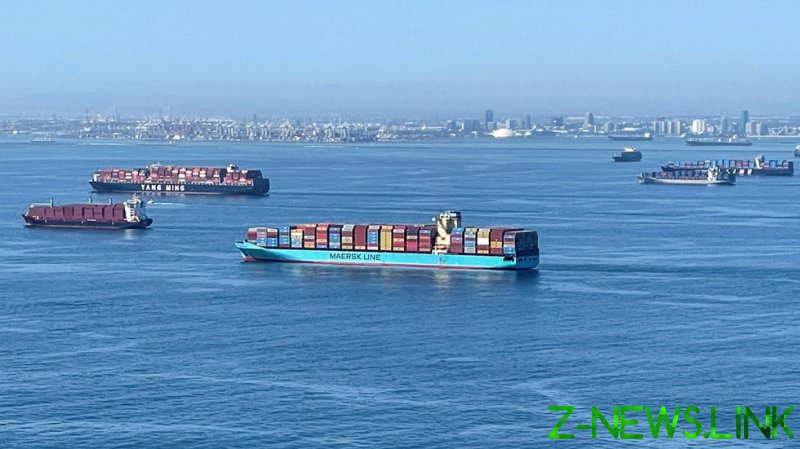 “Certainly, a lot of the challenges that we’ve been experiencing this year will continue into next year,” the former presidential candidate told CNN host Jake Tapper on Sunday.

Buttigieg tried to put a positive spin on the protracted crisis, arguing that it reflects surging US demand for consumer goods. “Retail sales are through the roof,” he said. “And if you think about those images of ships, for example, waiting at anchor on the West Coast – every one of those ships is full of record amounts of goods that Americans are buying because demand is up, because income is up, because the president has successfully guided this economy out of the teeth of a terrifying recession.”

Conceding that “our supply chains can’t keep up,” Buttigieg said the Biden administration is working with transportation industries to find solutions. For instance, President Joe Biden announced last week that the ports of Los Angeles and Long Beach, California – which handle a combined 40% of US-bound container ship cargoes – will start operating 24 hours a day, seven days a week. The administration also is working with state agencies to speed up issuance of licenses to new truck drivers.

Buttigieg made no mention of any possible effort to ease, at least temporarily, a California emissions law that has been blamed for contributing to the crisis. Much of the US trucking fleet doesn’t meet the state’s new emissions standards, which were imposed last year.

The supply-chain debacle has added to the struggles of an administration that already is dealing with a border crisis and the fallout from its deadly and chaotic military withdrawal from Afghanistan. With dozens of container ships forced to anchor off the California coast for as long as three weeks, the US is suffering shortages of consumer goods and materials needed by manufacturers to keep their operations going. As a result, the president has been ridiculed online as “Bare Shelves Biden” and “Empty Shelves Joe.”

Perhaps looking at the crisis as an opportunity, Buttigieg said the supply-chain failures prove that Congress needs to pass Biden’s $1 trillion infrastructure bill. “There are $17 billion in the president’s infrastructure plan for ports alone,” he said. “And we need to deal with the long-term issues that have made us vulnerable to these kinds of bottlenecks when there are demand fluctuations, shocks and disruptions like the ones that have been caused by the pandemic.”

Tapper pointed out that the Senate passed the bipartisan bill two months ago, and left-wing Democrats in the House have blocked it from advancing until their demands are met on legislation providing a $3.5 trillion spending spree on social programs. Buttigieg replied that “America needs both of those pieces of legislation.”

The CNN host also pressed Buttigieg on why – especially amid the supply-chain crisis – the Biden administration didn’t announce his two-month paternity leave and appoint an acting transportation secretary. The former mayor of South Bend, Indiana, who is gay, took leave in August to help his husband care for adopted infant twins. He will continue to take some time off for a few more weeks.

“The way this works is, there’s a deputy secretary, Polly Trottenberg, who is doing phenomenal work and, as deputy secretaries do, can fill in when a secretary is not available,” Buttigieg told Tapper. “Now, look, even though I’ve been on paternity leave and I’m proud of it, obviously, given the nature of my job, when you take a job like mine, you understand and accept that you’re gonna have to be available 24/7 depending on what’s going on, and you’re going to have to engage, and I did, even if that meant taking a phone call or making a decision from a hospital room.”

Republican lawmakers, such as Senators Tom Cotton (Arkansas) and Marsha Blackburn (Tennessee), criticized Buttigieg for being absent as US supply chains foundered and air travel was disrupted amid controversy over airline vaccine mandates. The transportation secretary also was mocked by Fox News Host Tucker Carlson, who said Buttigieg and his husband were “trying to figure out how to breastfeed. No word on how that went.”

Buttigieg fired back on Sunday, telling Tapper, “As you might imagine, we are bottle feeding and doing it at all hours of the day and night. I’m not going to apologize to Tucker Carlson or anyone else for taking care of my premature newborn infant twins. The work that we are doing is joyful, fulfilling, wonderful work. It’s important work.”

He praised the administration for its family leave policy and called for similar benefits to be made available to all Americans: “It is long past time to make it possible for every American mother and father to take care of their children when a new child arrives in the family.”