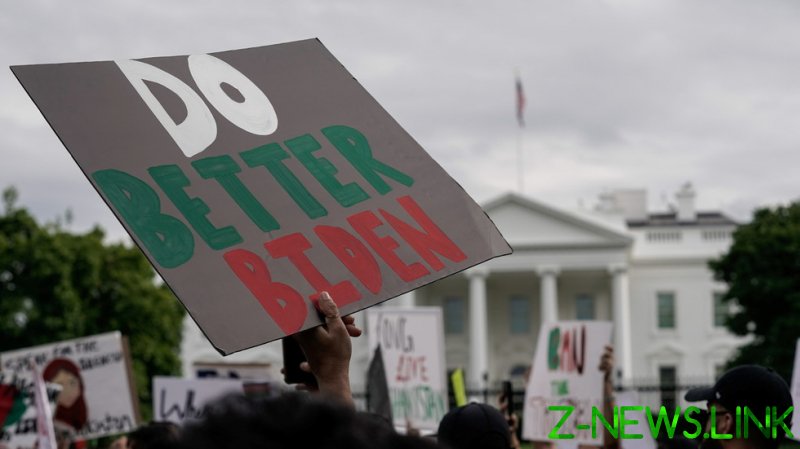 It has to be an irony above all ironies that the same man who, back in 1992, celebrated the demise of the Soviet “puppet regime” in Kabul ended up leading a US puppet regime there. Except, whereas Dr. Najibullah ruled for three years after the last Soviet soldier crossed the Friendship Bridge into Uzbekistan, Ashraf Ghani resigned and fled even before the last American boot left Afghan soil – reportedly forgetting bags of cash on the tarmac, no less.

What made the sudden and total collapse of the Afghan National Army (ANA) so devastating, however, is the explicit insistence of US leadership – from President Joe Biden and Secretary of State Antony Blinken to Chairman of the Joint Chiefs General Mark Milley – as late as two weeks ago, that it would never happen.

“There’s going to be no circumstance where you see people being lifted off the roof of an embassy in the – of the United States from Afghanistan,” Biden told reporters on July 8. Except that’s exactly what happened, and then some.

‘Saigon 1975’ is forever associated with the photo of desperate South Vietnamese mobbing a ‘Huey’ on the rooftop of the US embassy. There are several contenders for “Kabul 2021,” but so far the desperate Afghans clinging onto a US cargo plane – only to plummet to their deaths – seems a strong favorite.

“A thousand narratives collapsed in real-time,” as journalist and US Navy veteran Jack Posobiec put it. “DC theater gave way to reality.”

Afghanistan is often called the “graveyard of empires” because any outside power that tried to hold it eventually failed. That’s not strictly-speaking true – the British Empire survived the Kabul fiasco by a century, for example, and the idea that the USSR fell because of Afghanistan is a cynical narrative peddled by Washington’s Cold Warriors – but in this case, it may turn out to be.

Generals and enlisted men alike can argue the US forces never lost a battle in Afghanistan, but there’s no arguing with the fact that they lost the war. Moreover, the ANA folded despite tens of billions of dollars worth of US weapons and equipment and 20 years of training according to US standards.

Ever since the Soviet Union self-abolished in 1991, neoconservatives and neoliberals alike presented the American Empire as something inevitable, its political and economic system as the “end of history,” and all resistance to it doomed to failure. Just one word, “Afghanistan,” punctures that bubble.

As for prosperity, the countless treasure looted from Americans and poured into Afghanistan didn’t make the country wealthy, but it did keep a coterie of collaborators, transnational rent-seekers, and professional busybodies flush with cash and pretending to be useful. They built nothing and left nothing but misery in their wake; sandcastles melting before a tsunami.

“Every image coming out of Afghanistan this past weekend was an advertisement for the incompetence, arrogance, and double-dealing nature of American foreign policy leaders,” wrote journalist Matt Taibbi.

He went on to explain that the “genuine shock” on Tony Blinken’s face when confronted with reality “should tell people around the world something important about the United States: in addition to all the other things about us that are dangerous, we lack self-knowledge.”

In other words, the US political establishment got so used to creating its own reality and imposing it through media and entertainment, upon its own citizens as well as on foreigners, that it simply doesn’t know what to do when confronted with people on whom this trick doesn’t work – in this case, the Taliban.

This sort of thinking was on display last week, when a prominent “security expert” advised her colleagues to look away from the images from Afghanistan to avoid getting triggered or traumatized – as if what was happening would somehow stop or vanish if they just averted their gaze.

Except people around the world watched, and took notes. Even things entirely consistent with US mentality – such as flying dogs on passenger planes, while crowding local interpreters into cargo holds – sent an unmistakable message to any potential US ‘ally.’

Nor was such a conclusion reserved solely for foreigners critical of the US. Neocon Bret Stephens, writing in the New York Times, lamented the “fiasco of epic proportions” that told any US ally they’re on their own.

For an imperial enterprise built on narratives and perception management, this kind of reality bomb is highly likely to be fatal. There is no doubt that the US media machinery will launch a massive effort to deflect, spin and rationalize what happened in the coming days, perhaps even right after Biden addresses the nation on Monday. Maybe it will even work, on some people, for a while; copium is a powerful drug, after all.

Thing is, between what just happened in Afghanistan, and the years of the empire discrediting itself at home and abroad…it might not. Too many have now seen the emperor has no clothes, and that the narratives they were told to believe turned out to be smoke and mirrors.

What happens next is anybody’s guess.