America’s debt crisis could well shake the world. Cut off by sanctions & suspicion, Russia should ironically find itself insulated 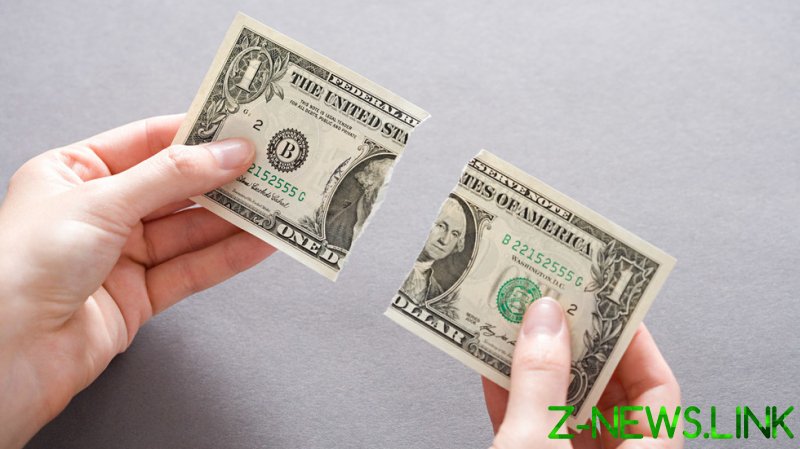 An American financial and currency crisis seems to be building, ready to flood the world and result in dramatic shifts in the international distribution of power. However, Russia has been preparing for the coming tumult, with a strategy that can be summarized as simply getting out of the splash zone. Besides ensuring fiscal discipline, the strategic partnership with China has focused on decoupling from the US-led international financial system.

Kicking the can down the road

The benefits that come with being able to print the world’s reserve currency are, sadly, also a curse. The US has been able to run massive deficits for years to have a living standard and an empire that was beyond its means, while politicians have been able to claim the imbalances were a sign of a healthy economy, evidenced by the willingness of the world to lend the US such vast amounts of money. The plague of printing the world’s trade and reserve currency is that it erodes the need for fiscal discipline as problems can be kicked down the road.

When the tech bubble of the 1990s burst, the US should have accepted the painful economic corrections by readjusting from a bubble economy to a real economy. Instead, interest rates were lowered to reinflate asset bubbles and thus transition from a tech bubble to a housing bubble that could fund the consumer-driven surge.

When it burst in 2008, the interest rates were lowered to near-zero and remain at this level 13 years later. The US has ever since been caught between a rock and a hard place as low-interest rates result in malinvestments and fuel economic inequalities as the rich can snatch assets cheaply, although increasing interest rates and restoring fiscal discipline would burst the bubble economy and diminish the role of the US in the international system. Thus, the solution to the crisis caused by excessive borrowing and spending was to borrow and spend even more to reinflate the bubble economy. The Global Financial Crisis was not resolved, but made much worse by delaying the day of reckoning.

The bubble burst by a pandemic

It is usually difficult to assess what will prick the bubble as it can be something minor (such as the failure of subprime loans) that unravels the larger house of cards with deteriorating fundamentals. However, the issue this time has been nothing less than a global pandemic that resulted in a closure of the global economy, coupled with an economic war against China.

America must not only recover from the pandemic, but it must also recover from a collapsing bubble economy that has gradually deteriorated over the past decades. The US national debt has ballooned from $5 trillion in 2001, to $10 trillion in 2008, and will any day now cross over $29 trillion.

With near-zero interest rates and no more tools in the toolkit, the next financial crisis will predictably be a crisis of the dollar. The response to the Global Financial Crisis in 2008 was bailouts amounting to a few hundred billion dollars, which devastated the US middle class and fueled populist movements on the political left and right. Currently, the US is moving towards a $3.5 trillion “reconciliation bill.” The Biden administration is even pawning Washington’s political legitimacy by attempting to reassure the American people that the reconciliation bill “will pay for itself.”

Mass inflation commonly follows great wars as the production capacity is destroyed by warfare and money is printed in an effort to restart the economy.

If productivity and value creation decreases when the money supply increases, the predictable result is that inflation spirals out of control to an extent that may destroy the currency.

The pandemic has a similar dynamic as war, since productive powers are reduced and the economy is aimed to be restarted with fiscal stimulus. The US stimulus is not only excessive and unnecessary – pumping an abundance of new money to reinvigorate the consumer economy results in increasing Chinese production. Shipping from China to the US has increased by many multiples, and US ports on the West Coast are struggling to unload the amount of cargo. For the American public, these policies result in devastating inflation. When borrowing and spending produce rising GDP figures, even wealth destruction can be portrayed as wealth creation.

The coming crisis will likely be a crisis of the dollar. At some point, the US will be forced to restore a fiscal discipline that was lost long ago. That entails increasing production and reducing spending – the exact opposite of current policies. This painful readjustment will reduce the standard of living of Americans and diminish the role of the US in the international system. It appears that the option of making voluntary and somewhat orderly adjustments has expired, and market forces will compel the US to make corrections in a disorderly fashion.

Russian preparations for a US financial crisis

Russia and China began to make preparations when it became evident in 2008-9 that the US would kick the can down the road instead of restoring fiscal discipline. Putin denounced the US as a “parasite” in the international financial system, and China began to call for a post-Western world and incrementally decoupled from the US-led financial system.

The silver lining of the anti-Russian sanctions has been that they compelled Russia to make painful adjustments. Over the past years, Russia has repaid its debts and exercised strict fiscal discipline. The Russian-Chinese de-dollarization initiative has resulted in Russia and China becoming the largest procurers of gold, trading increasingly in local currencies, and reducing the share of dollars in their foreign reserves. New financial instruments have also been developed, ranging from new investment banks, regional alternatives to the SWIFT transaction system, local credit rating systems, and credit card agreements.

Preparations for the financial crisis also entail preparations for political consequences. As financial crises erode socio-economic and political stability, the US government will likely point to external forces to restore solidarity and loyalty to authorities. Simply put, Washington will likely point to Russia and China as the culprits of the financial and economic crisis, which can have unforeseen consequences. The US has to a large extent had a “healthy nationalism” in terms of believing that its best days were ahead of it. In contrast, the more dangerous nationalism looks towards past glories that were robbed by foreign powers. Trump is likely only the first president to argue that US greatness has been stolen by China, while Russia will be blamed for rising energy costs.

In short, Russian politicians will be hoping their country can weather the storm simply by severing ties with the sinking ship.