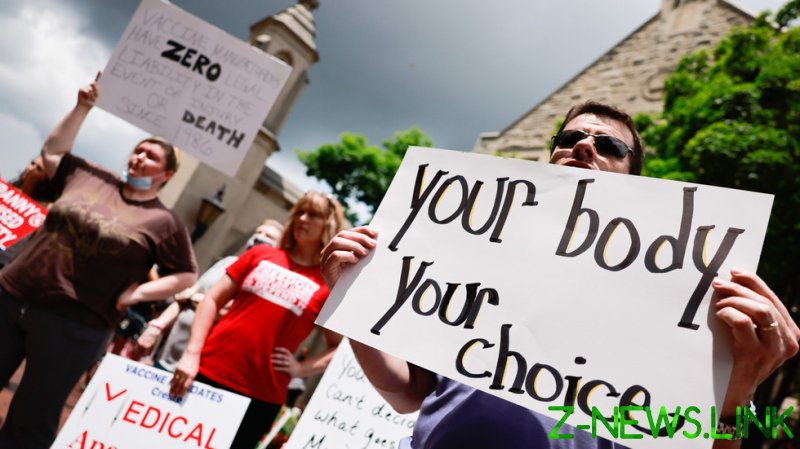 Nearly 80% of Democrats agreed that employers should be able to force their workers to get Covid-19 shots, according to a CBS News-YouGov poll released on Sunday. In contrast, only 39% of Republicans approved of giving businesses such authority over their employees’ medical choices. The overall response was 56-44 in favor of forced jabs.

Supporters of the two major parties are more split on vaccine choice than on Covid-19 inoculation in general. While 95% of Democrats have already been vaccinated or are at least considering it, 71% of Republicans are on board or thinking about taking the jab, the poll showed.

That result suggests some improvement in vaccine acceptance in the past two months. A Monmouth University poll released in mid-April indicated that 43% of Republicans don’t intend to get vaccinated against the virus. In the CBS News-YouGov survey, 29% of Republicans said they had ruled out the shots. Overall, only 18% of respondents said they won’t get vaccinated, while 71% said they had either already gotten a jab or planned to do so. The other 11% were undecided.

The issue of employer-mandated vaccination is heating up, as a Texas judge on Saturday issued the nation’s first federal court ruling on whether workers can be ordered to receive Covid-19 shots.

The judge dismissed a lawsuit against the Houston Methodist hospital system, in which employees argued that they faced wrongful termination of their jobs for refusing to receive Covid-19 vaccines. The ruling, which will likely be appealed, affirmed the hospital system’s right to mandate vaccination, even though the three inoculations available in the US have received only emergency use authorization, not full FDA approval.

Ironically, while Democrats are pro-choice on abortion, it’s Republicans who favor individual choice on vaccination. A Pew Research Center poll released last month showed that 80% of Democrats and 35% of Republicans said abortion should be legal.

Those who won’t get vaccinated are the boldest about returning to pre-pandemic activities, with 59% saying they’re comfortable going to large events, compared with 45% of all respondents. Among those who are fully vaccinated – and therefore presumably the most protected from infection – only 42% were willing to risk the crowds at a large event.

While 56% approved of employer-mandated vaccines, even more wanted forced jabs when their own safety might be at risk. Asked what large event venues, airlines and cruise ships should do, 65% of respondents called for mandatory worker vaccinations, and 57% agreed with making customers get their shots or be shut out.