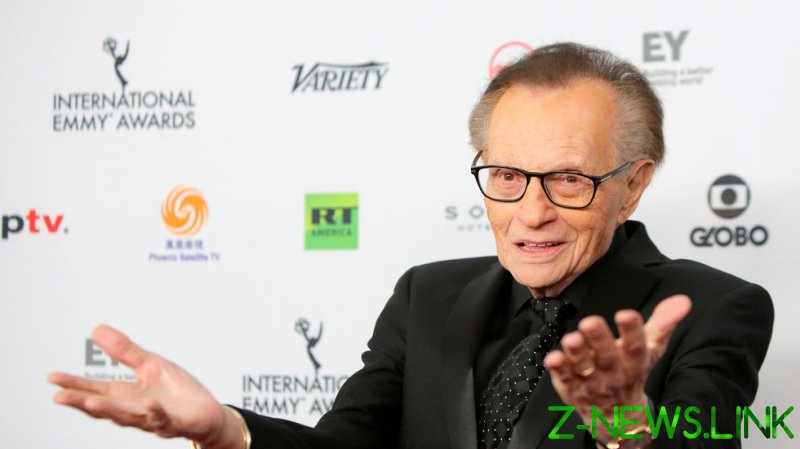 King, 87, is reportedly being treated in isolation, so his estranged wife and other family members aren’t allowed to visit him. But RT has learned that his condition isn’t severe enough to require use of a ventilator.

King is at high risk for complications from the virus not only because of his age, but also because he has previously suffered bouts with stroke, a heart attack, diabetes and prostate and lung cancer. He’s reportedly been battling his latest illness for 10 days.

King’s long-running CNN interview show, Larry King Live, made him one of the most prominent media personalities in the US.

In more recent years, the veteran interviewer has been running his Politicking show, broadcast by RT America ever since it has struck a deal with the New York-based production company, Ora TV, which King co-founded in 2012.

Two of King’s adult children died in 2020 – son Andy, from a heart attack, in July and daughter Chaia, from lung cancer, in August. “It is with sadness and a father’s broken heart that I confirm the recent loss of two of my children, Andy King and Chaia King,” he said in August. “Both of them were good and kind souls, and they will be greatly missed.”

King’s career as a journalist and interviewer spans more than 60 years. He rose to prominence with a late-night radio call-in show, starting in 1978, then began a 25-year run with his CNN show in 1985. The Brooklyn native has won Peabody awards for his radio and television shows, as well as an Emmy award, and he was inducted into the National Radio Hall of Fame in 1989. Talkers Magazine named him the top television talk-show host of all time in 2002.