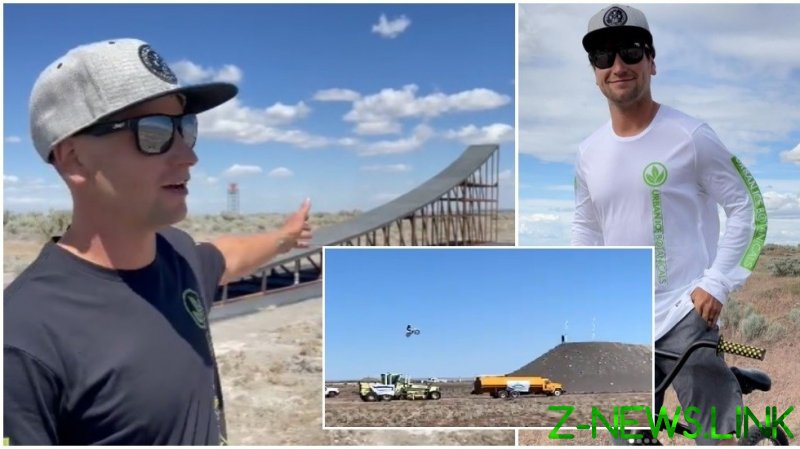 Harvill, 28, had been bidding to fly more than 351ft (107 meters) through the air to break the record for a jump from a moveable, pre-built ramp onto a dirt ramp at Grant County International Airport on Thursday.

However, Harvill suffered a bad landing on a practice run which sent him over the handlebars. The stunt rider landed about 20ft away from his bike and was without his helmet after it had flown off his head, the Columbia Basin Herald reports.

Harvill was rushed to hospital but died of his injuries. Grant County Sheriff’s Office spokesperson Kyle Foreman said an autopsy would be carried out on Friday, although it was not immediately clear whether Harvill had died at the hospital or had already passed away before his arrival.

Footage circulating on social media and shared by the likes of US outlet TMZ showed the moment of the fatal crash.

“Everyone was already here for him in case this happened,” said Grant County International Airport Director Rich Mueller.

“Obviously we didn’t want to see him crash today, but we were ready for it.”

In comments made before the tragedy, Harvill’s wife Jessica was quoted as saying that she understood the risks here husband took.

“It’s a little scary from time to time, but you’ve gotta trust that he knows what he’s doing,” she said.

“I’ve been around it so long it’s kind of just normal in a way, even though that sounds weird, because it’s totally abnormal.”

The harrowing scenes came just one month after the arrival of the couple’s second child. According to local media reports, Jessica Harvill had been at the airshow with their children Willis, 5, and newborn Watson.

In an interview posted on the Moses Lake Airshow Facebook page just a few weeks ago, stunt rider Harvill said: “I’ve loved motorcycles my entire life and all this has started from racing dirt bikes.

“Moses Lake sand dunes was a place I went quite a bit, especially in the winter when there was nowhere else to ride. The sand is really good.

“That really started my jumping, was out at the Moses Lake sand dunes so it’s amazing to be able to have an event there that I can jump at.

“It all started with a love of dirt bikes and me pursuing the dream of knowing what I can do jumping and the love of jumping that’s come from dirt bikes.

“For me it just goes hand-in-hand, jumping as far as you can and racing and being as good as you can.”

Harvill had previously set a world record in 2013 when he jumped 297ft from one dirt ramp to another.