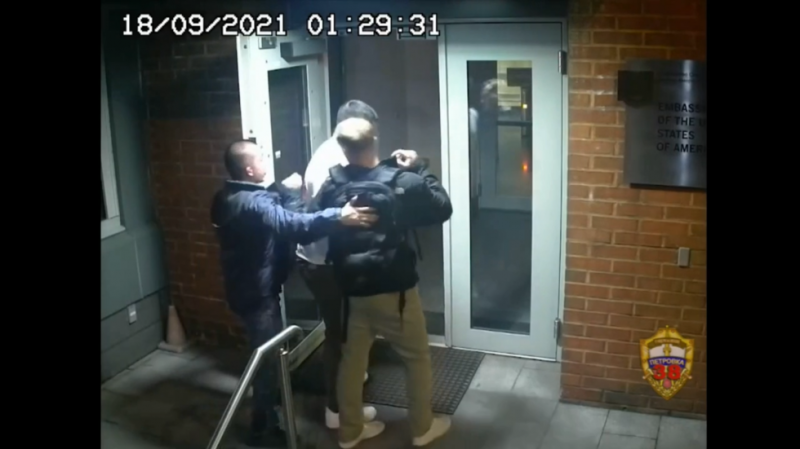 Diplomatic spokeswoman Maria Zakharova said on Sunday that authorities had made a protest to the consulate over the incident. “Given that the suspects turned out to be employees of the US Embassy and have immunity, a note was sent from the Foreign Ministry,” she said.

“As part of this, the American side was given the option to lift the immunity of the suspects, or have them leave Russia immediately,” she said. “As far as I understand, they took the second option.”

In CCTV footage released by investigators, the trio can be seen stumbling out of a venue at 1:13am last month. Footage shot by a second camera outside the US embassy shows the group returning to the diplomatic mission, with the most unsteady of the three carrying a black backpack.

The bag was later reported missing by its owner Dmitry Kornilov, a local resident who had placed it under the bar while he went to the bathroom. “There were business cards, and documents inside that had a phone number and email, and they could have written and said they would return it,” he said. “I was even prepared to give some kind of reward for it, but the guys didn’t call.”

Kornilov went on to say that he considers the incident to have been a mix-up, rather than a theft, but without the embassy dropping the Marines’ immunity, investigators are unable to probe further. The bag has since been returned.

Last year, 29-year-old ex-Marine Trevor Reed was handed nine years in a Russian jail after attacking two police officers during a booze-fueled rampage in Moscow. “This is completely a political case,” Reed insisted at the time, insisting he had blacked out and had no memory of events.

In July, another embassy employee was sent home to avoid facing criminal charges after footage showed him dismantling a railway signal outside the city of Tver. He reportedly loaded the piece of equipment into a car with diplomatic plates and drove off. Zakharova said that the incident was bizarre, but that “the danger to which the American exposed the lives and safety of train passengers is not at all funny.”