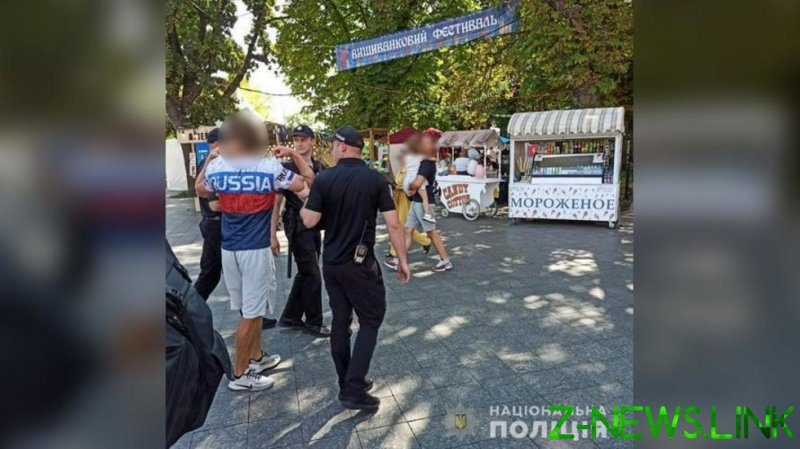 In a statement issued on Monday, the regional police headquarters confirmed that a 26-year old foreign citizen had been arrested for “disturbing public order.” According to officials, “during the unfurling of the Ukrainian flag on the Potemkin Stairs, the man behaved defiantly and provoked a conflict with people taking part in the event.”

“Unresponsive to the demands of law enforcement officers to stop his illegal activity, the man tried to escape as soon as he was taken to the police station,” it went on. The man, who has not been named, is currently being questioned and is set to be charged with hooliganism.

In a video of the incident, published online, the suspect, wearing a T-shirt emblazoned with the word “Russia” and the country’s flag, can be heard telling the police to “keep crying,” and insisting that “you’re a Nazi.” While no details have been formally communicated by the police, he appears to be speaking with an American accent and local media has reported that he is a US citizen.

In another clip from the scene, he denied any wrongdoing, saying that he had “just been walking around and was detained by the police. Is this freedom in Ukraine?”

In December, a Russian-speaking Ukrainian citizen was detained in the eastern Ukrainian city of Lviv for wearing a traditional faux-fur ‘ushanka’ hat with the symbol of the Soviet Union on it. The 19-year old-man now faces up to five years behind bars for breaching strict local laws governing “the use of communist symbols on clothing.” He claims he had bought it at a flea market to keep his ears warm in the wintry weather.