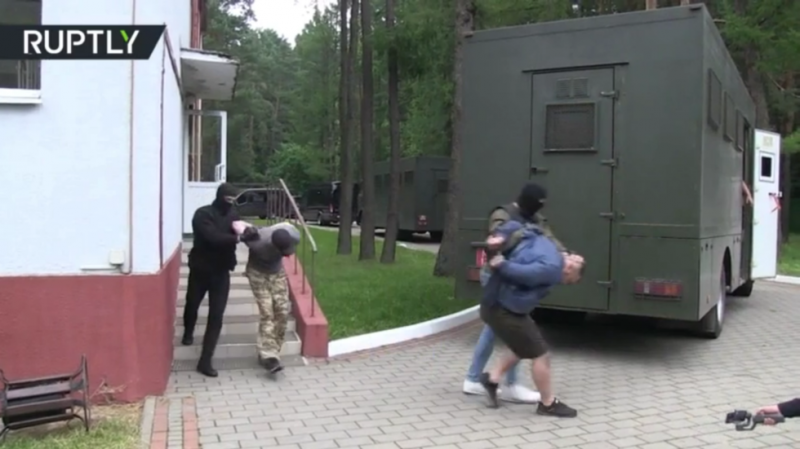 The broadcaster, which is known to have a close relationship with members of Washington’s intelligence community, alleges that Kiev’s spooks conspired to convince authorities in Belarus to arrest a group of 33 Russians last June on charges that they were planning to interfere in the country’s upcoming elections. Three “former high-ranking Ukrainian military intelligence officials” are said to have revealed “how they orchestrated the extraordinary operation aimed at luring suspected war criminals out of Russia to face prosecution for atrocities committed in Eastern Ukraine.”

According to CNN, the arrests, which damaged relations between Moscow and Minsk, were part of “an elaborate intelligence sting by Ukraine, with the knowledge and alleged support of the United States.” Operatives reportedly posed as representatives from a private military company, offering large sums for non-existent security work, in an effort to lure mercenaries out of Russia. Ukrainian officers are said to have then sifted through the applications for those they believed to have fought in the country’s bloody civil war alongside troops loyal to the two self-proclaimed Donbass republics.

Former Kiev intelligence officials who reportedly spoke to CNN alleged that “the Ukrainian-led operation got US cash, technical assistance, and advice from the CIA on how to draw the Russian mercenaries in.” However, Washington has apparently denied these claims, saying any suggestions it was directly involved in the operation were “false.” Instead, an unnamed American source seemingly told journalists that the country had been aware of the operation, but had not played an active part in it.

The source also purportedly told the reporters that Ukraine’s “efforts to implicate US agencies may [have been] an attempt to share, or even pass, blame for what was a high-risk Ukrainian operation that went wrong.” After the suspects were arrested by Belarusian officers on suspicion of election interference, Minsk rejected requests from Kiev to extradite the group and, following a phone call between veteran Belarusian leader Alexander Lukashenko and Russian President Vladimir Putin, the men were allowed to leave the country and return home.

In a statement issued on Wednesday, a spokesperson for Russia’s top domestic security agency, the FSB, told reporters that “we can fully confirm this information published by CNN – it is absolutely reliable.” According to the official, “they have very objectively shown the role of the CIA” in the operation.

Ukraine has previously publicly denied that the arrests were part of a plan by its spy agencies. In June this year, Ukrainian President Volodymyr Zelensky insisted that Kiev had been “dragged into” the row only after allegations the men were wanted for fighting in the Donbass came to light. “I understand that the idea of this operation was the idea of, let’s say, other countries [and] definitely not Ukraine,” he added.

The CNN investigation appears to add weight to previous allegations that the country had far more involvement than Zelensky let on. In the days following the arrests, Russia’s Komsomolskaya Pravda newspaper claimed that a paper trail from the operation led directly back to Kiev. The airline tickets for the group of purported mercenaries had been booked by travel agencies in Ukraine, it alleged.

Meanwhile, Kiev-based news platform Ukrainska Pravda spoke last year of an even more elaborate plan. It said the original plan was for the men to fly from Minsk to Istanbul, with their plane being forced to make an emergency landing in Ukraine due to a passenger falling ill (this individual would have been a member of Kiev’s KGB successor agency, the SBU). The Russian citizens would then have been arrested on Ukrainian soil, in a maneuver similar to a subsequent Belarusian operation to capture opposition activist Roman Protasevich. That incident resulted in Western sanctions against Minsk.

According to Komsomolskaya Pravda’s investigation, the intention of Ukraine’s SBU was to target a notorious and controversial Russian private military company, the Wagner Group, as well as to disrupt relations between Minsk and Moscow. The plan could potentially have worked, it said, had the Belarusian authorities not been convinced by Russian counterparts that the group had no interest in rigging the country’s election, which opposition figures and many international observers later said was manipulated by Lukashenko’s government in his favor.

This article was updated on September 8, 2021 to incorporate a new statement from Russia’s FSB security agency.