American died from detached blades of the helicopter. Video 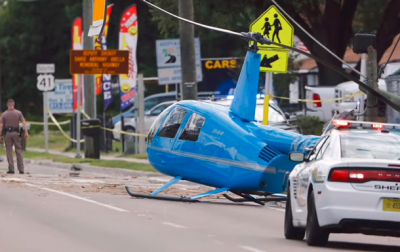 Passenger car killed a torn blade of a helicopter that made an emergency landing on the highway.

In the American plant city man was killed with a torn blade of a helicopter that made an emergency landing on the highway.

Because of engine failure, the helicopter pilot Robinson decided to urgently take the highway. Due to the hard landing one of the blades hit a telephone pole, broke and bounced in passing near the car.

See also:  Simulated the number of victims of nuclear strikes on the planet. Video

A piece of a propeller blade of the helicopter flew through the intersection and struck the windshield of a pickup truck, hitting a 72-year-old man who was sitting in the passenger seat.

He died instantly. The driver of the car were injured. The injured helicopter pilot. Both were hospitalized.