Home / WORLD / ‘America: The Motion Picture’ is so stupid it actually thinks it’s smart… just like the country it parodies

‘America: The Motion Picture’ is so stupid it actually thinks it’s smart… just like the country it parodies 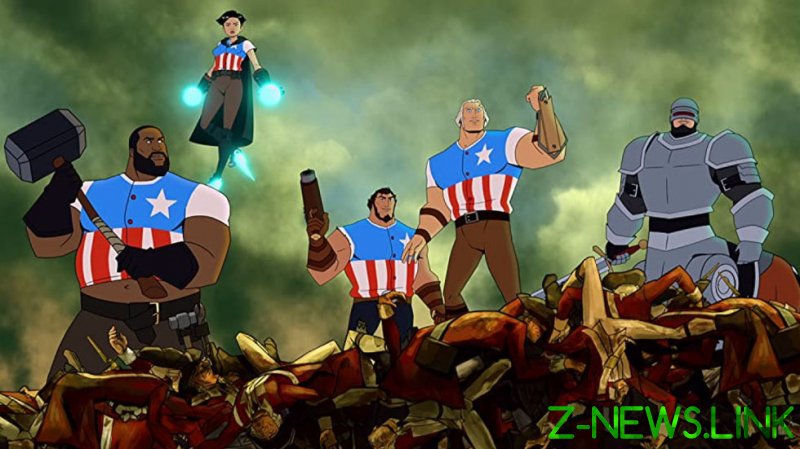 ‘America: The Motion Picture’ is a new animated feature film on Netflix that parodies the founding fathers and the American revolution.

The movie, directed by Matt Thompson and written by Dave Callahan, boasts a stellar voice cast of Channing Tatum, Bobby Moynihan, Will Forte, Olivia Munn, Simon Pegg and Andy Samberg, among many others, and some imaginative animation.

Just to give you a taste of the absurdity and idiocy on display in this film, here’s a brief rundown of the plot…

George Washington and Abe Lincoln are best friends, and when Benedict ‘Cosby’ Arnold, who is a werewolf, slaughters the signers of the Declaration of Independence, steals the document, and then murders Lincoln at the Ford Theatre, Washington vows revenge and to stop the British Empire from taking over the world.  Oh, and Washington has chainsaws that pop out of his arm like a founding-father Wolverine when he does battle.

Washington then gets his team together, which include Geronimo, Thomas Edison (who is a Chinese woman), Sam Adams (who is a party-hound frat bro), and Paul Revere (who is friendless and quite possibly a human/horse hybrid), to fight back.

The plot staggers around like a drunken hobo from one extraordinary inanity, such as when King James comes to America on the Titanic to finish his super weapon, to another, such as when Paul Bunyan boxes with Big Ben as double-decker buses transform into Imperial Walkers.

Of course, that all sounds incredibly stupid, but the stupidity is the point. The filmmakers are trying to not only make a parody of the American myth, but also to satirize the historical ignorance of the viewing population.

As intentionally absurd as the plot of ‘America: The Motion Picture’ is, the joke is that there are probably lots of people who will think – Washington’s Wolverine chainsaw hands aside – that it’s somewhat true, no doubt duped by the official “based on actual history” tag that opens the movie.

The problem with ‘America: The Motion Picture’ isn’t its endless adolescent humor, which includes a plethora of sex jokes, gay sex jokes and inter-species sex jokes, or that it makes fun of the founding fathers – anyone sensitive about sacred cows like Washington and Lincoln being comedically desecrated is ridiculous – but that it’s so condescending enough to think that only the ‘other side’ is filled with ignoramuses.

This bias, which caricatures only the fools, flag wavers and rednecks who spontaneously sing the national anthem at Walmart as the idiots, is the movie’s glaring ideological blindspot.

Yes, those that buy into the star-spangled myth are, in my opinion, worthy of being mocked, as they often reflexively take a shortcut to thinking and buy into America’s militarism and belligerent foreign policy, and adorn themselves with buffoonish bumper sticker slogans like ‘these colors don’t run’ and ‘love it or leave it.’

But let’s not kid ourselves, no side in the American cultural and political landscape has a monopoly on stupidity. ‘Too cool for school’ liberals are just as moronic as their conservative counterparts.

For example, it was liberals who screeched about Donald Trump’s ‘war on the press’ but then cheered Julian Assange’s imprisonment and torture. It was the liberals in the media that shouted down any talk of the Wuhan lab leak theory as racist. It was liberal medical professionals and scientists who declared that gathering in crowds during Covid lockdown was deadly, unless it was to protest for Black Lives Matter. It’s woke liberal jackasses who think the solution to their imagined pandemic of anti-black racism is to force everyone to identify with their race – even though America is an overwhelmingly white country. It’s these same liberals that over-estimate police killings of black people by over 10 times, 100 times and some even 1,000 times the actual rate.

And remember, it was the majority of Americans, both left and right, that, unlike me, wholeheartedly embraced the disastrous and murderous Iraq War, Ronald Reagan and Bill Clinton’s financialization of the economy and free trade – which gutted the working and middle class – and who fell for not only George W. Bush’s normalization of trade relations with China but also his post 9-11 ‘War on Terror’ scaremongering, as well as Barack Obama’s smoke and mirrors marketing campaign known as Hope and Change.

The bottom line is that the Covid pandemic has slowed down, but the pandemic of stupidity in America is accelerating at an astonishing rate across party, ideological, racial and class lines

As for the dopey America: The Motion Picture, it’s a perfect representation of America because it’s so stupid it thinks it’s smart. By the way, the movie isn’t just dumb, it’s dreadful and gratingly unfunny, so like American lectures on ‘exceptionalism’ and ‘democracy’, you can skip it. You’d be better served watching Mike Judge’s prescient 2006 film ‘Idiocracy’, which at this point feels like a documentary.