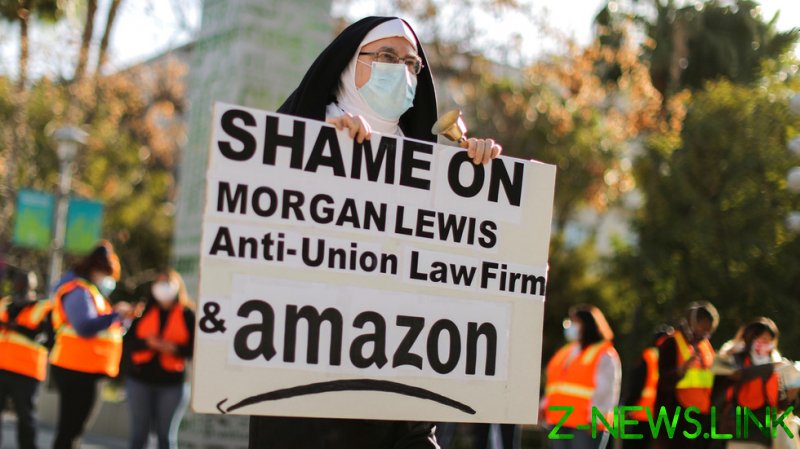 The Retail, Wholesale and Department Store Union (RWDSU), which Amazon’s Bessemer employees had hoped to join, has announced on Friday that it would be filing suit with the National Labor Relations Board to overturn the results of their latest unionization drive. The retail giant had “created an atmosphere of confusion, coercion, and/or fear of reprisals and [had] thus interfered with employees’ freedom of choice,” RWDSU argued.

Some 30% of workers voting “yes” was seen as a victory by some labor experts – the actual number of uncontested ballots came in with 1,798 to 738, though several hundred more ballots have not been counted. While the union has the right to demand another election, anti-union legislation currently in Congress may make it even harder to win next time.

Amazon employees were forced to attend lectures “filled with mistruths and lies” and told joining a union would force them to pay dues they couldn’t afford (presumably because of their Amazon salary). In reality, Alabama law means unions can’t deduct dues without a worker’s consent, while unionized workers earn about 11% more than non-union workers in their industries.

Meanwhile, wherever employees entered the massive Alabama campus, they were visually assaulted by anti-union propaganda, from posters in the bathrooms to anti-union t-shirts the company passed out (and presumably expected workers to wear).

After the NLRB forbid Amazon the right to have a mailbox installed on warehouse grounds, ostensibly to encourage the voting by mail union organizers had requested, the company actually arranged with the US Postal Service to install and modify a box itself. Employees complained it felt more like a constant reminder that Big Bezos was watching than a voting convenience, and many expressed confusion as a message on the box insisted voting must be done by March 1 instead of the real deadline, March 29.

Amazon, which hired $3,200-per-day union avoidance consultants in the hope of derailing the Bessemer movement and was clearly willing to expend its resources for the effort, even appealed to Jefferson County, where Bessemer is located, to have the timing changed on a traffic light near the warehouse. As employees waited for the light to change, organizers had previously grabbed a few seconds to explain the benefits of unionizing to them before they started work. The company was so brazen it sent out ‘step-by-step’ mailers instructing Amazon employees how to vote in a cartoon graphic complete with a not-so-subtle exhortation to voting “no.”

RWDSU leader Stuart Appelbaum lamented that Amazon was using its considerable resources to “dehumanize” employees, treating them like the robots the workers shared their space with. Had Amazon been defeated in the election, warehouse employees around the nation (if not the world) might take the initiative and try to organize their own workers – a possibility Amazon, one of the wealthiest companies on earth, seems to fear more than anything else.

Should workers, at Bessemer or elsewhere, succeed in unionizing Amazon employees, it would be a major blow to Silicon Valley, which despite its wealthy ‘liberal’ image relies frequently on independent contractors, warehouse and logistics workers, drivers, and all manner of low-paid workers to create the effortless, smooth-cornered look they present to the world. RWDSU has already been contacted by over 1,000 American workers who are hoping to start an organizing movement at their own workplaces.