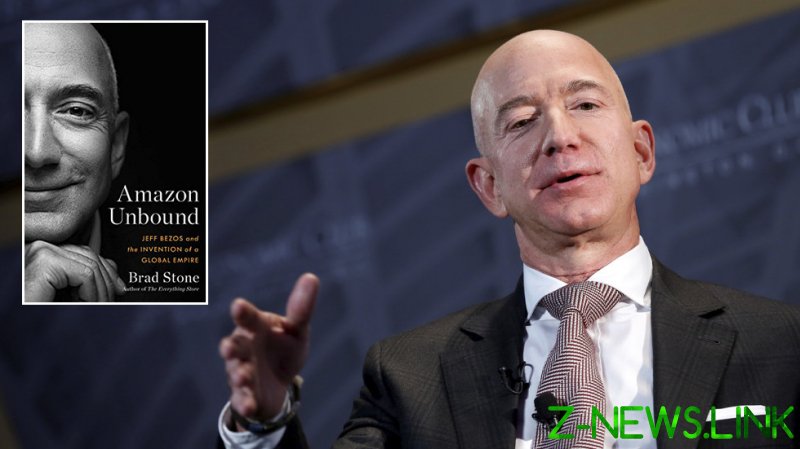 When megabucks gazillionaire Jeff Bezos began including helicopter pads in the building plans for Amazon’s ever-expanding property empire, it was a sure sign that the man who turned bookselling into the biggest business on the planet had broken free of his moorings.

Bug-eyed Bezos was smitten with the new woman in his life, TV host Lauren Sanchez, a newly-qualified helicopter pilot, so it meant plans for a second Amazon headquarters in Long Island City – a decision later reversed – and even the massive luxury yacht being built for the couple under close guard in Rotterdam just simply must have space to land a helicopter.

Of course the game was up instantly, as author Brad Stone notes in the freshly-published Amazon Unbound, because while the business giant had untold reach across the internet, provided cloud services worth billions and produced hit Hollywood movies, there were no helicopters within his company. After all, what sort of frugal, down-to-earth, man-of-the-people uses a helicopter for that commute to work?

But Bezos was no longer that man, despite what the huge staff of Amazon’s PR department might wish anyone to believe. And it’s not the TV star girlfriend, the newly-pumped biceps or the wish to soar above the choking traffic of the poor people below that signalled Jeff Bezos had arrived on a different plain.

For me, and probably many readers of Stone’s great book, it was the welcome letter given to all new hires at Bezos’ Blue Origin space rocket business. While the content outlined the scope of ambitions, those new employees who received the letter were required to read it and reflect on it, and job seekers, according to Stone, “were even asked to write essays reflecting on the depth of their passion for the Blue mission, and were turned down if their yearnings were seen as not devotional enough.” This is cult of personality stuff.

And as if that’s not bonkers, Bezos also devised an elaborate coat of arms for the letter – delusions of grandiosity, anyone? – which featured two tortoises standing on the Earth and appealing to the stars over an hourglass with wings, all accompanying the company’s hilariously naff Latin motto, ‘Gradatim Ferociter’ (step by step, ferociously). Someone, clearly, had been at the Harry Potter box set.

Bezos seems to believe that sending people into space, winning billion-dollar US government defence contracts, providing technology to other space programmes and vainly attempting to outgun his competitor for the title of King Nerd, Elon Musk, will be his legacy.

Stone relates the Bezos dream: “The goal was a trillion humans one day living and working throughout the solar system on space stations that operated on the plentiful power of the sun.” All thanks to Jeff.

The thing about this grand vision, as the author noted, is that it’s a useful ambition for the world’s wealthiest person “whose charitable contributions were now the subject of constant scrutiny and criticism. Instead of an e-commerce kingpin with an expensive hobby, Bezos was a great industrialist making a grand gift to humanity.”

What about money to address a housing squeeze created by Amazon in Seattle? That’s chump change for losers and local bureaucrats. Let’s do something fun and adventurous like mine rocks on the Moon instead!

While many of Amazon’s former employees, largely men who made untold wealth on the back of a company that is today worth $US1.76trn, are reluctant to bitch about their ex-boss, the story of the astronomical rise of Bezos – and the decisions he has made along the way – speaks volumes.

Blue Origin and the cash cow that is Amazon Web Services aside, there is Amazon’s starstruck foray into Hollywood movie production and the various dealings with #MeToo villains such as Harvey Weinstein, Roy Price, and Woody Allen. A world away from La La Land, Stone addresses the sackings of whistleblowers at Amazon fulfilment centres upset at working practices during the coronavirus pandemic, the swift retribution against union organisation at those depots and the all-too-clever employment contracts with delivery drivers that make working for the online behemoth anything but a dream job.

Stone uncovers the sharp practices, still under investigation in Europe and the US, where Amazon is alleged to have used sensitive customer behaviour to inform its development of own-brand merchandise, giving it an unfair competitive edge. There’s also the opening of its market place to wildly unregulated Chinese sellers who have flooded the internet with cheap knock-offs and pirated items in collaborative efforts at globalisation, not necessarily to improve customer choice, but more so Bezos can make a buck.

While he used to declare Amazon was all about the customer, anyone – like me – who uses the site regularly knows that is no longer the case. Those sponsored adverts that bedevil the search results of anything you want are a massive revenue stream for Amazon, while an annoyance to its customers. Amazon Choice endorsement? Stone discovered that the badge of honour goes to those sellers prepared to undercut the most, not to the best product, and in many cases, that’s Amazon itself with its discounted own-brand merchandise. Valueless.

And then there’s the paid online advertising, using your previous history data to track and feed you up selections from those sellers prepared to pay Amazon for the privilege. All while you pay for a Prime account for expedited delivery, ask Alexa for the weather forecast, scan the Ring app when an Amazon courier knocks on the door with more junk, and flick between offerings on Prime Video incessantly looking for something on TV. Having read Amazon Unbound, maybe it’s time to rethink all this.

The experience of former marketing chief Meghan Wulff is telling. She finally decided she’d had enough of the Amazon rollercoaster and wanted off in 2019, having decided “Jeff Bezos too often didn’t make admirable decisions.”

She questioned her own role in helping to create the online shopping extravaganza that is Prime Day, agreeing with one business magazine assessment that it “cynically manipulated shoppers into buying things they didn’t need.” That could be a sentiment destined to resonate beyond a single disillusioned marketing executive.

Upon leaving Amazon, Wulff cancelled her Prime membership, recycled her Amazon Echos, and closed her Amazon account permanently. Thanks to the insights afforded by Brad Stone’s book, maybe that’s not such a bad idea.