Home / Society / Although Lukashenko a dictator, but he should learn how to protect people’s lives 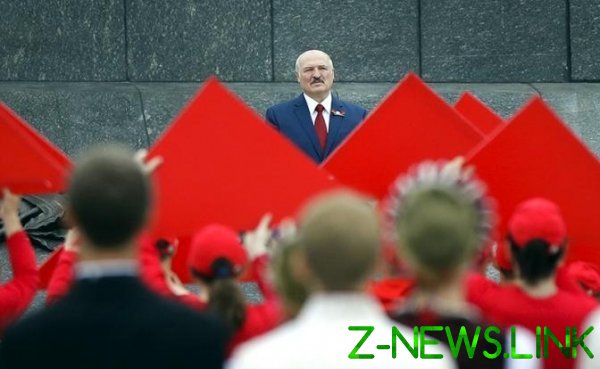 On the photo: President of Belarus Alexander Lukashenko during the ceremony of laying flowers to the Eternal flame at the independence Day of Belarus (Photo: Sergei Grits/AP/TASS)

The dictatorship of the President of Belarus Alexander Lukashenko has reached unprecedented limits: he is the demiurge, manages the fundamentals of life. How else to explain that the mortality of infective virus in the country is 4.5 per 100 thousand people?! And this despite the fact that there was no forced isolation of healthy people under threat of fines or digital surveillance, no closure of anything and everything — from the benches and gardens to universities and schools.

These measures against plague is actively used by officials in Russia, but did not help to save human lives at least at the level of Belarus. Mortality in Russia from the coronavirus was 6.9 per 100 thousand people. Despite the fact that the financial, media and other resources thrown at the location of the virus, we had spent a lot more.

Maybe Lukashenko “tinkering” with statistics? But, first, in such a small country is impossible to hide anything; and, secondly, the delegation of the world health organization visited Belarus and crime have not found.

The celebration of Easter, may day and Victory day Parade the epidemic is also not lit. Not because Belarusians unshakable health and not because of “hypnosis” Lukashenko said. Worked by three factors: the clarity of public administration, the Soviet system of health and discipline of the people. The consciousness of people always goes up when they see the logic in the decisions of the authorities, and not just a desire to make trouble on the next billion or drive “the herd” under the digital “stick”, using the epidemic as an excuse.

The origin contagious the virus is still unclear. The Russian President said that “we need to counteract what happened. Not rassusolivat on the topic about where it came from”.

Sounds lame. It’s as if when you spill diesel fuel in Norilsk decided not to look guilty, but only to eliminate the consequences of the disaster. Clarity with the coronavirus required — in the interests of science and society.

What are the consequences of the epidemic for economic activities? Academician Sergei Glazyev, speaking at a session of the Moscow economic forum “Covid is changing the world. Improvement of Russia — economic, psychological and social”, has published the data concerning the decline in production. Of the States members of the Eurasian economic Union, the least affected Belarus. The country remained within the limits of financial sustainability.

As for Russia, Kazakhstan, Kyrgyzstan and Armenia, the average figure is the “collapse” of 20% of GDP. Will either have to spend reserves, as is happening, or to increase the debt.

And now utopia. Imagine that all the countries of the Eurasian economic community since the beginning of March 2020 would go differently than recommended by the who, road. Namely, the retained business activities to the max; not closed the border between the States of the Union; instead of scaring people quickly gathered regional medical-epidemiological structure of specialists-virologists to develop drugs and vaccines.

Disaster always brings people together. We have turned out differently. If the CPS does not put pressure on the leadership of the Russian Orthodox Church, there would be no closure of churches at Easter, and, therefore, would have been without the current confrontation around Sredneuralskaya convent and its founder chiyoumen Sergius Romanov.

After Easter Russia could spend in “fighting conditions”, with maximum precautions, the May 9 Victory day Parade. Such a holiday would be the point of Assembly “forces of good”. Removal of the banner of the Soviet Union in the Parade — it is our right and we have to return it. To honor the Soviet people-the winner, who went into battle and in the shop, the partisans and the farm under the red flag — the bounden duty of posterity. It is our historical memory, in her heart — the blood of tens of millions of people. Is it possible to betray the heroes — the winners of fascism…

Virus crisis has opened a window of opportunity to regroup forces in the post-Soviet space. The Eurasian Union would not only preserve human health and the economy, but to revive the dream of mankind of a just society. Where from each according to his ability, and labor — it’s not robbing the neighbor, but the decoration of the planet and the application for a shared future.

Unfortunately, multi-core, efficient, responsive to the global agenda, and just consistently working the Eurasian Union is only a dream. And this despite the fact that today it unites 182 million people living in 14% of the world’s land. Huge material resource abundant in the spiritual field!

Why is this project of state building — slips? Steal a lot “builders” and “architects” by taking funds offshore, to personal villas and cottages? Lost skills and professionalism, no personnel able to take responsibility and to present a constructive result, not another failure? Prevent enemies, in the face of world dominat (the secret government), to whom humbly bow their necks irremovable managers? Or run large-scale integration project is only an imitation, a trick-the carrot for the unsuspecting citizens?

Difficult to answer unequivocally. One thing is clear: Russia is the largest country in the EurAsEC, and from its ruling class, political system, social well-being of the people depends largely on the success of the ambitious project.

Why are our achievements so modest?

The participants of the session of the Moscow economic forum the question was asked: “does the government of Russia the current crisis as an opportunity for growth?” The answers were distributed as follows: a) Yes, the government had no choice (14%); b) Yes, but not fully, less and slower than needed (30%); C) no, this government is not interested in changing the policy (56%).

Sergei Glazyev noted that all the answers in one way or another is correct. The government is working in the fire brigade, and it is keen to reverse the situation and achieve economic growth. But within budget to create new opportunities for the development of the unreal, and the government in the financial market is in the hands of currency speculators. “I must admit that the powerful circles that are manipulated by the Central Bank to be more influential than policies from above”, — said Sergei Glazyev.

On the other hand, “forces of evil”, serving the financial speculators, are not fatal-demonic (as is not it, and coronavirus). The Central Bank is an organ of the state power and regulation, and his leadership is approved by the state Duma. Is our Parliament and the ruling party like that every leap of the ruble down is 25-30 billion rubles of profit for financial speculators at the expense of the ruin of all the rest?! Or is it not?