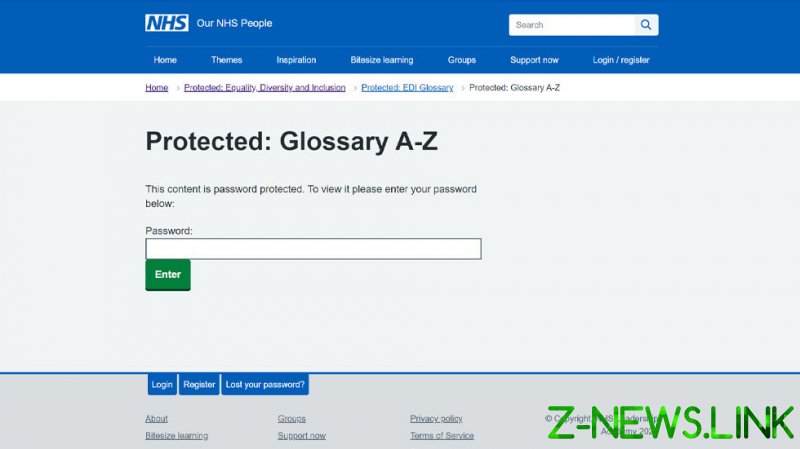 The draft document, titled ‘Glossary A-Z’, is hosted on the ‘Our NHS People’ website for staff. Before it was removed from public view over the weekend, the incomplete list was found to explore a range of ideas, from ‘cultural appropriation’ to ‘intersectionality’, ‘white fragility’ and even ‘woke’ itself.

Certain sections go beyond simple definitions of terms – moving into lengthy discussions of the nature of, for instance, ‘allyship’.

Defining an ‘ally’ as someone who “actively promotes and aspires to advance the culture of inclusion,” the glossary goes on to distinguish between “authentic vs performative” forms of ‘allyship’.

While deeming “authentic allyship” the result of a “lifelong process of building relationships based on trust, consistency, and accountability with marginalized individuals and/or groups of people,” the list notes the ‘performative’ variety as being “done out of self-interest” to “look good or more credible.”

Similarly, the document explicitly differentiates between misogyny – defined as the “hatred of” and “sexist behaviours towards” women – and ‘misogynoir’, a “newer term” coined to better describe “the specific hatred, dislike, distrust, and prejudice directed toward Black women.”

The glossary also includes alphabetically-organised sections on Black Lives Matter, colonialism, identity politics, ‘micro-aggression’, tokenism, ‘taking the knee’, with a host of subsections under such hot-button topics as ‘gender’ and ‘power’.

Under ‘G for gender’, the document – which holds gender to be “culturally determined” – goes on to explore concepts of ‘gender identity’, an “innate sense” of one’s gender that “may or may not correspond to the sex assigned at birth,” and ‘gender dysphoria’, which is “discomfort or distress” as a result of a “mismatch between their sex assigned at birth and their gender identity.”

In addition, the glossary explores various conceptualisations around ‘whiteness’, including “white saviourism,” “white supremacism,” “white centering” (the “conscious and unconscious belief that whiteness is the norm”), “white exceptionalism” (the belief that being “one of the good ones” means exemption from “anti-racist work”), “white fragility” (when “white people defend against and avoid acknowledging their own racism”) and “white privilege.”

On Twitter, Conservative MP for Harborough Neil O’Brien described the glossary as an “alphabet of woke” and criticised a number of the concepts it explores as being “highly divisive” and not to be “officially pushed like this” by the NHS.

“There’s a whole bunch of concepts in there: white fragility, or white supremacy – all these kind of different things that are extremely divisive concepts that should not be being pushed by HR managers in the NHS as a sort of gospel or something to that effect,” O’Brien told the Telegraph.

Sunder Katwala, director of the independent think tank British Future, which deals with topics of integration and immigration, pointed out that in addition to focusing on “contested terms” like ‘cultural appropriation’, the glossary had failed to list topics, like disability, which were more “central” to healthcare.

“This NHS equality & diversity glossary is weak. It is in much need of proper editing & oversight. It misses out on many important EDI themes. It uses ‘Bipoc’ which makes no sense in the UK context. Many definitions are weak & often partial on contested terms,” Katwala wrote as part of a series of tweets on the document.

A number of British publications have quoted an NHS spokesperson as saying, “This draft document is not NHS guidance, was not intended for publication and has been removed.”