Home / WORLD / Almost half of Biden’s subscribers on Twitter are bots, analysts claim

Almost half of Biden’s subscribers on Twitter are bots, analysts claim 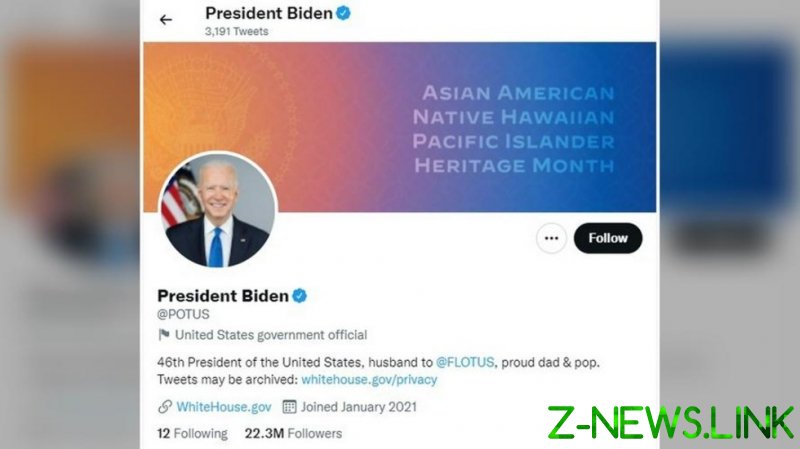 Almost half of the 22.3 million followers that President Joe Biden’s account on Twitter has are not real people, Newsweek reported on Tuesday citing analysis provided by a small software firm. The same measure was used by Elon Musk to pause his acquisition of the social media giant.

SparkToro, which operates a tool for telling “fake” accounts on Twitter from genuine ones, looked at the official @POTUS account and found that 49.3% of them were inauthentic. The screening process takes in several factors from activity data to profile pictures to make a judgment on whether there is a real person behind each account. The share of bots following Biden is higher than for most, the company said.

Last week, billionaire Elon Musk paused his $44-billion acquisition of the platform, claiming that the company was wrong when it stated that less than 5% of Twitter accounts were “spam/fake”. He claimed the actual percentage to be closer to 20 and said the buyout price he offered to shareholders was based on the company estimate, so an adjustment was in order.

He and Twitter CEO Parag Agrawal exchanged a series of tweets about the issue, with the executive touting Twitter’s efficiency in removing inauthentic accounts from the platform. Twitter suspends 500,000 fake accounts a day “usually before any of you even see them” and locks millions each week on suspicion of sending spam, he said.

The analytics firm said Musk appears to be right in his assessment, based on what they found checking a sample of some 44,000 active public Twitter accounts. They classified almost a fifth of them as fake.

The metric may vary significantly depending on whether dormant users are excluded from the sample. SparkToro also turned its attention to Musk’s followers and concluded that 23.42% of active accounts and 70.23% of all accounts subscribed to his posts were bots. Newsweek didn’t say whether the sample of Biden’s followers analyzed by the firm was filtered for activity.

In 2018, the firm made a similar study of the personal account of then-President Donald Trump, @realDonaldTrump. Of the 54 million followers he had at the time, 61% looked fake, SparkToro wrote. Trump has since been de-platformed by Twitter.