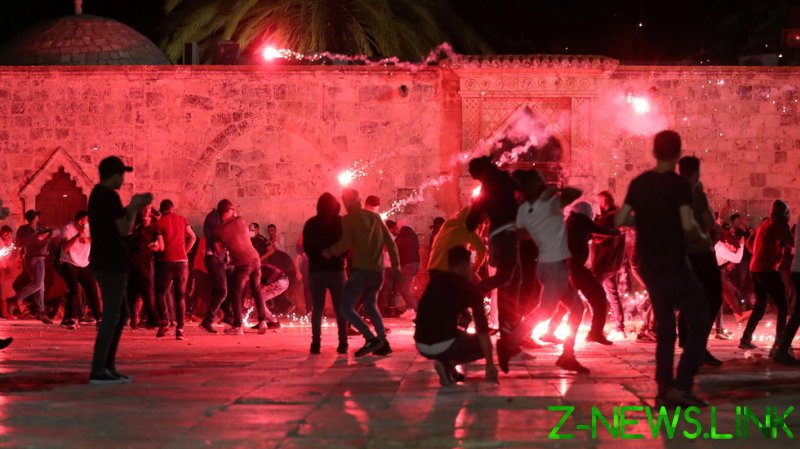 At least 178 Palestinians were injured in clashes with police across Jerusalem on Friday, including near the Al-Aqsa mosque, the Palestinian Red Crescent said. Some 88 people were hospitalized, and most affected people suffered injuries to their faces and eyes after being hit but rubber bullets and shrapnel from stun grenades.

Earlier, the Israeli media also reported that at least 12 police officers suffered injuries. Fierce scuffles broke out after the Israeli police deployed large forces to the Al-Aqsa mosque, where tens of thousands of Muslims gathered for the last Friday prayers of the holy month of Ramadan.

The worshippers started hurling chairs, rocks and shoes at the police that responded by using rubber bullets, tear gas and stun grenades. Footage published on the social media show crowds throwing what appears to be pieces of furniture and rocks at the officers in riot gear amid the thin plumes of what appears to be smoke or tear gas.

At some point, some of the protesters can be seen rushing at police and even jumping at the officers. A large group of worshippers also found itself trapped inside the mosque as a result of the clashes.

Clearing the media from the plateau, one Israeli officer threatened to break the camera of a Ruptly stringer, interrupting the live feed from the scene. Ruptly was back online several minutes later, however.

Israeli authorities also closed the Damascus Gate and cordoned off Jerusalem’s Old City to take the situation under control.

“The Israel Police will not surrender to any provocation and will continue to allow everyone, whoever they are, the freedom to demonstrate within the limits of the law. With this, we will continue to act uncompromisingly in cases where the law is breached,” the law enforcement said in a statement on Friday.

“We will not allow the disruption of order, any form of violence and attempts to harm officers while taking advantage of the freedom of religion,” said another statement, issued after the police regained control over the Temple Mount.

The plateau covers the ruins of the ancient Hebrew Temple, destroyed by Romans in 70 CE, and considered the holiest site in Judaism. The Mount is also sacred to Muslims, however, and is home to three mosques and four minarets.

The current unrest was triggered by a twist in a long legal battle between several Palestinian families and Israeli settlers that seek to displace them from the nearby Sheikh Jarrah neighborhood. Palestinian protesters and Israeli police have clashed in the area throughout Ramadan.

As an Israeli high court judge is considering whether to overrule the Palestinians’ eviction, France, Germany and the UK have called upon Tel Aviv to cease its settlement expansion in the occupied West Bank. The UN also warned Israel that its forced evictions in East Jerusalem might “amount to war crimes.”

Meanwhile, the unrest risks sparking a larger conflict between Israel and Palestinians. Leader of the Islamist militant group Hamas, Ismail Haniyeh, sent a direct message to the outgoing Israeli Prime Minister Benjamin Netanyahu, warning him against playing “with fire.”

“We will defend Jerusalem no matter what sacrifices we must make,” Haniyeh reportedly said, according to the Israeli media, which also reported several Palestinians waved the flags of Hamas near Al-Aqsa on Friday.

Leader of another militant group – Islamic Jihad – also said on Friday that “it is impossible to tolerate what is happening in Jerusalem and the enemy must expect our response at any moment.”

Palestinian Authority President Mahmoud Abbas has called for a UN Security Council session about the clashes in East Jerusalem, according to the Palestinian news agency WAFA.

Meanwhile, Qatar slammed the deployment of the Israeli security forces to the Temple Mount, which it called a “provocation” against millions of Muslims around the world.