Alleged Ukrainian shelling of apartment building to be investigated 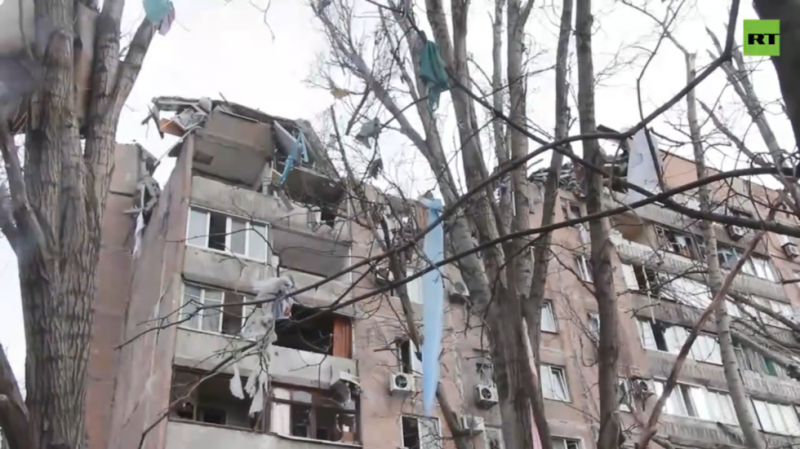 Russian authorities will investigate an incident in which a nine-storey apartment building in Donetsk was apparently destroyed by shells fired from Ukrainian-controlled territory.

The spokeswoman for the Investigative Committee Svetlana Petrenko said in a statement that explosives hit the building in the city’s Kirov area early Wednesday morning. As a result, the building’s structures were “partially destroyed,” with one person killed, and five people, including an 18-month-old and an 8-year-old, injured.

Head of Russia’s Investigative Committee Alexander Bastrykin has ordered a probe into what the agency considers to be “another example of criminal actions by the Ukrainian security forces against the civilian population.” This decision was made during a joint building inspection of Russian and local investigators.

Donetsk is the capital of the eponymous Donetsk People’s Republic, which Moscow recognised as independent, last month. The incident was first reported by the city’s Mayor Alexey Kulemzin.

“As a result of the morning shelling, a direct hit by a Ukrainian shell was recorded on the 9th floor of a residential building on the street … [it] partially destroyed the eigth floor of the first entrance, [and was] followed by fire,” he wrote on Telegram.

Local media published video footage of the emergency services’ work, including the apparent rescue of an injured one-and-a-half-year-old child.

Ukrainian authorities have not commented on the incident so far. Since the beginning of the Russian offensive on Ukraine, Moscow and Kiev have consistently accused each other’s military forces of targeting civilians.