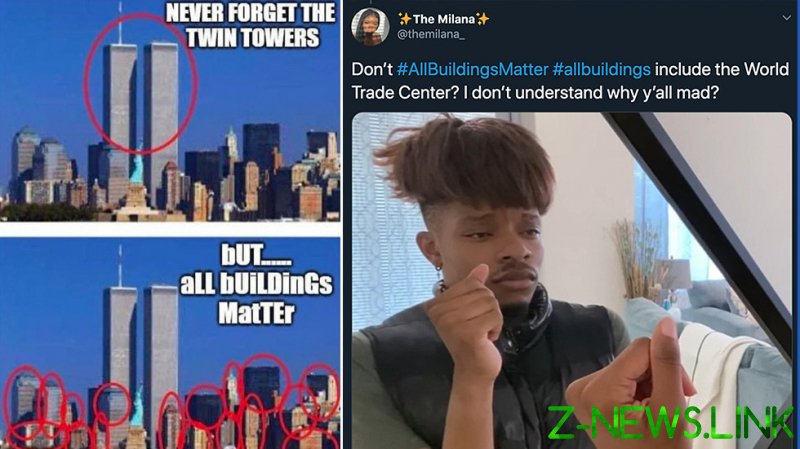 The three words in question made it to the top of US Twitter trends earlier on Friday, conspicuously overlapping with the 19th anniversary of the 2001 terrorist attacks in which nearly 3,000 perished.

The AllBuildingsMatter hashtag – an explicit evocation of the ongoing US debate – was used to ridicule flaws in the slogan ‘All Lives Matter’. Those trying to prove their point attempted to show, through the use of otherworldly memes, that saying “all lives matter” when talking about Black Lives Matter movement is similar to saying that all buildings – not just NYC’s Twin Towers – matter when discussing the 9/11 tragedy.

Those who proceeded with this logic weren’t shy about exercising their tongues and inserting the hashtag into their tweets.

The tone and message of the emerging online phenomenon – markedly invoking the twin World Trade Center towers that were razed to the ground in New York – touched a nerve in many Americans who began to flag the AllBuildingsMatter hashtag in their wrath-laded publications.

Those observing online – among them Errol Webber, a Republican candidate for Congress – were stunned by the fact that the hashtag trended particularly well, despite appearing in “only” 4,400 posts.

Many unloaded on those who utilized the hashtag to instill their views on others. “Using an event that took the lives of almost 3,000 people for your political agenda? That’s just f**ked up. I’d say that about anyone or any movement doing this,” a fiery response read.Others uploaded images showing the aftermath of the September 11 attacks to remind people “what you are mocking.”

“Being hateful does not bring more awareness or prove your point,” one wrote, without naming names.

Those in the pro-Black Lives Matter (BLM) camp stepped into the debate to make their point, but these interventions only made things more heated and polarized.

Unsurprisingly, much of the public anger was then directed towards unspecified “leftists” and BLM activists who ostensibly benefited from moving the AllBuildingsMatter hashtag up Twitter’s trending topics.

“African Americans died and lived in the area during 9/11. This hashtag is dumb and disrespectful,” a BLM critic pointed out. Some devout conservatives went as far as to accuse“the radical left” of “hating America.”

Pessimists suggested that nothing would bring the US together.

While outrageous to many, the “all buildings matter” phrase is not entirely new to the internet. T-shirts bearing the phrase have been readily available online for years, as have baseball caps and other merch. Four years ago, stand-up comedian Michael Che ridiculed it on a Netflix comedy segment.

READ MORE: Black Lives Matter is a noble cause, but harassment, coercion and bullying won’t advance it – it’ll just make the ‘brand’ toxic

Meanwhile, in New York the annual vigil for the victims of the worst terrorist attack in US history is being held at the 9/11 Memorial and Museum. The institution had to balance tradition and the safety of those attending during the Covid-19 pandemic. Reading of the victims’ names will be pre-recorded, no stages have been assembled. Instead, crews in face masks have installed hand sanitizer stations all across the venue.