Home / policy / All who are stronger than Ukraine, Russia is not too tough 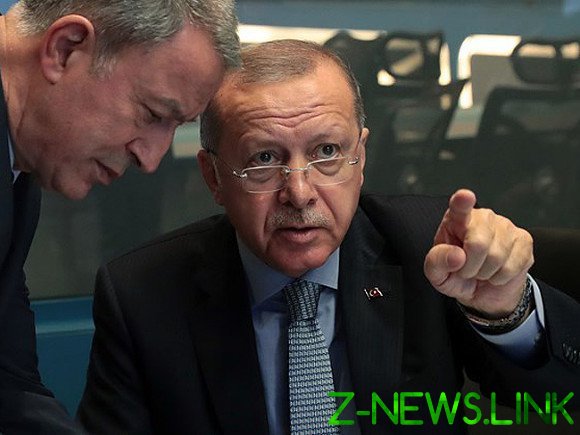 Experts of the political club “Rosbalt” believe that Erdogan too need Moscow to have a serious fight with him over Idlib.

According to Turkish sources, the soldiers of the army of President Bashar al-Assad, who died in recent days in the Syrian province of Idlib, in hundreds of people. The clashes have killed 14 Turkish military. However, the intensity of confrontation between Turkish and Syrian armies is not reduced. Turkey over the last few days has moved further into Northern Syria about a thousand tanks, other armored vehicles and thousands of their troops.

Our eyes in Idlib unfold more and more widespread fighting between Turkish and Syrian armies. The latter began in this province is quite wide offensive. In this behind Bashar al-Assad are Iran and Russia.

Meanwhile, Moscow and Ankara are all the time in a constant dialogue that is called “live wire”, including at the highest level. The presidents of Russia and Turkey Vladimir Putin and Recep Tayyip Erdogan has twice in recent days discussed by telephone the situation in Idlib, however, judging by the meager records of those negotiations, their position today is the opposite. Erdogan and his foreign Minister Mevlut Cavusoglu, in the form of an ultimatum demand to withdraw formations of the army of Assad in position, agreed at negotiations between Putin and Erdogan in Sochi in September 2018. Moscow is tersely repeats the words about the need to finish off the terrorists entrenched in the “zone of de-escalation” in Idlib province.

The situation is currently deadlocked. However, Erdogan appears ready to cut this Gordian knot, acting by force. “Openly declare that at the slightest damage to the Turkish military, the Turkish armed forces will be everywhere to strike at the forces of the regime of Bashar al-Assad,” — said the Turkish President.

Experts gathered Thursday at the next session of political club “Rosbalt” in the Moscow press center of news Agency, discussed the possible ways out of the current situation in Idlib and tried to answer the main question: whether this will result increasing the Russo-Turkish confrontation in Syria in full-scale war, or the main parties to the current conflict — Moscow and Ankara manages to agree on certain conditions?

Chief researcher, Institute of Europe RAS, head of the Centre Europe-middle East RAS Institute of Europe Alexander Shumilin stated that Erdogan “massively enters its troops to Syria in order to expel the army of al-Assad, from Idlib over the lines that defined the Sochi agreements.” In this regard, the expert believes that “we must prepare for major combat operations because KOs (Assad’s army) found at the stone (Turkish army)”.

In his opinion, “Russia in this situation were in a very bad and uncomfortable situation, because to deny Assad the correctness of his attitudes and actions it is not solved, at the political level supports it offensive”.

“Discomfort” of the Russian position on Syria, according to Shumilina, now is that for several years the main economic and political partner for Moscow here was Ankara, not Damascus. In strategic terms, Turkey is important for the Kremlin “in regard to “undermining the unity of NATO on the southern flank”. This strategic partnership in the political sphere and is also underpinned by the economic interest of Russia in cooperation with Turkey.

See also:  The EU signed an agreement on visa-free regime for Ukraine

“Turkish stream” is the direction of Russian gas exports to Europe, which is becoming increasingly important, especially against the background of what is happening around Nord stream 1 and 2″, — said the expert. Thus, he continued, “Erdogan (for Russia) — the main thing, and Assad is secondary, but to the Kremlin to donate can’t, and solve the problem with Idlib is also necessary”.

At the same time, said Shumilin, “al-Assad has put the Kremlin in a deadlock that needs to be solved only by diplomatic means.” Meanwhile in Syria, he says, “can occur stimulated collision of Russia with such serious opponents as Turkey and the United States.” A clash of Russia with the United States in Syria today is becoming less likely, but “with Turkey tensions are rising, and the only personal contact Putin and Erdogan can to minimize it”, — the expert believes.

Arabist, doctor of historical Sciences Elena Galkina reminded that any agreements reached, in particular, in Astana between Russia, Turkey and Iran are not forced Assad to withdraw from previously occupied positions. At the same time, “Turkey to a certain point all arranged now, however, it is important to save face and show the people who fought in this war on the side of the moderate opposition that they can count on it”, — said the expert. According to Galkina, “if Russia and other participants of this conflict would not attack on the vital interests of Turkey, then they will always be able to negotiate.”

The expert believes that there are many similarities in the behavior of Russia in Syria and the Donbass. In the first case, says Galkina, from Moscow it is about the recovery status of the great and the second a regional power. In both cases Moscow in words acts as a mediator between the conflicting parties. At the same time, the expert noted that Russia’s actions in Syria contradict each other. “On the one hand, the desire to restore the Imperial grandeur, which the Kremlin does not think without the military bases abroad, in particular, the Tartus base and Hamim in Syria, and on the other, the loss of credibility as a mediator in international Affairs,” — said Galkin.

At the same time, says the historian, the interest of Moscow in large economic projects with Turkey, coupled with the desire to tear her away from NATO, lead to the fact that the great war between Russia and Turkey today is unlikely.

An expert on the Middle East Mikhail Magid also noted the ambiguous position of Moscow in this story. “On the one hand, for Russia it is extremely important partnership with Turkey — and as a way to economic integration with it, and as a way to drive a wedge between NATO members, and on the other, since Russia acts in Syria as a partner of Iran and on the side of the Assad regime, de facto confronted with Turkey, to be pure mediation is not for her,” he says.

Despite this, Magid stated that Russia today is “avoiding to engage in conflict with someone stronger Ukraine.” As an illustration of this statement he cited three cases that occurred in the course of the Syrian war, when the Kremlin refused to armed response to the actions of other major powers in your address or the address of Pro-Kremlin forces: the destruction of a Turkish fighter jet in 2015, the Russian su-24 over the Turkish-Syrian border, the defeat of the American aircraft and artillery columns of the Syrians, and Wagnerova under the Deir ez-SORM February 7-8 2018, as well as an incident of the same year, when Syrian air defenses shot down a Russian reconnaissance aircraft Il-20M, as stated in the defense Ministry, by the Israeli fighter. In all these cases, the Kremlin refused a military response, said Magid.

Other participants of the political club noted that Moscow does not want to engage in serious military conflict and with extremely increased in recent years in the military in the Ukraine.

“Russia’s military conflict with such a powerful country as Turkey is a very dangerous idea that could lead to new Tsushima (referring to the defeat of the Russian fleet during the war with Japan in 1905, — “Rosbalt“). Realizing this, Moscow will by all means to avoid such conflict and to make every effort to “correct” him with Erdogan. In turn, the Turkish President will also try to avoid war with a nuclear power,” says Magid. In his opinion, the current Russian-Turkish contradictions can be solved by a third party, which may be living in the North of Syria the Kurds.

In addition, the political club, it was noted that such a “third party”, by which Moscow and Ankara can try to resolve this conflict can become the President of Syria Bashar Assad, which in this case will have to accept the inevitability of the loss of part of its territory occupied today by Turkey.

However, during the discussion it was noted that the uncertainty in Northern Syria is still very large. Erdogan is being driven forward its military and the voters that support the operation of the Turkish army in Idlib, and Putin, in turn, presses the part of the Russian military, unhappy too, according to them, the passive tactics of Russia in this conflict.