Home / WORLD / ‘All the statues were Democrats,’ Rep. McCarthy says as 67 Republicans join Dems in vote to pull Confederate busts from Capitol

‘All the statues were Democrats,’ Rep. McCarthy says as 67 Republicans join Dems in vote to pull Confederate busts from Capitol 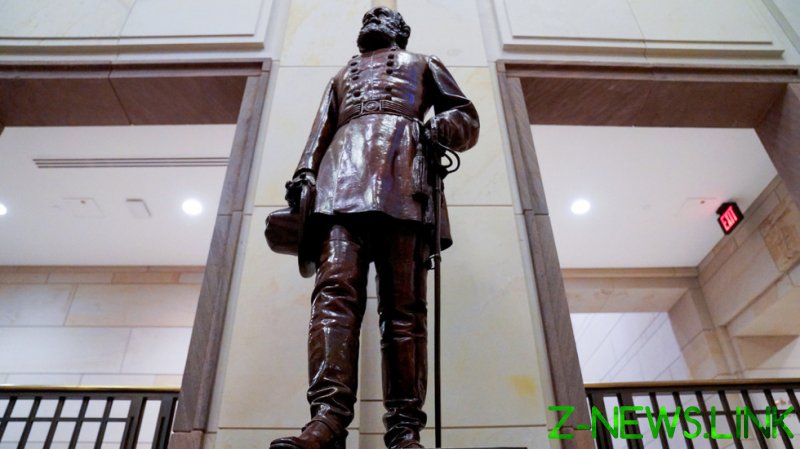 The bill passed the House in a 285-120 vote on Tuesday, with all Democrats supporting the legislation alongside 67 Republicans. Expected to be signed by President Joe Biden if it secures approval in the upper chamber, the law would see all statues of Confederate leaders pulled from the US Capitol, including a bust of Chief Supreme Court Justice Robert Taney, who penned the notorious Dred Scott decision, ruling that black Americans did not qualify for citizenship.

Though the bill was greenlit in Congress last year, passing with even more GOP support at the time, it was later blocked by a Republican-controlled Senate. But with a Democratic majority in both chambers this time around, the measure will need support from only 10 Senate Republicans to move on to Biden’s desk.

House Minority Leader Kevin McCarthy (R-California) backed the legislation, but nonetheless hit out at Democrats during floor debate on Tuesday, claiming that every statue slated for removal portrayed a member of their own party – which once harbored pro-slavery and later segregationist politicians.

Wisconsin Republican Glenn Grothman said he voted against the bill because it would replace Taney’s statue with a bust of Thurgood Marshall, the first black Supreme Court justice, who voted in favor of the landmark Roe v. Wade decision that made abortion legal.

“I will always look at him as… the guy who kind of put the foot on the gas and legalized late term abortion,” Grothman said in explaining his vote.

The bill’s primary sponsor, House Majority Leader Steny Hoyer (D-Maryland), defended the legislation at length during a floor speech, saying Justice Taney “represents the worst of American injustice and racism” and that Marshall stood for “the best of American justice and equality.”

In comments to reporters ahead of the vote, Hoyer said the Senate would likely take up the bill soon after it passed the House.

Fellow Maryland Democrat Jamie Raskin also criticized Taney’s legacy, observing that the justice’s own hometown of Frederick, Maryland had already uprooted a statue in his honor five years ago.

If signed into law, the legislation would change the rules governing what types of statues can be displayed at the Capitol, directing the building’s official architect to identify any busts representing Confederate officials. The body that oversees the Library of Congress would then be tasked with removing them.

Every US state is permitted to contribute two statues to the National Statuary Hall in the Capitol, typically selecting historical figures ranging from Revolutionary War heroes to disability rights activist Hellen Keller. However, the hall still hosts 11 Confederate statues, though some are already in the process of being removed at the request of their donor states.

Confederate memorials have become a major flashpoint in the American culture war, with critics seeing them as a celebration of those who fought to preserve slavery, while proponents argue they are inseparable from the history and heritage of the South. Dozens of Confederate statues across the country were vandalized last year amid a wave of heated protests over the police killing of George Floyd, in addition to many removed by local officials. While nearly 800 memorials stood in the US at the beginning of 2020, that figure shrunk to around 700 by the end of the year, according to the Southern Poverty Law Center.