Home / WORLD / All the pressure is on Petr Yan, Islam Makhachev and Khamzat Chimaev at UFC 267 – convincing wins must be the order of the night

All the pressure is on Petr Yan, Islam Makhachev and Khamzat Chimaev at UFC 267 – convincing wins must be the order of the night 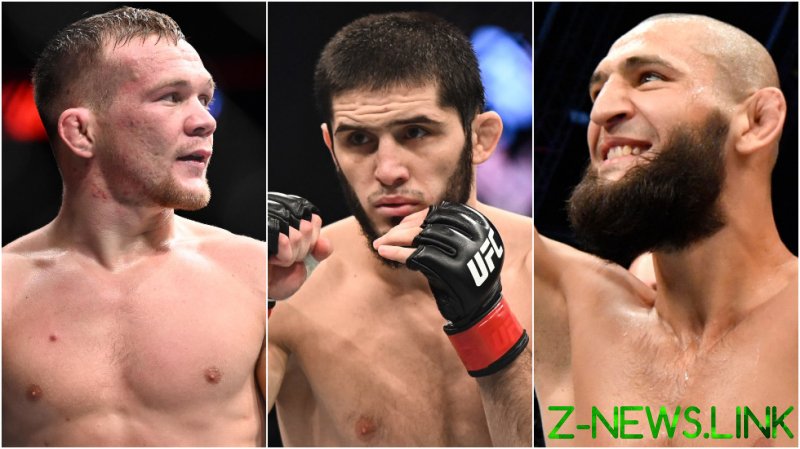 The lot of an MMA fighter entering a contest as a heavy favorite is not necessarily an enviable one. Cliched analysis would call out complacency as the greatest danger when the expectation based on apparent ability is victory, while the reality is more nuanced than that.

The manner of victory is also important in these situations – and Petr Yan, Islam Makhachev and Khamzat Chimaev face opponents whose motivation has been topped up without the slightest of need for words from their teams ahead of Saturday’s action on Fight Island.

Makhachev is unbeaten in more than six years. In the parlance of further cliches, Hooker has nothing to lose. It is both a position the Dagestani has had to familiarize himself with and a situation that the 30-year-old cannot afford to even subconsciously take lightly, with Hooker setting himself as party-thwarter.

Petr Yan remains in a faintly ridiculous state of limbo. The bantamweight was beating Aljamain Sterling when a rash knee saw him disqualified for an illegal shot in March, and the summit of the division has been in a strange state of inertia ever since, with Sterling requiring surgery and engaging in online spats with Yan while some claim that the American may never return to action.

Yan must suspect that he will never have the chance to avenge his nominal defeat to Sterling, so his meeting with Cory Sandhagen ostensibly represents an opportuniy to let off some steam more than seven months since that hugely controversial first defeat of his career.

All of which represents a significant incentive for Sandhagen, who is more than a ‘live’ opponent and is highly capable of giving Yan trouble with his timing and experience.

Sandhagen’s steadfast posture when Yan moved his head towards him during their face-off could be construed as admirable evidence of his innate confidence ahead of their clash. Yan will be in a certain amount of exile should he suffer an upset, perhaps doomed to be defined by that strange setback that was the result of his misdemeanor against Sterling.

The predicament he faces encapsulates the aim of all three favored fighters: victory, as always, is paramount, but convincing performances make matters incalculably sweeter and of greater value when title reckonings are afoot.