Home / WORLD / ‘All the blame is with the goalkeeper’: ‘Poetic’ comedy goal scored in first ever Spanish third flight game goes viral (VIDEO)

‘All the blame is with the goalkeeper’: ‘Poetic’ comedy goal scored in first ever Spanish third flight game goes viral (VIDEO) 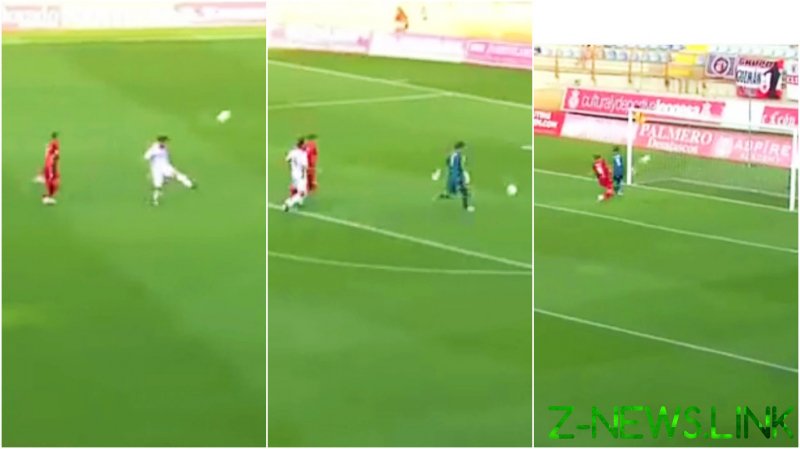 The game pitted Cultural Leonesa – who memorably reached the last 16 of the Copa Del Rey in 2018, in which they were knocked out 5-2 on aggregate by Barcelona – against Rayo Majadahonda.

For hosts Leonesa, though – based in the north-west of the country, two hours from the Portuguese border – it was a match to forget from 24 minutes onwards.

At that point in the proceedings, a long ball was cleared out of Rayo’s box towards a lone striker, Ruben Sanchez, being marked by just one defender.

Struggling to deal with the area knock, the man at the back can be seen comically lobbing his own goalkeeper, who then sprints back towards the box.

Ridiculously missing a clearance, his second attempt is blocked and smashed home by Sanchez to make it 1-0.

Juan Jose Sanchez Romero scored a second 50 minutes later to ensure the visitors went home with the points – and the clip of the first goal went viral.

While The Athletic’s Spanish football expert said there was “something poetic about the first ever goal in Spain’s newly designed third tier”, others were less kind.

“They do this in women’s football and we laugh for a month,” one viewer pointed out, referencing how men’s football is considered by some as streets ahead in quality.

“All the blame is with the goalkeeper,” began an in-depth analysis.

“Not for missing the shot, no. For not knowing the rules.

“The ball clearly comes from a poor clearance. There was no intention of his teammate to give him the ball – therefore he could have taken it with his hands.”