All that race-baiting for nothing? Poll shows most black Britons don’t share BLM’s passion for toppling statues & attacking cops 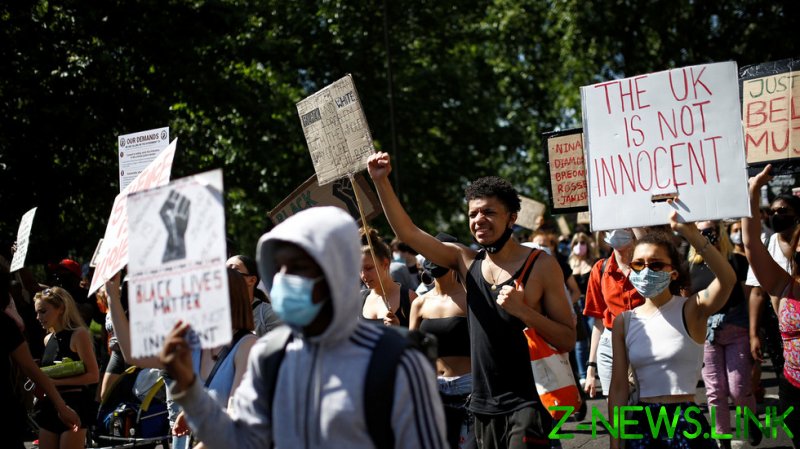 As the trembling woke jellies of the liberal establishment continue to wring their hands over those problematic statues in our parks and town centres, a new report has polled what Britain’s black community think on this issue and the results will shock some.

Tearing down tributes to historical figures, brawling with the police and dismantling capitalism? It turns out these are not the popular ideas some would have us believe.

Which should be a surprise. Because self-appointed social media commentators, columnists in the liberal press and the noisy throng pushing an unfiltered Black Lives Matter agenda have been insisting for a year now that Britain is in thrall to a racist, colonialist, imperialist past and anything that even whiffs of this must be torn down and destroyed or shamefully hidden in the basements of our museums never to see the light of day again.

But a report by the Henry Jackson Society, entitled BLM: A Voice for all Black Britons? found a clear majority of Britain’s black community find the whole idea of statue toppling and other BLM goals at odds with how they actually feel.

The think tank found that only one in six black Britons believe tearing down a statue is a legitimate form of protest, according to polling conducted for its report. As for the BLM’s other stated goals of dismantling “imperialism, capitalism, white supremacy, patriarchy and the state structures that disproportionately harm black people in Britain,” well, they have a similar level of support among the black community (25 percent) as they do among the wider population (23 percent).

The question, therefore, has to be asked: With more than three quarters of the country holding an opposite view to what underpins their student-level politics and obsessive victimhood, who or what does BLM represent?

Like so many hard-left organisations, BLM wants to be everything to everyone and in doing so has lost sight of the people and the cause that it first claimed to champion. Just check out their website if you want proof.

Riding in the slipstream of the powerful US pioneers of BLM, who had serious and legitimate causes for concern over racism brought to a boil with the death of George Floyd, the UK offshoot managed to stir up public sentiment towards the police but nowhere near the extent that it managed to raise the mob against statues.

The sight of white men rolling a bronze likeness of a long-dead Edward Colston along the street to be dumped in Bristol harbour was as ridiculous as it was puzzling. What did this have to do with BLM?

The Henry Jackson poll seems to show that the majority of Britain’s black community were not okay with trashing history and promoting cancel culture. Quite the reverse, in fact. And when it came to using violence against the police, even less support was evident, at just five percent.

While it remains difficult to pin down who exactly is in charge of BLM in the UK or what they actually do, there were rumblings of activity last week as a slew of disparate groups were announced as beneficiaries as the organisation distributed half the £1.2 million in donations it received from its crowdfunding site last year.

Among recipients there was cash for police monitoring services, a domestic violence organisation, an outfit that deals with LGBTQI refugees and asylum seekers, and a charity that helps those affected by cancer, long-term health conditions and Covid-19.

All worthy causes, no doubt, but I find it hard to believe that these are the intended beneficiaries that people were donating their hard-earned cash towards last summer. Most donors at that time would have imagined their money going to the families of young black men who had died at the hands of white policemen. In Britain.

The problem with that belief is that while these cases do exist, they are not that common. Our law enforcement system is a long way from perfect but it is streets ahead of what they have in the USA, largely because the police here are mainly unarmed which drastically reduces the tension during arrest or even stop and search. Add a gun to the mix and a life can be taken in an instant.

In the absence of victims from police brutality, BLM has spread its charity far and wide even beyond the shores of Great Britain, to a Spanish labour union and a South African shack dwellers’ movement. All things to everyone.

This should wake up the woke institutions like the National Trust and the British Museum, who swallowed the BLM agenda hook, line and sinker, and couldn’t shutter historical landmarks or cart off colonial artefacts to Big Yellow Storage quick enough lest the culture police start banging on the door.

The Department of Culture, Media and Sport (DCMS) has told them to lift their game and ensure they continue to give a rounded view of Britain’s history instead of, as one minister put it, bowing to the wishes of “town hall militants and woke worthies.”

Now, thanks to this timely intervention from the DCMS and the Henry Jackson Society report, there may be a reset on the toxic and divisive public conversation that has preoccupied many over the last year and we can leave those statues of Winston Churchill, Francis Drake and Horatio Nelson in situ.

After all, as most people agree, they are fine just where they are.