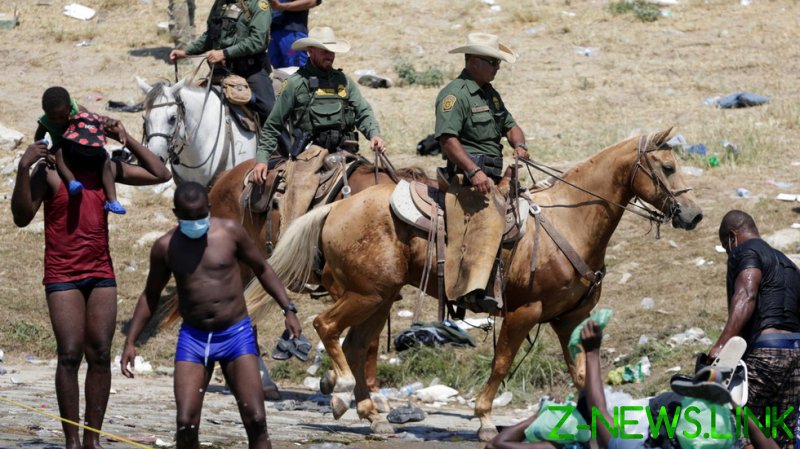 The only change that was made after the US Department of Homeland Security suspended use of horse-mounted patrols last week was that the equestrian unit stopped working on the banks of the Rio Grande River near Del Rio, Texas, the Washington Examiner reported on Friday, citing an unidentified Border Patrol official.

“No horse patrol in any sector has been disbanded,” the official was quoted as saying. “They’re still alive and well in Del Rio, just working non-river areas.”

The unit was villainized by Democrat politicians and mainstream media outlets after photos surfaced in September of Border Patrol agents on horseback trying to block Haitian migrants from crossing into the US. The agents were falsely accused of using “whips” to “corral” the migrants, and some leading Democrats, such as Vice President Kamala Harris, likened the alleged brutality to “times of slavery.”

President Joe Biden condemned the horseback unit, saying migrants were “being strapped” and “those people will pay.” White House Press Secretary Jen Psaki last week touted the suspension of horse-mounted patrols in Del Rio as an example of actions the administration was taking in response to the “horrible and horrific” photos.

Border-security advocates have argued that the administration’s investigation into the agents involved in the incident won’t possibly be fair, because people at the highest levels of the government, including Biden himself, have already pronounced the officers guilty of heinous actions.

The Border Patrol’s horse-mounted operations have been instrumental in apprehending large groups of illegal aliens and intercepting drug cargoes. According to US Customs and Border Protection (CBP), the federal agency that oversees the Border Patrol, equestrian teams extend enforcement capabilities.

“The horse patrol are the most viable and, in some cases, the only option for the US Border Patrol to enter into regions inaccessible by any other means of patrol, such as 4X4 vehicles or all-terrain vehicles,” the CBP website says. “Without the horse patrol, these areas would remain unpatrolled and susceptible to transnational criminal activity.”