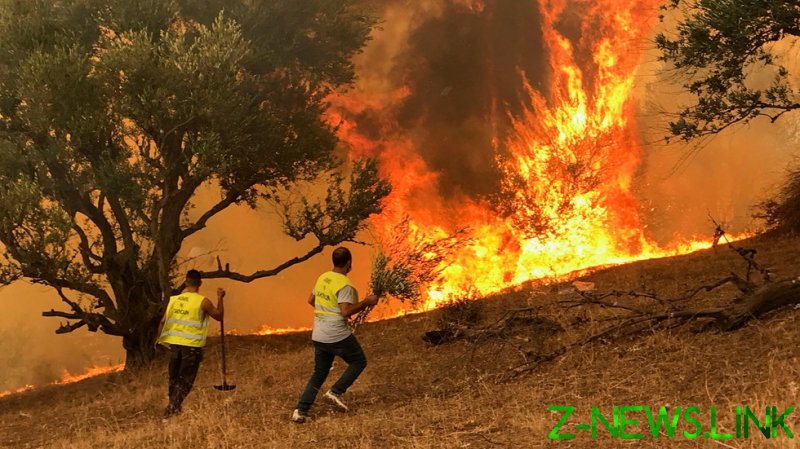 President Abdelmadjid Tebboune announced the arrests on Thursday during a televised address, saying that “justice will perform its duty” after some 50 separate fires erupted simultaneously earlier this week, most near Tizi Ouzou east of the Alergian capital.

“Some fires have been caused by high temperatures, but criminal hands were behind most of them,” the president said. “We have arrested 22 suspects, including 11 in Tizi Ouzou.”

Among the 65 killed since Monday are at least 28 Algerian soldiers, who were deployed alongside firefighters to contain the inferno, according to Reuters. Six military helicopters are also in use, supported by two firefighting planes leased out from the European Union. Tebboune said additional aircraft would be sent from Spain and Switzerland in the coming days.

Nearly 1,000 civil defense workers have been mobilized for the firefighting effort, Algeria’s Ennahar TV station reported, also noting that another 12 soldiers remain in critical condition after responding to the blazes.

While the president said the government “mobilized all the means of the military, the Civil Protection [and] forests’ services,” he lamented that those measures have been “insufficient given the multitude of fires.”

The region most affected has seen a serious heatwave this week, with Ennahar reporting temperatures in excess of 118 Fahrenheit (48 C) in recent days, likely playing a role in the intensity of the wildfires.

Algeria’s Interior Minister Kamel Beldjoud previously suggested that “criminal hands” ignited the fires. He did not elaborate on what proof the government had at the time, though Tebboune said authorities now have “formal evidence” during his address.

On Wednesday, a man who reportedly traveled to Tizi Ouzou to help the relief effort was killed by an angry mob after he was accused of taking part in the arson. Prior to his death, the man was arrested and taken into police custody allegedly for his own safety, but this did not stop the crowd from attacking him. Harrowing photos have circulated online purporting to show the man’s body after he was beaten to death and burned, stoking public calls to punish his killers. While Algeria’s Ministry of Justice opened a probe into the man’s death, it’s unclear if any arrests have been made.

Declaring a three-day period of mourning for the fire victims on Thursday as first responders continue to beat back the conflagration, Tebboune called on Algerians to “preserve national unity” while praising other provinces for sending in aid convoys.