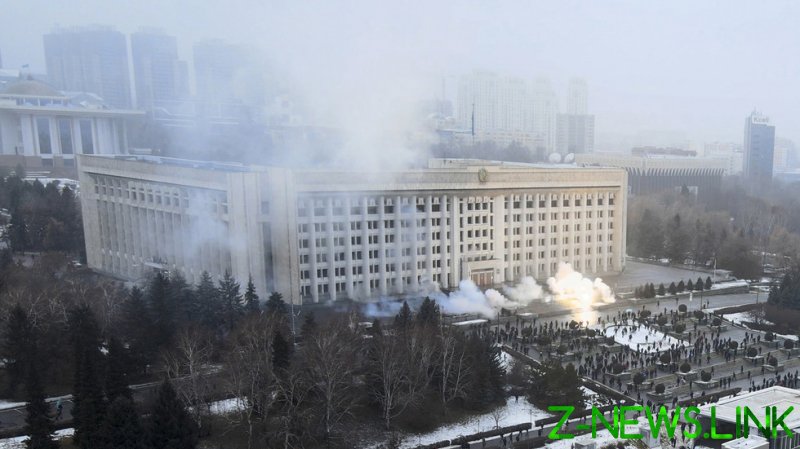 The situation in Kazakhstan took a sharp turn for the worse on Wednesday, as several cities saw violent unrest, with administrative buildings stormed, a presidential residence set on fire, and the main airport allegedly seized.

The protests began after a twofold hike in the price of liquefied petroleum gas (LPG) at the start of the new year. The price caps that had existed in the country for years had turned LPG into an extremely popular type of fuel, widely utilized both in households and in road vehicles, where it was commonly converted to be used instead of conventional gasoline.

In a matter of days, the unrest spread across the nation, growing increasingly political and violent.

A state of emergency and a curfew were declared on Wednesday, first in certain regions and then countrywide. Earlier in the day, President Kassym-Jomart Tokayev accepted his government’s resignation in the wake of the protests, appointing Deputy Prime Minister Alikhan Smailov as interim prime minister until a new cabinet is formed.

Despite the measures, street violence has continued across multiple Kazakh cities. The situation has become especially chaotic in Almaty, with groups of violent protesters storming local administration and other government buildings and setting them on fire.Footage circulating online shows that law enforcement agents appear unable to bring the situation under control, with multiple police and emergency services vehicles having themselves been torched. Demonstrators have been seen chasing and beating police officers and soldiers, with some apparently having had their firearms removed.

President Tokayev addressed the nation in a televised speech, blaming the ongoing violence on “financially motivated plotters” and highly organized “bandit elements.” In response, he also escalated his powers, deposing former president Nursultan Nazarbayev from his lifetime post as formal head of the Security Council and assuming the role himself.

“As the head of state and, from now on, as the chief of the Security Council, I intend to act as tough as possible,” he warned.

The old presidential palace, located in Almaty, has not been spared during the unrest. The crowd has breached its perimeter, setting the building ablaze. While the facility has not been used by the head-of-state for years, since the capital was moved from Almaty to Nur-Sultan (formerly known as Astana), it maintains its status.

Late on Wednesday, protesters reportedly breached and took over Almaty International Airport, the state’s major passenger and cargo hub, local media reported. Its representative said in a statement to the Telegram news channel Orda.kz that some “45 invaders” had assumed control after the military officers guarding its perimeter had reportedly left their posts. All passengers have been evacuated, they said, and flights to Almaty have been canceled or diverted by multiple airlines across the world.

Moscow broke its silence on the situation in the former Soviet republic on Wednesday, with the Foreign Ministry urging all parties to show restraint and seek a peaceful solution to the crisis.

“We hope for the swiftest possible normalization of the situation in the country, which is tied to Russia by a strategic partnership and alliance [and by] fraternal and human contacts,” it said in a statement, maintaining that the crisis was Kazakhstan’s internal business and no foreign parties should get involved.