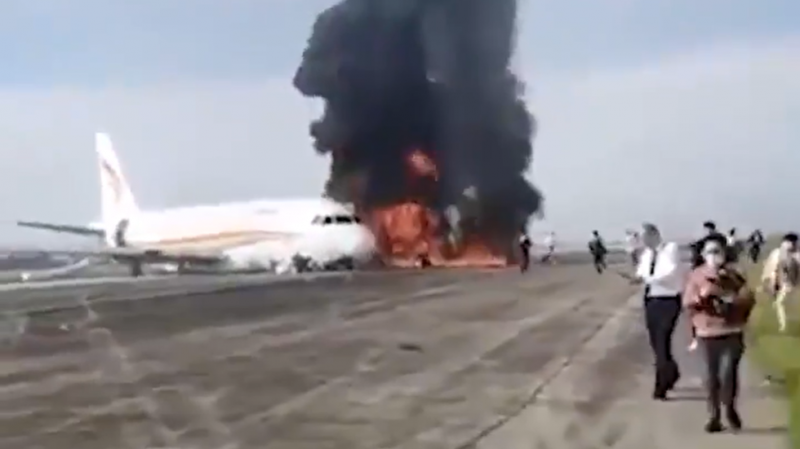 A passenger plane caught fire as it took off from an airport in southwestern China, with local officials stating one of its engines scraped the runway before bursting into flames.

A flight departing Chongqing Airport for the city of Nyingchi on Thursday morning encountered an “abnormality” and veered off the runway, igniting one engine after briefly colliding with the tarmac.

“There was an abnormality during the takeoff process and the takeoff was interrupted according to procedure. After deviating from the runway, the engine swiped the ground and caught fire,” local aviation officials said in a statement, noting that it “has now been extinguished.”

All 122 people on board – including 113 passengers and nine flight crew – were safely evacuated, Tibet Airlines said, though around 40 were taken to the hospital for treatment for minor injuries.

The incident was captured in videos shared by local media outlets, one showing a large column of dark smoke billowing toward the sky as first responders attempt to extinguish the blaze.

The airport said the left side of the craft, Airbus SE A319, caught fire, and added that an investigation is now underway. The aircraft was nine years old, Reuters reported, citing a website that collects aviation data. Airbus said it is aware of the incident and was still reviewing the situation.

Thursday’s runway incident comes less than two months after a deadly crash involving a Boeing 737-800 operated by China Eastern Airlines, which killed all 132 passengers and crew on board during a flight from Kunming to Guangzhou on March 21. Chinese aviation authorities say the plane’s black boxes were “severely damaged” in the crash, complicating the probe into the accident.