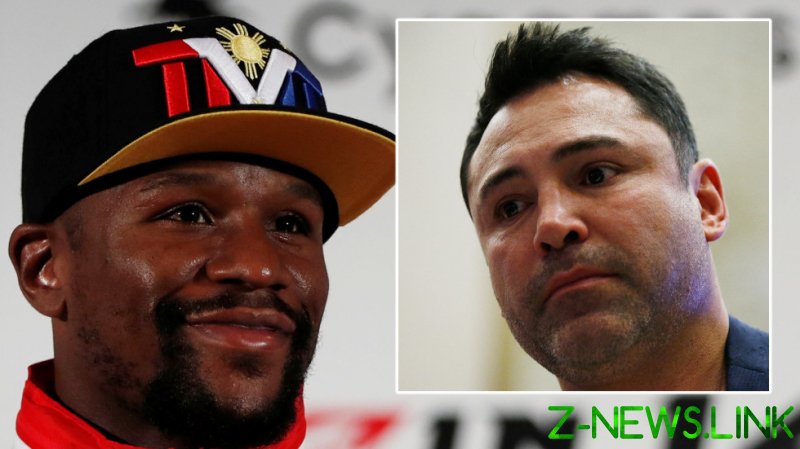 De La Hoya is poised to become the latest veteran boxer to make a return to the ring when he takes on former UFC fighter Vitor Belfort later this year, after announcing plans to take on two boxing matches before challenging old rival Mayweather in what would be a rematch of their 2007 match which Mayweather won by split decision.

It takes two to tango, however, and Ellerbe claims that Mayweather has zero interest in renewing his rivalry with De La Hoya – for the simple reason that he doesn’t want to help him pad his bank account.

“Let me kill this crap before some of the media run with the nonsense,” he wrote.

“Ain’t happening under no circumstances. He know damn well Floyd would never ever allow him to make a penny off of him. If he has a fighter that wants to make a fight against one of ours, now that’s different!“

Mayweather and De La Hoya are considered by most, if not all, to be the two premier boxers of their generation. De La Hoya was the top ranked pound-for-pound boxer in 1997 and 1998 and was the undisputed pay-per-view king of professional boxing until he was eventually eclipsed by both Mayweather and Manny Pacquiao.

“I want to make the biggest comeback in boxing history,” De La Hoya said of his comeback. “I want to get two of these fights down under my belt, and get the timing ready and everything, and then my third one, I want to call out Floyd Mayweather.

“I think Floyd after that exhibition he did with with Logan (Paul), I think Floyd has – I think he’s feeling like he has to prove something once again inside the boxing ring.

“So look, if I come out OK, my body feels great — I’m telling you, may jab feels faster than ever. I think it’s the 15 years I didn’t use it. If I feel good these next two fights that I have, I’m going to call out Floyd.“

But it seems that no matter how good – or bad, for that matter – the ring legend looks in his September 11 comeback against Belfort, any post-fight callout aimed in Floyd Mayweather’s direction will be met by deaf ears.