Aim low: US Air Force to allow WALKING instead of running in physical fitness tests 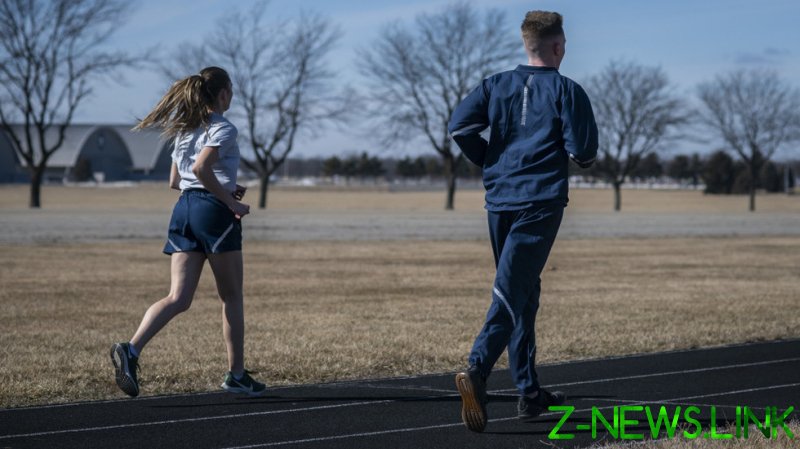 Contrary to the USAF slogan of “aim high,” the new test would allow airmen to walk or do shuttle-run sprints instead of the running portion of the PT test, planks or sit-ups for core strength, or raised-hand push-ups for the final part.

This is what Lieutenant-General Brian Kelly, deputy chief of staff for manpower, personnel and services at USAF headquarters told Chief Master Sergeant of the Air Force JoAnne Bass during a Facebook live chat on Monday. The service intends to start experimenting with the new test in January 2022.

In all fairness, the “choose your own adventure” description wasn’t actually used by Kelly, but by Task and Purpose, a private news site that specializes in military reporting. It’s a reference to a series of 1980s US children’s books. But if the shoe fits…

One might say, what’s the big deal? It’s not as if someone needs to be in peak physical shape to fly drones, or the disaster that is the problem-riddled F-35 stealth fighter. In fact, weighing more than 165 pounds (75 kg) might help with the latter, as the F-35’s ejection seat design has been found to result in neck damage for scrawnier pilots.

Furthermore, the current Pentagon leadership is obsessed with making the military “look like America.” Obviously, they mean in the sense of “diversity” and hitting the LGBTQI+ quotas and such – but if we’re to be perfectly honest, America is also fat. That was true even before the Covid-19 lockdowns, which didn’t help, to say the least.

Unfortunately for the “chair force” – as other branches like to mockingly call USAF – there is a legal requirement for some kind of body composition measurement, which means the service is systemically fatphobic by definition.

“It’s also just about appearance in our uniform,” as General Kelly phrased it, adding that Americans “have to see us as credible warfighting people.”

Judging by comments left on Task and Purpose, good luck with that. “Wasn’t the chair force soft enough already?” asked one user. “What’s next, napping pods on the flight line?” said another. “I mean, we already have massaging recliners for the pilots, so why not?”

Being anonymous, they will likely escape the wrath of the Pentagon dished out back in March against Tucker Carlson. The Fox News host had committed unpardonable heresy by calling out the Air Force for maternity flight suits, you see – and the military responded by having dozens of public relations officers “smite” Carlson for “dissing diversity.”

Defense Secretary Lloyd Austin himself insisted last month that the US military is not “soft” but instead doing a “great job of recruiting the right kinds of people.”

Again, this was most likely meant as a reference to the rainbow coalition targeted by the new and “woke” recruiting ads. Austin’s comments were also meant as a response to Republican Senator Ted Cruz, who dared tweet a mash-up featuring Chinese and Russian recruiting ads as contrast – thereby committing treasonous sedition and insurrection against Our Democracy, or something.

Yet even Austin said that only those who are “fit” and “can qualify” will have a place on his team. Which makes one wonder if Kelly and the Air Force got that memo, or if Austin may not have been entirely serious.

Either way, the US military appears to be lowering standards all around and prioritizing “woke” politics and ideology over actual combat readiness. For people around the world “blessed” by its prowess in exporting “democracy and human rights” over the past few decades, that may not be such a bad thing.