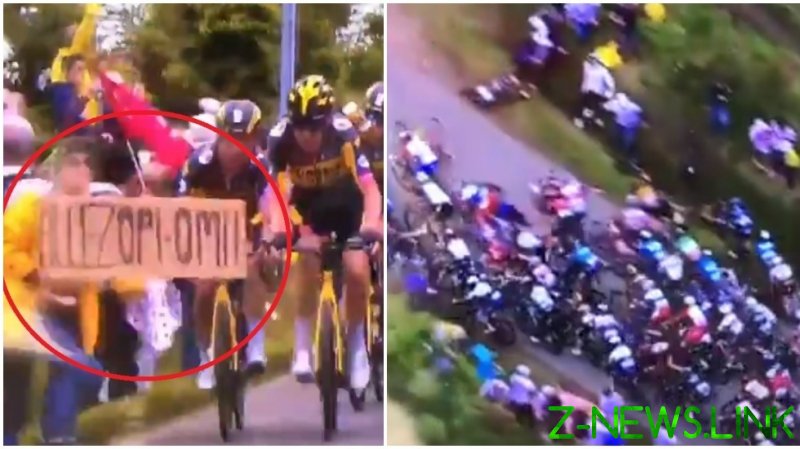 The speeding peloton had around 43kms to go of the Grand Départ stage through Brittany in northern France.

In scenes that have gone viral on social media, television cameras caught Tony Martin crashing into a cardboard placard held out by a overeager fan at the side of the road.

A string of Martin’s Jumbo-Visma teammates, including Primoz Roglic and Wout Van Aert, were caught up in the front of the crash, which almost brought the race to a complete standstill.

Scorn was immediately poured on the offending fan, who wasn’t even looking in the direction of the action that they single-handedly disrupted.

“The “A**hole of the Day” award goes to the spectator circled on the left in the yellow jacket at today’s Tour de France, for holding a sign out in front of the racers causing a massive pileup, and at least one rider has had to abandon,” wrote one angry onlooker on Twitter.

“So sick of seeing these ridiculous spectators trying to get air time on the Tour de France,” came one reply to that.

“I think they need to immediately pass a law that if any spectator causes a crash or touches a rider in any way, jail time will be involved based on the severity. It needs to end.”

“He should be arrested and charged with assault/GBH,” suggested another unimpressed party.

But not all the blame was placed on the anarchist, with someone else saying: “Honestly, [the] rider should have seen the sign and avoided it.”

“Reckless cyclists again. That poor woman must be shaken,” it was also said.

Amid relief nobody was hurt, a separate clip showed a close shave for one tot.

He was pulled out of harm’s way by his mother, for which she was dubbed “Mom of the Year” and a “f*ckin beast” for helping avoid an oncoming bicycle flying towards him and keeping her cell phone in hand.

But as one reporter called it the “worst crash” he had ever seen, some punters were quick to recall a horror incident in 2015.

That took place at Stage 3 won by Joaquim Rodriguez, and thankfully there were fewer spectators as it happened at a noticeably higher speed.