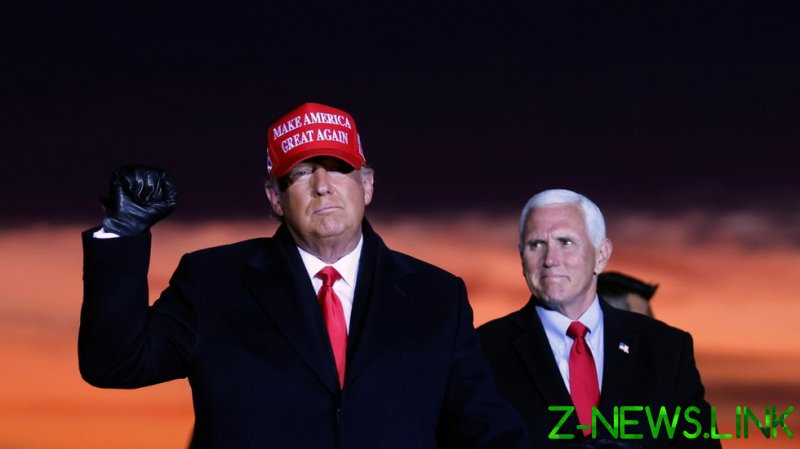 “The Vice President has the power to reject fraudulently chosen electors,” the president tweeted on Tuesday.

The comment came after Trump spoke in Georgia on Monday, telling supporters he hopes Pence “comes through for us.”

“Of course, if he doesn’t come through, I won’t like him as much,” he added.

The vice president will oversee Congress’ certification of Electoral College results on Wednesday. Though the Electoral College has already cast their votes, and the president’s numerous legal battles to overturn results in multiple swing states have not found traction in the courts, Trump and his supporters continue to allege fraud. They view Congress’ certification as one of the last opportunities to prevent Biden entering the White House.

Sen. Josh Hawley (R-Missouri) and other lawmakers are already planning on officially objecting to the results, though overturning the votes would require a simple majority of support from both the Senate and House of Representatives. That’s seen as highly unlikely, given the lack of support from Democrats and even some Republicans.

All eyes are, therefore, on Pence, but Trump critics have argued his role is largely ceremonial, mainly since there is no solid precedent for his objecting to the certification.

Pence will preside over the counting of the votes as president of the Senate. Pundits have argued back and forth over his legal authority in this situation, with Trump supporters arguing he has the power to deny Electoral College votes if they are fraudulent, and others dismissing this view altogether.

As the certification date draws closer, numerous mainstream media reports have described Pence as “torn” between his loyalty to the president and his authority under the Constitution, many of them citing anonymous sources to convey the infighting.

The vice president previously said through his chief of staff that he “shares the concerns of millions of Americans about voter fraud and irregularities in the last election” and “welcomes the efforts of members of the House and Senate to use the authority they have under the law to raise objections and bring forward evidence before the Congress and the American people on January 6th.”