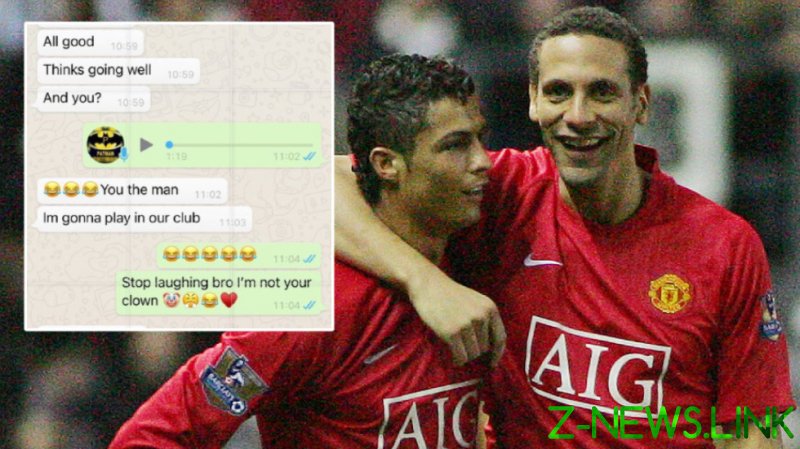 Ferguson, the club’s greatest ever manager and a mentor to Ronaldo after signing him from Sporting Lisbon in 2003, is said to have personally contacted his former star amid widespread reported interest from United’s arch-rivals, Manchester City, on Friday morning.

The 13-time Premier League title-winning boss is likely to have been unimpressed at the prospect of City, who he once dismissed as “noisy neighbours” during his dazzling era at the helm, snapping up the formidable forward beloved of United.

“He would have hated to see Ronaldo in a Manchester City shirt, just like any other person connected for a long time at this football club,” said the Portugal captain’s former teammate at United, Rio Ferdinand, speaking on Vibe with Five.

“I wouldn’t like it. I’d been going crazy like any fan but, at the end of the day, what do you want him to do?

“I rang him straight away. I said, ‘what is going on? Tell me you’re lying.’ At that time, we were seeing in the media and I don’t think City had bid, but conversations were being had and City were showing their hand.

“You can’t sit here and go ‘it wasn’t happening’ – there is no smoke without fire.

‘I’m like all the fans, exactly the same. I was like, ‘can you speak? Let me speak to you quickly’. I don’t want my kids seeing Ronaldo run out in a Manchester City kit.”

City remained favorites to sign Ronaldo when he made his sudden dramatic departure from Juventus on Friday morning, but Ferdinand said the 36-year-old “respects his legacy” too much to have overlooked the uproar from fans and some high-profile figures connected to United.

The former club captain appeared to be in on the act, providing a cryptic social media post in which he grinned knowingly shortly before the sensational transfer was announced.

Ecstatic fans have called for Ferdinand to be given a statue for his apparent part in proceedings, although current United playmaker Bruno Fernandes strongly hinted he was also involved.

A teammate of Ronaldo’s with Portugal, Fernandes responded to the news by tweeting: “Agent Bruno”.

Impish former United defender Patrice Evra insisted he had been in touch with Ronaldo, producing screenshots of purported chats with his former teammate in the immediate aftermath of the deal.

“You the man,” the messages showed Ronaldo telling Evra, laughing at a voice note the Frenchman had left him and emphatically adding: “I’m gonna play in our club.”

“People have to calm down sometimes,” urged Evra as he released the screenshots into the wilds of social media.

United coach Ole Gunnar Solskjaer played the situation well if he was aware of how close the club was to sealing the remarkable deal.

“We’ve always had a good communication,” he answered when probed on the matter in his press conference ahead of United’s trip to Wolves on Sunday.

“Bruno has been talking to him as well and he knows what we feel about him. If he was ever going to leave Juventus, he knows we are here.”

“Understatement,” he replied, when asked by one fan account if he was “excited to be playing with your idol”.

“Scary hours,” wrote Sancho, United’s new wideman who must be relishing the chance to play with one of the all-time greats.

United’s other major summer recruit, Raphael Varane, was a man of few words, simply sharing photos of the pair playing for Real Madrid together.

Varane and Ronaldo lifted no fewer than four Champions League trophies at the Bernabeu. Both they and United’s fans will hope they can replicate that success in England.