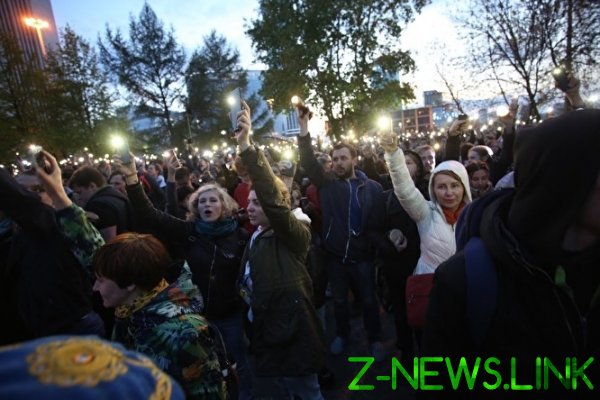 “The Church takes squares across the country”

In Yekaterinburg during the four days passed spontaneous protest actions in protection of the Park near the drama Theatre, where I want to build a temple. Due to mass protests, the city administration has announced that among the citizens survey will be conducted on the future of the green zone. This statement was made after the resolution of the conflict joined the President of Russia Vladimir Putin: the head of state declared that it is necessary to know the opinion of residents. Meanwhile, the anti-clerical sentiments are felt in other Russian cities, where there is also a shortage of recreational areas. About the geography of growing protests in the material Znak.com.

Following the example of Yekaterinburg oppose the construction of the chapel in the garden of remembrance to fallen police officers on the street Prygunov residents of Nizhny Novgorod. On Wednesday, the townspeople began to come out pickets on main street. In hands they held posters “In each square — bad Church! Ekaterinburg, the square in front of Drama. Nizhny Novgorod — Park on Prygunov”, “Church takes public gardens across the country. Squares — people! ROC — to the devil!” writes “Kommersant”.

The protesters wonder why the diocese chose for the chapel square and why it is needed, when the whole area of the city and so 14 churches. Earlier, the confrontation between supporters and opponents of the religious object was at the public hearings — one sang the Easter hymn, the other — the “Internationale.” While permission to build a religious facility is not obtained, but because his opponents are ahead of the curve and look back at Ekaterinburg, noticing that the Urals are “bold and creative”.

Similar events are now developing in Chelyabinsk, where this summer plan to begin construction of the chapel of St. Tatiana in the square in front of the South Ural state University. This project had a lot of scandals. Despite the fact that the decision on the construction of the Church agreed several years ago, opponents have no hope to stop the implementation of the project.

This week the local coordinator, “Open Russia” Denis Ibragimov sent a letter to the mayor, in which he proposed to take a decision on banning the construction of the Park near South Ural state University, to avoid conflicts with citizens. He gave the example of Yekaterinburg, where there are spontaneous protests, recalled that a similar conflict is smoldering in Chelyabinsk, and asked the mayor: “do You want to like in Ekaterinburg?”.

Ulyanovsk: “Another hotbed of tension”

Followed by Yekaterinburg residents and authorities due to the construction of the Cathedral can also begin in Ulyanovsk. Today, 17 may, townspeople plan to gather near the Palace of culture “UAZ” on Prospekt 50-letiya VLKSM, where they plan to build a Church of St. Alexander Nevsky.

There is already a wooden Church, but he allegedly did not accommodate all the parishioners, so I want to build a stone Church. Environmentalists claim that the construction of the temple will lead to cutting down more than 50 trees, according to 73online.ru. While public discussion of the draft was not.

“Out of the blue provided another source of tension. Instead of being civilized to offer to pick up a temple a place where there are no trees and not square, local residents decided to push on this ground and to give us a list of regions where the ROC is building a green area. Let me remind you that the city officially recognized the shortage of green areas, we have problems with air pollution”, — leads edition the words of one of the local residents.

The suburbs: the main temple of the Ministry of defense in the Park

Another example of the construction of a recreational zone — the main Church of the Ministry of defense in the Park “Patriot”. It is erected in the suburban town of Kubinka on voluntary donations. In social networks, there were reports about complaints of soldiers to collect money for the construction of the temple. Earlier, Russian defense Minister Sergei Shoigu said that the temple “will symbolize the spirituality of the Russian army, raising the sword only for protection of the Fatherland”. The steps of the temple will be cast from captured equipment of the Wehrmacht.

According to Shoigu, the idea of the construction of the temple “has been approved by the public, public authorities, military command, Supreme authority”. In the same Park, the defense Ministry is going to build the rides, aquarium and the ski centre.

Ulan-Ude: instead of the Park — military equipment

However, green areas in Russian cities being built not only churches. For example, in Ulan-Ude is being prepared rally against the construction of military-Patriotic centre on the site of the Park “Jubilee”. They want to place military equipment, and to organize a “partisan village”, writes “Taiga.Info”.

Construction work has already started soldiers of the Eastern military district. At the moment in the Park was demolished a Playground for dogs. “No plan, no drawings, we have not seen, with the citizens generally do not agreed, very quietly made the decision and already started to work. I don’t understand how you can build a comfortable environment and then to do it. Personally, my position is that the parks need to be left alone and nothing but trees and garden furniture, there’s no need,” he said about this well-known Buryat ecologist Natalia Tumureeva.

In addition, this week residents of Moscow’s Lyublino, inspired by the protests in Yekaterinburg, came to the rally against the construction of another high-rise buildings on the site of the Park.

“Against them came the other members of the community — builders who, apparently, are planning to live in these apartment buildings. Builders the Builder armed with a bulldozer”, — reported in Wednesday’s Telegram-channel Baza.

“Look at Ekaterinburg, respectum the mayor of Krasnoyarsk”

In spontaneous protest actions in the square in Yekaterinburg was attended by local residents, but also representatives of other regional centers. For example, was seen by the inhabitants of St.-Petersburg, Tomsk, Orenburg, Perm. They showed support to the Urals, to mention the fact that their cities faced similar problems. So, in Tomsk for several years, the citizens oppose the construction of the temple in the neighborhood Zarechny. First, they said that he would build a small chapel. But then in the diocese said that it will not be enough for such ceremonies as baptism, wedding and funeral service. So I decided to build a large temple.

Similar situations to the correspondent Znak.com reported Perm residents, who this week attended the protests at the drama Theatre. “We are surprised of such a unity of people. Never thought that the streets can get such a large number of inhabitants of Yekaterinburg. And after talking about the spontaneous protest, no one is forcing anyone to hold a meeting. In General, look at the Yekaterinburg and respectwhen the mayor of Krasnoyarsk, who refused to give up the Park for the construction of the temple,” — shared his opinion the inhabitant of Perm Sergey Vidyakin.

The head of Krasnoyarsk Sergey Eremin, recall, signed a decree banning the construction of Nativity Cathedral on the site of the Park. The decision was made “primarily in connection with the presence on the territory of the Park and required the demolition of green plantings”, reported the press service of the city administration.

According to local media, during public hearings on this issue 480 Krasnoyarsk citizens voted against the construction of the temple, 218. The other two, by its enactments, Krasnoyarsk mayor adjusted the location of the future temple, having agreed to use his land in a residential area “Sloboda Vesny”.