Home / WORLD / After Biden’s ‘killer’ comments about Putin, time to make a break in Russia-US relations; further engagement is pointless for now

After Biden’s ‘killer’ comments about Putin, time to make a break in Russia-US relations; further engagement is pointless for now 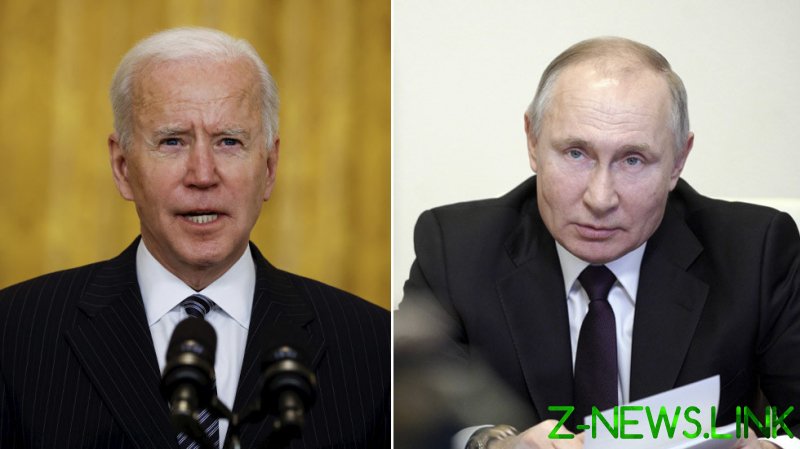 His answer was met with a wide range of reactions in Russia. Some say the American president isn’t quite capable of understanding the questions he is asked, while others suggest that this was Biden declaring war against Putin.

The first theory doesn’t seem credible – just watch the video. Biden speaks confidently and coherently, recalling his previous meetings with Putin that took place a long time ago. His answer to the question about Putin being a killer is somewhat demonstrative, actually. He is obviously in full possession of his faculties.

As for the second theory, we could make a conjecture and say that with his definitive statement, Biden gave a signal to the enemies of the Kremlin, telling them that the Russian president is officially an outcast and can be treated as such. But this would mean that Russia is an important issue on the US president’s agenda. However, judging by the interview and the political climate as a whole, this doesn’t seem to be the case.

Biden was speaking about America’s domestic issues. Putin’s name came up in the context of the recently released intelligence report detailing foreign election interference in 2020. In terms of the seriousness of the allegations, this document doesn’t even come close to what intelligence agencies were saying after the 2016 election. The main message of the current report is that Russians tried to sow discord in the hearts and minds of the American people, and Trump’s allies boosted this process – knowingly or unknowingly.

Another intelligence report, published on the day of the interview, further expounds this idea, saying that the stolen election statements made by Trump and his supporters incited domestic extremism in the United States. They are building a connection between external enemies and an internal ‘fifth column’ that is playing directly into the hands of this adversary. A classic move.

There are two possible conclusions one could make based on Biden’s statements.

First of all, it is obvious that domestic policy continues to be the top priority on the new administration’s agenda, just as it was during Trump’s presidency. Whoever hoped that a Democratic victory would put an end to all the internal conflicts tearing the country apart had hoped in vain. Democrats are eager to consolidate their success, and that’s where the good old ‘Russian interference’ tool comes in handy again. It is still a tool, not the goal.

Of course, it is also true that the Biden administration’s rhetoric about America ‘reclaiming’ global leadership is, to a large extent, a show. It aims to make the departure from ‘Trumpism’ crystal clear, but in fact the US will just carry on with the tactics of gradually reducing the scope of its obligations on the international scene. Gradually, as opposed to how Trump handled it, but quite more decidedly compared to Barack Obama’s presidency. In other words, it’s just a smokescreen concealing what’s really going on.

Secondly, and probably more importantly, Biden’s words are indicative of something trending in global politics, and that trend seems to be on the rise. Figuratively speaking, it’s something one might call a ‘loose tongue syndrome’ – which, in effect, means a growing gap between one’s words and actions.

A while ago, calling a leader of another country, especially a superpower, a ‘killer’ would translate to being ready to sever relations and face the consequences, some of which could be really drastic. It obviously doesn’t work like that anymore. In the same interview, after naming and shaming Putin, Biden went on to say without blinking an eye that one could “walk and chew gum at the same time.” In other words, Washington plans to interact with Moscow whenever and insomuch as it suits it.

This exaggerated sense of self-importance is rooted in the US leadership’s absolute confidence that they won’t have to face any real consequences for their behavior. In the 30 years since the end of the Cold War, America has become quite accustomed to being an all-powerful hegemon, and continues to view itself as such, despite the obvious issues it is facing.

The political establishment in Washington believes that relations with the US are valuable in and of themselves, and that any country – including China and Russia, which are openly recognized as strategic rivals – is willing to show humility in order to preserve these relations (or at least to prevent them from spiraling to open hostility). In other words, relations with the United States are perceived as being more important for external partners than for the US itself. This type of attitude was articulated quite succinctly a quarter of a century ago by Madeleine Albright, who described the US as “the indispensable nation.”

There is another reason, though. The absence of a tangible military threat or, more precisely, the absolute belief in and reliance on the concept of ‘deterrence’ bestows on American policymakers (to quote Russian novelist Nikolay Gogol) a “marvelous flow of ideas,” and turns international relations into some sort of an online video game. The norms and customs of diplomacy start to resemble the style of communication one encounters on social media – courtesy of Donald Trump, social media has become not only the main tool for promoting political ideas, but also their source and the key political battleground.

This has some advantages – similar to social media ‘s**tstorms’, the political fervor of senior government officials often remains limited to the verbal dimension, where it rattles for a time, and then expires. Still, even in a ‘gamified’ political environment, no one can guarantee that all actions, political or otherwise, will be contained by it. There is always a chance that you’ll have to take responsibility for your words – and the less wisely you pick those words, the riskier it will be once the matter breaks out in the ‘offline’ world.

Biden’s statement cannot be left without a direct response – at the very least because this will only boost Washington’s sense of ‘total impunity’ and reaffirm to influencers and officials there that anything goes. Recalling Russia’s ambassador back to Moscow for consultations was a natural step – but that’s not enough.

A more reasonable approach would be to freeze Russia-US relations with the exception of some essential ‘technical-level’ aspects. Most importantly, we must prove the US wrong in its conviction that it can act recklessly in all but every aspect of diplomacy while maintaining a useful level of interaction in areas that are important to American national interests. No, Mr. Biden, you cannot walk and chew gum at the same time.

Traditionally, Russia’s approach has been the opposite. Moscow never ceases to stress it’s willing to be constructive to the extent that the US is ready do the same. It makes sense to assume that the current state of affairs is a result of this approach – which means it’s time to give it up.

One would usually object by bringing up our common problems, arguing that it’s in the interests of both countries to solve them, and that some dialogue is better than no dialogue at all – even if we’re talking about potential future dialogue. One would also recall ‘the darkest pages of the Cold War’ as an example that our countries did manage to find common ground on critical issues such as security, and so on.

If we are to resort to such logic, then one should remember that those ‘darkest pages’ were marked by highly-structured confrontation and close attention to words and actions. The two powers were taking each other seriously and considering long-term prospects, meaning that none of the sides would even assume the possibility of a fatal weakening or even collapse of its rival.

Today, we don’t see any of that ‘serious’ or ‘long-term’ attitude. And we watch the pillars of strategic stability (which used to be the foundation of stability in general) undergoing erosion before our very eyes. The dialogue that has been expanding (or shrinking) over the last few years was not producing any new agenda – it was destroying the existing one.

The system of international relations is undergoing a truly fundamental shift, the result of which remains unknown. Caution should be exercised – the main virtue of international politics, especially when a nation’s domestic problems outweigh any of its external issues. In this situation, it would only seem natural to want to reduce external interactions to the absolutely essential – or to those guaranteed to be fruitful. It is difficult, however, to see any value in relations that are based on conflict, yield little to no results, or are smeared by either party attempting to insult the other.