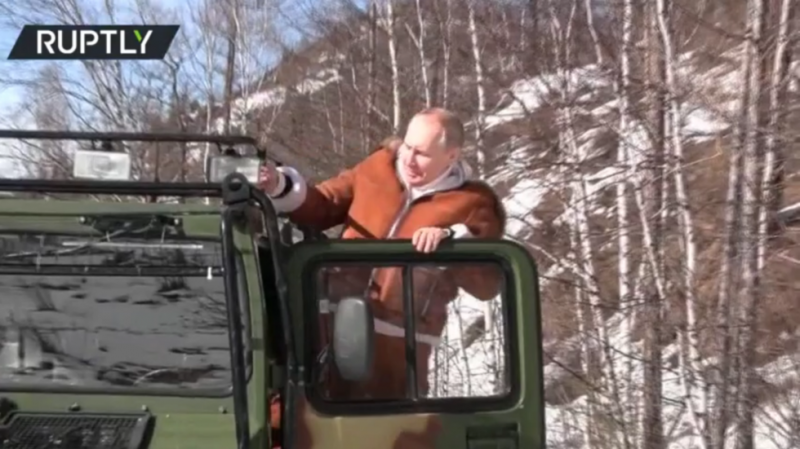 The Kremlin, which released the images of Putin’s trip on Sunday, would not disclose where exactly the president went. However, a good guess would be the Republic of Tuva, the home region of Defense Minister Sergey Shoigu, who accompanied him during the getaway.

Shoigu showed Putin what seemed to be his workshop, according to the video and its description. The space is apparently used for woodworking, and the minister was filmed explaining to the president how to arrange driftwood and branches for crafts. They also took a ride on a tracked articulated all-terrain vehicle, with Putin taking the wheel and his host in the passenger seat.

The weekend apparently included watching wild animals, walking through deep snow, and snacking under fir trees – but no bare-chested horse-riding or creek-swimming, for which Putin’s days off in the great outdoors are best known in the West.

Earlier this week, the Russian president became entangled in a media-driven spat with his US counterpart, Joe Biden, who answered in the affirmative when asked was Putin “a killer,”during a TV interview. The American leader promised he would pay a price for allegedly interfering in the domestic affairs of the US.

Putin responded by wishing Biden good health and challenging him to publicly discuss the many issues that the two nations have with each other, and wider global affairs. The White House did not accept the offer, but Biden later told journalists, “I’m sure we’ll talk at some point.”