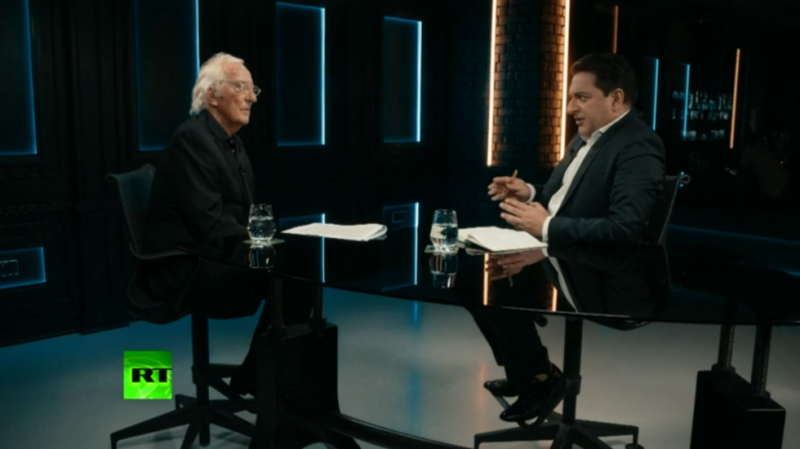 Pilger joined RT’s Going Underground program to reflect on the lessons that should be learned from two decades of occupation in Afghanistan, which ended in an ignoble withdrawal last month. He warned against remembering the military misadventure as a sort of “good war” justified by the threat of terrorism. Just like wars in Vietnam or Iraq, the war in Afghanistan was waged in the interest of Western imperialism.

The term didn’t even have any negative connotation in the 19th century, Pilger said. On the contrary, Britons “fought for the reputation of being imperialists, Christian gentlemen going off… to spread the power of the imperial center. And that’s what we’ve had for 20 years in Afghanistan,” he said.

You don’t need to look hard to find proof of that, Pilger argued. Then-British prime minister Tony Blair, “an almost caricature imperialist,” in Pilger’s words, was quite forthcoming about the intention of the occupation when he championed it in the wake of the 9/11 terrorist attacks. He called the surge of support for military action “a moment to seize.”

“The kaleidoscope has been shaken, the pieces are in flux, soon they will settle again,” Blair said in a speech in October 2001. “Before they do, let us reorder this world around us.”

“That is one of the clearest statements of an imperialist,” Pilger said. “In other words, ‘We are going into a country, we’ll blow it all up, we’ll change it all around, we’ll undermine its culture, we’ll kill its people, and we’ll make it a better place.’”

The Afghan invasion was successfully sold to the Western public on the basis that the 9/11 attacks were orchestrated from Afghanistan, where Osama Bin Laden enjoyed the hospitality of its Taliban government under the Pashtun code of honor. The Taliban offered to hand over the terrorist mastermind for a trial in a third country operating under Sharia law, if proof of his responsibility for the attack were provided.

The hawkish Bush administration rejected the face-saving arrangement and invaded with full force. It later refused to accept a deal that Washington’s handpicked new ruler of Afghanistan, Hamid Karzai, negotiated with Taliban leaders. The Islamists offered to retire and distance themselves from politics in exchange for an amnesty. Denied, they went into exile or hiding, only to emerge several years later leading an increasingly powerful insurgency against the government in Kabul and its Western sponsors.

Ironically, the Clinton administration reportedly courted the Taliban government in the mid-1990s, seeking their cooperation in an ambitious project to construct a pipeline from Turkmenistan to Pakistan and India. Turkmen gas could then be sold to consumers in Europe, competing with fuel from Iran and Russia.

“[Afghanistan under] the Taliban had been a client state of the US,” Pilger insisted. “The Taliban leadership, including some of the people we are seeing now, were invited to the United States.”

Just like the invasion itself was justified as a crackdown on terrorism, the continued military presence was sold to the Western audience by the need to preserve the progressive achievements of the US-backed government. It’s true that in some places, like Kabul itself, life became safer and much more liberating than under the rule of the Taliban. But Afghanistan’s hinterlands, where most of the country’s population lived, remained a medieval patchwork of fiefdoms ruled by warlords who preserved their oppressive habits, Pilger pointed out.

“They traded in women and young boys, they ran the heroin trade. And of course the CIA, which were their principal backers followed very closely by MI6, knew all about this,” he said.

A few decades earlier, he added, the US had no qualms about hurting Afghan civilians when it backed Islamist forces against the government of the Soviet-supported People’s Democratic Party of Afghanistan (PDPA). Some of its policies were extraordinarily progressive for Afghanistan, like equal rights for women and literacy programs. A 1979 cable from the US embassy in Kabul cited by Pilger said that the broader US interest “would be served by the demise of the PDPA government, despite whatever setbacks this might mean for future social and economic reforms in Afghanistan.”

You can watch the full episode below: