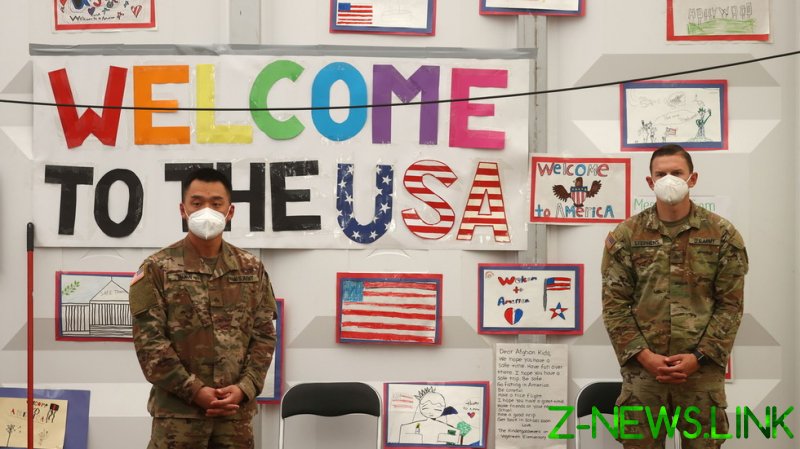 US veterans worked with several private charities to leverage their contacts in Afghanistan and Pakistan and extract Aman Khalili and his family, after the US-led airlift from Kabul ended on August 30, leaving them behind.

They were successful last week, driving Khalili, his wife and their five children about 600 miles across Afghanistan and across the Pakistani border, the Wall Street Journal reported.

Khalili was the interpreter for the 82nd Airborne force that was deployed from Bagram Air Field to rescue Biden and his colleagues John Kerry (D-Massachusetts) and Chuck Hagel (R-Nebraska) in February 2008, when their helicopter made an emergency landing in Afghanistan during a bad snowstorm.

He tried applying for the special immigrant visa (SIV) to take his family to the US in 2016, but was denied because the contractor he worked for had reportedly deleted their records. When they arrived at the Kabul international airport, Khalili was told he could come in – but his family would have to stay behind. He refused. A day after the Kabul airlift ended, the Journal reported on his plight, printing his personal plea to Biden.

“Hello Mr. President: Save me and my family. Don’t forget me here,” said Khalili, then identified only as ‘Mohammed.’

According to the Journal, Khalili went into hiding. US veterans trying to help him were told moving the family to a safe house would cost $11,000, then $900 per night, and another $11,000 to get them to the airport safely. Four of out five of Khalili’s children did not have passports, either. One philanthropist eventually got them a safe house at no charge, while various groups tried to organize an evacuation.

Multiple outfits, including one led by former Blackwater boss Eric Prince and news personality Glenn Beck, tried and failed to get Khalili out of Afghanistan. The outfit that succeeded was Human First Coalition, a charity led by Afghan-American translator Safi Rauf that has reportedly helped more than 6,700 people – including 1,000 Americans – leave Afghanistan since mid-August.

“We made a promise to these people that if you help us bring democracy to Afghanistan and justice to America we will not leave you behind. I believe we owe these Afghan people a dignified life,” Rauf told the WSJ.

The US State Department confirmed on Monday that the Khalilis had left Afghanistan, and were scheduled to fly to Qatar on board a US military flight. Deputy Secretary of State Wendy Sherman, who was in Islamabad for scheduled meetings, reportedly helped arrange their documents with the Pakistani government.

According to the WSJ, the White House asked Secretary of State Antony Blinken’s chief of staff, Suzy George, to personally oversee Khalili’s case. She helped fast-track the interpreter’s request for a special visa.

“After 144 hours of driving day and night and getting through so many checkpoints my family was so scared, but right now this is a kind of heaven,” Khalili told the WSJ. “Hell was in Afghanistan.”

More than 122,000 people were evacuated during the two-week airlift from Kabul. Of that number, fewer than 6,000 were US citizens and the vast majority were Afghans looking to escape the Taliban. Hundreds of Americans were left behind, along with anywhere up to 75,000 Afghans considered ‘at risk’ from the new Taliban government, according to some veterans’ groups.