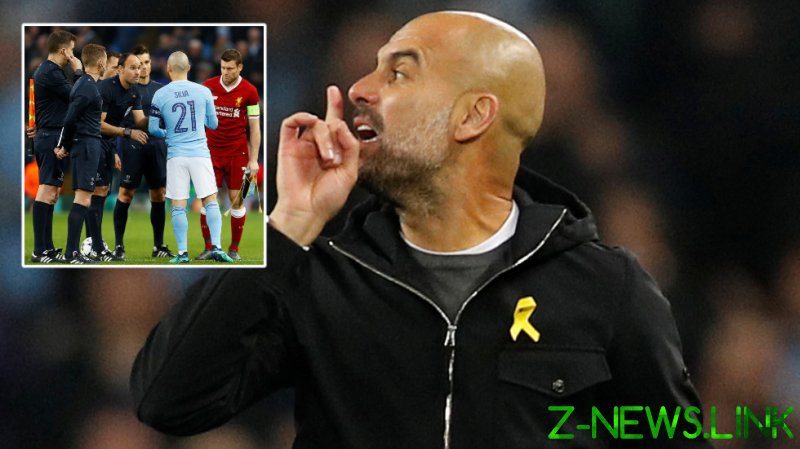 Guardiola has made clear that he isn’t the biggest fan of the Spanish official after recent run-ins with him saw City’s opponents awarded three penalties in the last three games in which Lahoz has refereed Guardiola’s men.

Their fractious relationship doesn’t end there. Lahoz also issued his compatriot with a red card after the pair clashed several years ago when an enraged Guardiola confronted him after a Leroy Sane goal was disallowed in Manchester City’s Champions League second leg defeat to Liverpool in 2018.

An incensed Guardiola continued the war of words in the post-match press conference – almost a year to the day after he was infuriated by another Lahoz decision, this time in not awarding his team a penalty in their quarterfinal defeat at the hands of Ligue 1 outfit Monaco.

Subsequent replays appeared to show that Guardiola’s complaints were valid, despite Sergio Ageuro being issued with a yellow card for simulation.

“I said it [Sane’s strike] was a goal,” said Guardiola of his confrontation with Lahoz in 2018.

“I know what happened in Monaco last season, at 1-1, with an incredible penalty from Sergio Aguero. He’s special. When everybody sees things, he likes to decide the opposite. I didn’t say any wrong word.

“We were 1-1 at home against Monaco when there was a clear penalty to Aguero and a red card that a Spanish referee did not whistle for,” Guardiola later added.

“We went from a possible 2-1 to 1-2. These types of situations are really important.”

Guardiola and City will be desperate for any type of psychological edge, having come up short in two games in recent weeks against their Champions League Final opponents Chelsea.

The Londoners, who are still buoyed by the impressive start Thomas Tuchel has enjoyed since taking the reins from Frank Lampard in January, ended Guardiola’s hopes of securing an historic quadruple of trophies when they beat City in the FA Cup semi-final last month – then followed that up last weekend with an impressive 2-1 Premier League win at the Etihad.

Whether or not Lahoz is a bad omen for Manchester City and Pep Guardiola, you can be sure that some popcorn will be required for the manager’s post-match press conference if a few decisions don’t go his way.