Home / WORLD / Activists claim that changing sex is a way to solve your problems, but will it really make you happy? Some experts aren’t so sure

Activists claim that changing sex is a way to solve your problems, but will it really make you happy? Some experts aren’t so sure 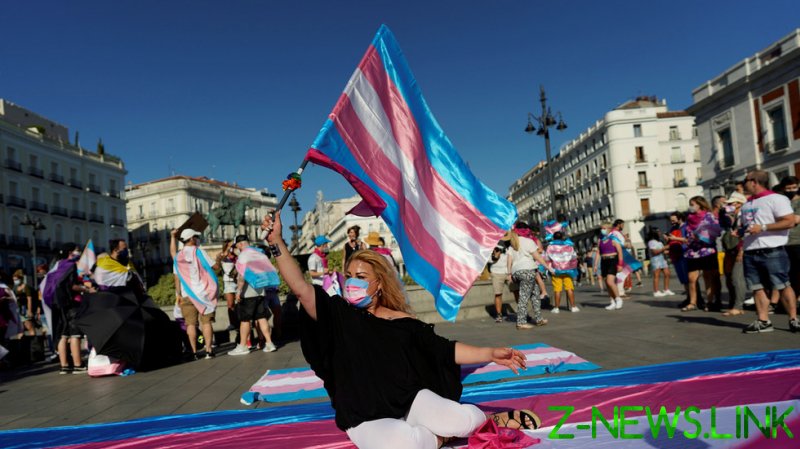 In particular, just 0.6% of all US adults identify themselves as transgender, the study showed. While there was no specific data on the issue in the previous report, a similar percentage was discovered by the Williams Institute of Los Angeles a year earlier. “This figure is double the estimate that utilized data from roughly a decade ago,” the study said in 2016.

At the same time, research from strategy consulting firm Global Market Insights estimates that the sex reassignment surgery market in the US will grow by a quarter in five years, hitting $1.5bn by 2026.

Stefano Eleuteri, sexologist and PhD in social, developmental psychology and educational research at Sapienza University of Rome, says it’s not the case that there are actually more people who feel they are in the wrong body, but rather social acceptance has allowed those who would have been quiet in the past to speak out.

“What I see in the clinical activity is that there are a lot of older people who discovered themselves to be transgender, who knew it before, but didn’t have an opportunity to recognize it,” Dr. Eleuteri told RT. “What we see in Italy is not the tendency towards surgery, but more possibility of being recognized from an anagraphic point of view, as in Italy there is a possibility of being recognized as a person with another gender even without surgical operation since 2015.”

Eminent American-Canadian sexologist Ray Blanchard, a professor of psychiatry at the University of Toronto, also sees the reason behind the increase as more social acceptance. “In previous times, 30 or 50 years ago, it was very difficult for an adult male who is a husband and father to leave his family and say, ‘I’m now going to live as a woman.’ So I don’t think there’s an increase in the number of people who feel gender dysphoric, but I think it has become more socially acceptable to leave your family and decide you are going to live as a woman.”

“It used to be a medical issue, it used to be a psychological condition people suffered from, and gender transition was something people did to relieve the symptoms of psychological distress,” says Debbie Hayton, a school science teacher and author from the UK. Being transgender herself, she is concerned that the identity issue is attracting more media and social media attention.

“When you were transitioning, you were given certain rights,” Debbie continues. “The usual safeguarding procedures, like taking precaution against abuse, are being extended to a wider group of people who don’t necessarily change their bodies, or even have no intention to change their bodies, but just want to belong to this group.”

US author and speaker Walt Heyer agrees with her. “I’m not sure there are actually more people [feeling they are transgender], I think more people are speaking out about this,” he told RT. “In my view, the activists become more emboldened. They are in the schools, they are on the television shows, they get a lot of media attention. There’s a lot more emphasis on this.”

30 years ago, Walt realized he made a mistake when he decided to become a woman. After spending eight years in a female body, he reversed his sex change. Since then, he has been helping people who regret their transition. Walt calls what he sees now “a social contagion.”

“I think the internet – and Covid – became the incubator for more people talking about it. People went online, they got these ‘transgender chat rooms’. I recently worked with four girls in their teens who identified as transgender, and I worked with them for only one or two weeks. They said they didn’t want to be transgender, just their friends were online and it was a way to connect with people.”

‘It’s difficult to be a child growing up’

The previously mentioned Gallup research shows that one in six adult members of Generation Z “consider themselves to be something other than heterosexual,” with 11.5% of all US adults born between 1997 and 2002 saying they are bisexual, and about 2% each identifying as gay, lesbian, or transgender.

In the UK, it was reported last year that the number of gender identity patients younger than 18 referred to the Gender Identity Development Service for Children and Adolescents, run by the Tavistock Clinic, grew from 77 in 2009 to 2,590 in 2018-19.

For Debbie, the young age of the growing part of the transgender community is a very alarming trend. “When it comes to adults who have reached physical, sexual, and mental maturity, they are in a position to decide if they want to make changes to their body, to do that,” she says.

While attending to transgender patients, professionals follow the guidelines from the WPATH (World Professional Association for Transgender Health), Dr. Eleuteri told RT. When it comes to young people, it’s crucial to differentiate adolescent problems, or other clinical problems, from gender dysphoria. “We ask a lot of questions, check the adherence the person had during the treatment, whether there is any incoherence they can explain regarding their past, how is their sexual desire, what is their sexual development. We do the Minnesota Multiphasic Test (MMPI), check some covert sides that people can’t understand, but we can see. There are a lot of tests.”

From his experience, Walt Heyer can say what happens when teenagers’ problems are not taken into account. “One girl had identified as a boy from the time she was 10. Now she is 13, and when I asked her about why she did this, she said ‘I had a very bad dad.’ She was harmed by her dad, so it was an escape from trying not to feel that pain. I worked with an 18-year-old boy who said he was in a family of nine children, and he said ‘I didn’t even feel like I existed, so I decided to identify as a transgender. And I got everybody’s attention.’ Three years later, he’s de-transitioning. He said ‘it was just an experiment.’”

“It’s always necessary to wait, because we know that gender dysphoria in children can have different outcomes,” Dr. Eleuteri explains. “One quarter of them will become adults with gender dysphoria, half of them will become homosexual with the gender assigned at birth, and a quarter of them will become heterosexual, recognizing the gender assigned at birth. So, of course, during childhood, we should always watch and wait. During adolescence, the disorder is usually more stable, so in some countries they can do hormonal therapy. We know it’s a risk to give hormones to adolescents, it’s needed only in particular cases.”

Still, not all people who identify as transgender choose to contact a specialist. “There’s no other branch of medicine I know where the condition is diagnosed by the patient, and the treatment is required by the patient,” says Debbie Hayton. “Usually, the condition is diagnosed by a doctor, and the treatment is advised by a doctor. This is a condition diagnosed by a patient, whether they have been advised by friends or by social media influencers. That alone should be raising questions, but anybody who challenges this is then being told, well, you are denying someone’s identity, you are engaged in conversion therapy, you are engaging them to convert to somebody else.”

Professor Blanchard supports this concern. “Some proportion of teenagers, we don’t know how many, but I don’t think it’s tiny, are ending up having had breast amputations, having had parts of their bodies irreversibly changed by testosterone, such as their vocal cords, and then they decide ‘Oops, that was a mistake, it wasn’t what was wrong with me,’ but there’s no way back. I mean, you could have breast implants, but it’s not like having natural breasts; there’s usually not a lot that can be done about the voice change caused by testosterone.”

Some of these people decide to ask Walt for help – and their number is growing, he notes. “I’m getting a lot more people contacting me about having regretted transitioning. I had someone contact me who had surgically changed gender in October, and now they regret it, only in six months. That’s not unusual. I had someone regretting it only three weeks after surgery. There’s a lot more people saying that they identify themselves as transgender, and they later find out they are really not.”

“We should not force anyone neither to be transgender, nor to be cisgender,” Dr. Eleuteri insists. “We have a lot of data that children born in families with a transgender mother or father, or in homosexual families, who don’t identify themselves as LGBT+ persons. Sometimes, there is a provocative effect of some activists. Now we see a lot of adolescents identifying as non-binary, or transgender, but these are just masks, because when they grow up, they know exactly who they are and what they want to do.”

According to Heyer, social pressure, certain TV shows, and media hype are to blame. “People think that it’s all fun and games until they get involved in it. And then they realize it’s causing them great harm and they really don’t need to do it.”

‘Science wins when there’s nothing at stake’

“People who have seen what’s happening and are concerned about it, people like myself – when such people open their mouths and say, this is wrong, they get an awful lot of criticism, even condemnation,” says Debbie. “We are told we are bigots, hateful people, and worse… We need to have confidence and keep going and not be silenced. We are not preaching hate, we are not bigots, and we are not horrible people, but we are people who are just defending science and defending reason, and extending arguments.”

For his part, Heyer has met with social disapproval many times during his activist career. In 2020, YouTube censored a video featuring his comments under its hate speech guidelines. “Trying to control the media, we have to understand that nobody is ever going to say (except for me and a few other people) anything against it, because you’ll get cancelled, they’ll take you down, they’ll eliminate you,” he says. “It’s very difficult for rational, sound voices to be able to talk to these young people.”

As for Professor Blanchard, during his decades-long experience, he has also faced LGBT activists’ condemnation. “More and more I’m feeling like scientific facts don’t always win the day,” he told RT. “Science wins when there’s nothing at stake, when nobody cares about the outcome. Archeological findings – that’s where you can do pure science.”

Hayton supports this point: “It’s not acceptable to deny science, to deny reality and biology, and it’s not acceptable to tell children, you can choose your sex. This is not going to go away by itself, it will only go away if enough people say, this is wrong, and this needs to stop.

“Having been through it myself, being somebody whose body was changed – it does work. It does help. It’s not true to say changing the body doesn’t help – it does. But when you hear what trans people say… People are still not happy, and their mental distress seems to get worse in many cases.

“So you hear people say, I’ve transitioned, but I’m still not happy, and they try to blame other people, like: People don’t believe me, people are invalidating my identity, people are not believing in who I am. Partly, it’s a simplistic solution – that you can change your body and it will solve things.”