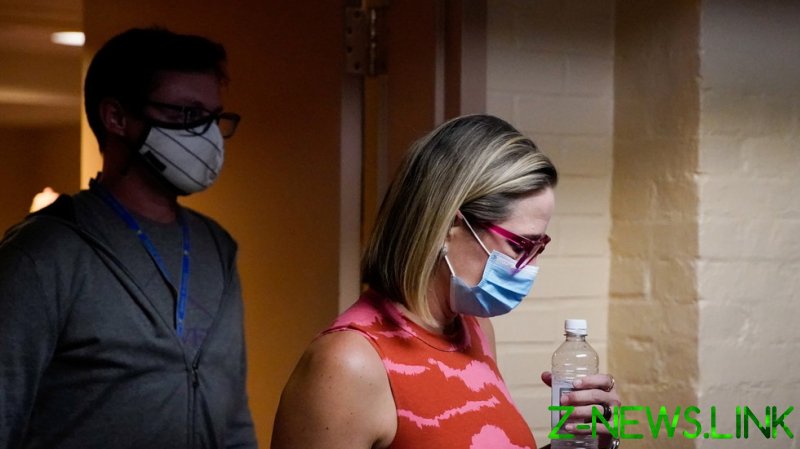 Videos posted by the progressive group Living United for Change in Arizona (LUCHA) showed protesters outside a fundraiser in Phoenix, as well as activists following the senator around the Arizona State University campus, filming her and following her into a bathroom.

As the activists follow her, Sinema eventually locks herself in a bathroom stall.

“We knocked on doors for you to get you elected,” one of the protesters says after the senator disappears into the bathroom stall, “and just how we got you elected, we can get you out of office if you don’t support what you promised us.”

Sinema eventually leaves the stall, washes her hands, and continues ignoring the activists.

“This is over the line. Gross, unnecessary, and counterproductive. Get a grip,” writer Amanda Carpenter tweeted in reaction to the video, which was quickly spread after LUCHA proudly posted it.

“If you think this will be effective in moving Sinema, ask yourself when the last time was that you took unsolicited advice from a stranger in a bathroom,” reporter Garrett Haake added.

Sinema has earned the ire of some fellow Democrats over her refusal to support the Build Back Better Act, which introduces social ‘infrastructure’ spending that amounts to $3.5 trillion. Sinema’s support is key for the bill to pass the Senate, leaving the bill in a standstill.

Sinema and others have also called for Democrats to focus on a bipartisan infrastructure bill. Some House Democrats, however, have said the $3.5 trillion package must pass first. Sinema blasted Congress over the weekend for failing to hold a vote on the bill, which she called “inexcusable.”

“My vote belongs to Arizona, and I do not trade my vote for political favors – I vote based only on what is best for my state and the country,” she said. “I have never, and would never, agree to any bargain that would hold one piece of legislation hostage to another.”