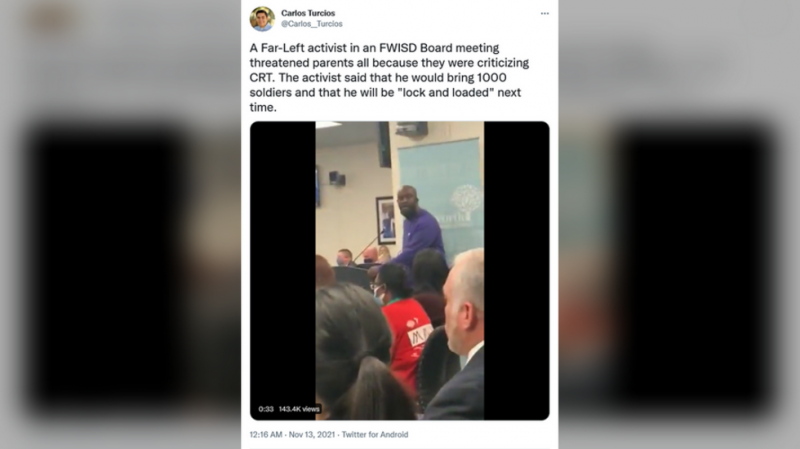 Video of a meeting of the Fort Worth Independent School District board shows Malikk Austin arguing that he fights for “critical race theory equity” for the sake of his children, and that he’s got “over 1,000 soldiers ready to go.”

“How dare you come out here and talk about the things that my daddy and my grandparents went through, the lynching, the oppression, Jim Crow, and my kids are still being afflicted by this,” Austin said at the November 9 meeting, adding, “We are not our ancestors.”

The incident was captured on video by Carlos Turcios, a conservative activist who was also at the board meeting. The footage also shows Austin saying his “soldiers” will be “locked and loaded” as he is being ushered away by law enforcement.

Reached by Fox News for comment on Sunday, the activist said he wasn’t threatening anyone.

“That’s a term I used when I coached football. It means, ‘Prepare and get ready,’ ” he said.

Hollie Plemmons, the woman Austin was arguing with at the meeting, told Fox News his words “absolutely” made feel threatened, and that in her understanding the phrase depicts an act of preparing a rifle to fire.

“I’m scared, and I’m afraid he’s going to do something,” she said.

Another person who was there, Carol Guarneri, claimed that Austin had shown up in “tactical gear” at an August meeting and described himself as a “revolutionary.” Turcio also claimed Austin was part of an “armed group.”

Conservative activist and researcher Christopher Rufo, who has turned into one of the harshest critics of the theory, commented on the reports about the incident on Monday by posting a photo of a man he identified as Austin posing for a photo with a group of black-clad gun-toting people, which he referred to as his “former militia.”

Neither the DOJ nor the FBI have commented on the incident yet. Fort Worth police told Fox News they had received no complaints over the meeting.