Home / policy / Action in memory of Boris Nemtsov in Moscow was attended by 10,5 thousand people

Action in memory of Boris Nemtsov in Moscow was attended by 10,5 thousand people 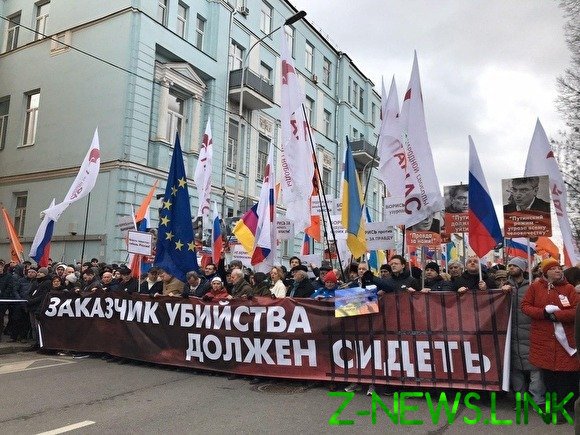 In Moscow held a March in memory of Boris Nemtsov, who was murdered in 2015 near the Kremlin. According to the “White counter”, the event was attended by 22.3 thousand people, according to GU MVD in Moscow — about 10.5 thousand the Action was coordinated with the authorities of Moscow and was detained.

The demonstrators marched from Strastnoy Boulevard to Sakharov Avenue. The head of the column they were carrying a banner that says “the Customer of murder have to sit”. The event was visited by Jeanne Nemtsov, Alexei Navalny with his wife, Lyubov Sobol, Ksenia Sobchak and others. One of the organizers, Ilya Yashin during the March were asked to stop and to honor the memory of Boris Nemtsov, a minute of silence. “Nemtsov’s March occurred in the center of Moscow. Tens of thousands of people took to the streets to Express their attitude to what is happening in the country. […] I really liked the atmosphere on the March. No fear, no learned helplessness. It was a loud sea of citizens who feel their innocence and sense of participation. Free people” — he wrote later in Facebook.

Similar protests were held in Saint-Petersburg, Yekaterinburg, Novosibirsk, Kazan, Chelyabinsk and other major cities of the country.

February 27, 2015 Boris Nemtsov was gunned down on Great Moskvoretsky bridge in Moscow. In opposition were four bullets, he died on the spot. The perpetrators of the crime were from 11 to 20 years of imprisonment. The customer of a crime are still not found.