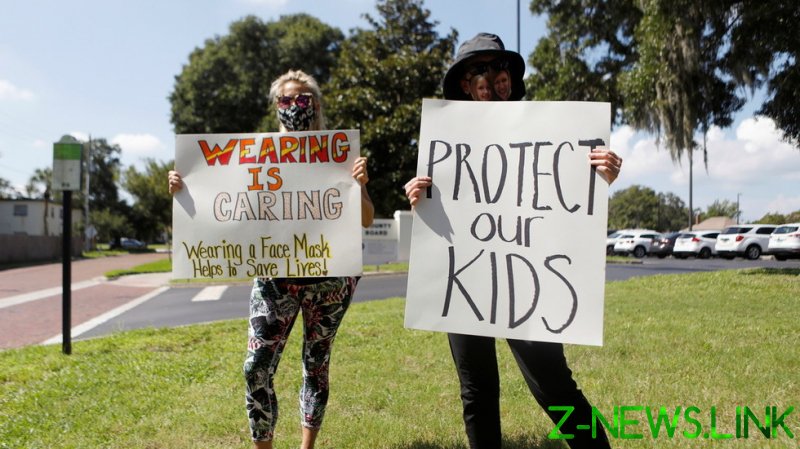 “Students with disabilities are effectively being excluded from public schools” because their peers are not forced to wear masks to class, the American Civil Liberties Union tweeted on Tuesday, declaring that “courts must intervene.”

The ACLU filed its suit alongside Disability Rights South Carolina, Able South Carolina, and an unspecified number of parents. They did not explain how children with disabilities were being discriminated against under the mandate, which does not prevent children who want to wear masks from doing so.

Instead, the ACLU cited the Americans with Disabilities Act (ADA) and the Rehabilitation Act, observing that vulnerable students – particularly those with existing conditions like diabetes, which could put them at risk if they caught coronavirus – were being “effectively excluded from public schools.” Those laws also prohibit denying students equal access to their education or segregating them unnecessarily, raising the question of how students with respiratory conditions who cannot ‘mask up’ are supposed to receive an education.

“Prohibiting schools from taking reasonable steps to protect the health of their students forces parents to make an impossible choice: their child’s education or their child’s health. This is a disability rights issue,” said Susan Mizner, the director of the ACLU’s Disability Rights Program.

South Carolina’s Republican-majority legislature has barred school districts from using state funding to require masks with the passage of the state budget earlier this year, but several schools have tried (and failed) to impose theirs anyway. The city of Columbia’s Mayor Steve Benjamin, a Democrat, attempted to buck that law earlier this month by imposing a local mandate requiring masks to be worn in dozens of schools and daycare providers. However, state Attorney General Alan Wilson filed suit on Thursday to overturn that mandate, denouncing it as a “clear-cut example of the city exceeding its municipal powers.”

While the ACLU’s suit does not specifically mention Wilson, Mayor Benjamin has dug in his heels on the mandate, vowing to take the matter all the way to the Supreme Court if needed.

However, a number of commenters on social media seemed baffled at how banning mask mandates could harm disabled children, noting that there was nothing in the legislation preventing children from wearing masks themselves, or from otherwise receiving aid in keeping with their disability.

Others attempted to remind the ACLU what it stood for, a subject that has been hotly debated in recent years.

South Carolina Governor Henry McMaster has reasoned that parents should have the choice of whether or not their children wear masks to school, a view shared by AG Wilson.

McMaster is not the only governor to adopt a blanket ban on mask mandates – Florida’s Ron DeSantis and Greg Abbott of Texas, also Republicans, have done the same. Both have also faced bitter recriminations from political opponents – specifically, school board administrators – who insist that allowing parents to choose whether or not to mask their children amounts to pronouncing a death sentence on the children or their peers.

Mask mandate wars are not limited to South Carolina. Also on Tuesday, Missouri Attorney General Eric Schmitt filed a class action lawsuit against the Columbia Public Schools (no relation to Columbia, SC), the Board of Education for the School District of Columbia, and its members and Superintendent, demanding they repeal the locally placed mask mandate currently in place on the district’s students and teachers.

Citing a voluminous amount of scientific papers, Schmitt warned the district’s actions ”[flew] in the face of science” and pointed out that Columbia’s City Council had already rejected a mask mandate earlier this month. Schmitt has already secured a preliminary injunction against St. Louis County blocking its own mask mandate.