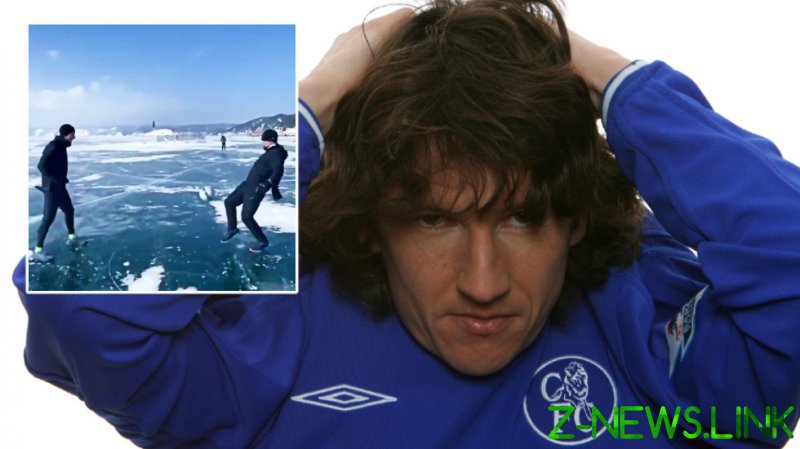 Dressed in gloves and a woolly hat, brave Smertin showed nifty knee and footwork to keep a ball up on the ice with friends ahead of the annual Baikal Ice Marathon, a remarkable 26.2-mile race which takes place on a lake surface.

The daring 45-year-old showed he still possessed some of the ample skills that took him to the 2002 World Cup and Euro 2004 in a much-needed warm-up, and he proceeded to prove that he is just as competitive and as willing a runner as he was during a celebrated career that was largely spent on mercifully ice-free pitches.

Regularly rated as one of the most difficult and extreme races in the world by a plethora of media outlets and fitness magazines, the marathon takes place as part of a wider sports festival in the region on a highly unusual surface that tests runners to their limits.

Small “hills” of ice rubble cover geothermic springs across the route, with seismic activity causing melting that forms holes and cracks in the ice.

The flat course is hard and uneven with areas of highly polished ice that are described as being similar to an ice rink, not helped by the potential for strong winds and ultra-challenging cold.

Organizers describe the race as “psychologically and physically demanding”, explaining that the “utterly featureless landscape” gives “little or no sense of perspective to competitors, offering them nothing to focus on but how far they are from their goal.”

“It is a long, cold, lonely trail across the barren white landscape, where progress is marked only by checkpoints positioned at 5km [three-mile] intervals,” they say.

“However, many of those who once ran the Baikal Ice Marathon return again – some again and again.”

Should Smertin return next year, the 2005 Premier League winner will be the man to beat. Almost 22 years after becoming the Russian Footballer of the Year, he scooped his latest honor by winning the race in an impressive finishing time, clocking in a shade under three-and-a-half hours.