Home / WORLD / A year on from imposing its ‘draconian’ new security law in Hong Kong, has China ‘crushed democracy’ in the former British colony?

A year on from imposing its ‘draconian’ new security law in Hong Kong, has China ‘crushed democracy’ in the former British colony? 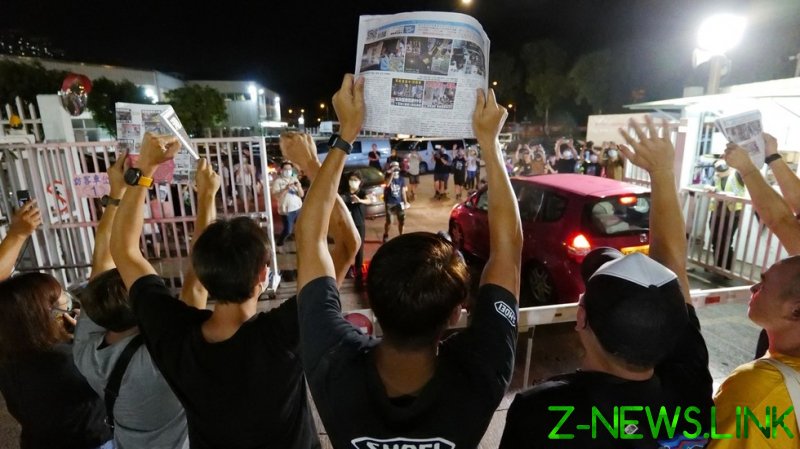 It’s now been one year since China’s National People’s Congress passed the “National Security Law” – a sweeping bill tailored for the Hong Kong special administrative region. Following a series of extremely violent protests encouraged by the US and others in 2019, the bill criminalized secessionism, treason, subversion and terrorism in the territory, as required by Hong Kong’s basic law mini constitution. It didn’t take long after that to bring the protest movement to an end.

Critics, of course, have repeatedly accused Beijing of “crushing democracy” in the former British colony. Leading protest figures, such as Joshua Wong, Nathan Law, and Jimmy Lai, have been jailed or have fled. Lai’s newspaper, the Apple Daily, was also closed down, while the opposition in the legislative council has since long resigned.

Unsurprisingly, the US has retaliated by imposing sanctions on certain officials, including city executive Carrie Lam among others, and repeatedly yields the rhetoric that it “stands with Hong Kong.” The UK has, in a different move, invited British National Overseas Passport holders to come and live in Britain. The recurring theme in media coverage is that the law has meant “the end of Hong Kong“… at least as it was once known.

Is this true? In some ways, yes, in others, no. One cannot deny there has been a crackdown that has changed its political landscape, but it is understanding “why” that is really needed here. Arguably, the “colonial Hong Kong,” the legacy left by the British, is being swept away. Going with it is the political identity they created, the concept that Hong Kong is something “exceptional,” “better,” and “different” from China, a sentiment which extends far beyond the question of democracy. But that’s all gone now. The sweeping changes brought by the new law is ultimately redefining Hong Kong as a city loyal to China. Critics like to say this is about “The Communist Party” instead – but it is far more complicated than that simplistic argument.

The imposition of the National Security Law is not about Communism or no Communism, hence Hong Kong remains on an economic level, a hyper-capitalist free market economy, but more so it is a question of political sovereignty over a territory that owing to its past, never accepted itself as part of the country.

This sentiment turned many within the territory to seize on rising anti-China sentiment in the west in the bid to try and undermine this arrangement. Democracy was a value sentiment, but it was also a sugar-coating for a conception of identity too: that Hong Kong ought to have self-determination, as opposed to being part of China. From Beijing’s point of view, it was likewise not about democracy vs. authoritarianism, but their understanding of this city intertwined with the historical backdrop of grave injustices imposed upon the country known as the “Century of Humiliation.”

The national identity narrative of the People’s Republic of China is about “reversing” these “humiliations,” which occurred roughly between 1839 and 1949. The goals include reunifying the country and establishing itself as a modern, prosperous and sovereign state that is able to stand up to western aggression.

Hong Kong is part of this legacy of humiliation. It’s a Chinese territory which was seized by the British in the 19th century. Its subsequent return to China in 1997 is in turn seen as a rightful return, act of restorative justice and a correction of historical wrongs. Of course, critics point out that China was obligated to maintain a “high degree of autonomy” – but the question is who defines “autonomy”?

The idea that the west would ultimately have a “stake” in determining what Chinese sovereignty over Hong Kong constituted is for Beijing a reminiscent of this legacy of humiliation, peddling the idea the west has a right to “protect” Hong Kong from the China that it rightfully belongs to, and is not given a say over its future.

China respects that Hong Kong has a unique economic and social system which remains self-governing in most capacities, yet without national security, Beijing’s argument was that its own sovereignty was, in fact, being undermined. The existence of Hong Kong as a territory politically “disloyal” to the country is unacceptable and a hangover of Imperialism.

As a result, the unrest in the city from 2019, created by this clash of identities, was seen through the prism of foreign powers “egging them on” and attempting to undermine China, not least when many of the ringleaders were actively conspiring with the US.

Take Jimmy Lai and the Apple Daily for example, would the owner of any major US newspaper be tolerated if he was meeting with Chinese senior leaders? Lai had met with Pompeo. In this case, the implementation of the new law was primarily about what it says on the tin: national security, and consolidating the reality that Hong Kong is part of China, it was subsequently used to end a movement which, under the guise of democracy, sought to promote separatism and disorder. China seized its moment in early 2020 with the pandemic at large and took a calculated risk in passing the law.

Arguably, it was a successful one and has paid off. At the cost of a few small blacklisting of officials by the US and no punitive action from anyone else, Beijing was able to easily restore order in the city and affirm its will.

Whilst Hong Kong’s unique free market system will remain, politically it will change and those opposed to China PRC will ultimately trickle out. The new generations born in Hong Kong will additionally be subject to a new pro-China education system. Few understand that, in practice, the national security law is at its heart about consolidating sovereign control through erasing the legacy of colonialism in the city, and no matter how much the UK and US whinge about it, China will never again relent or compromise its national sovereignty over it.