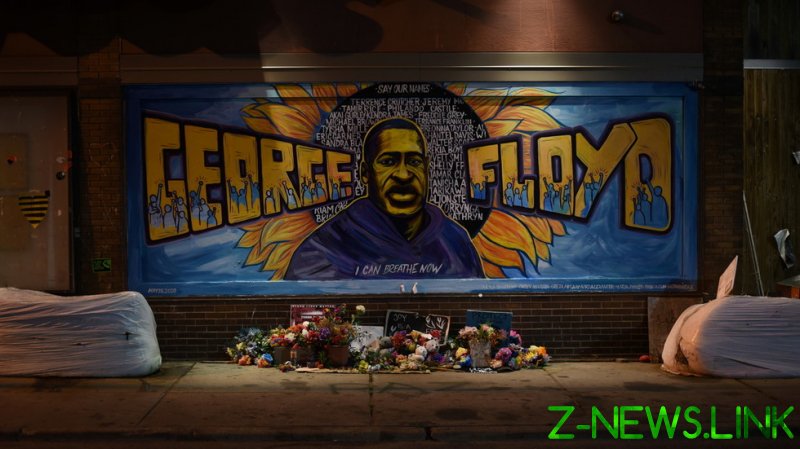 Let’s get one thing straight: George Floyd is no Rosa Parks, no Ruby Bridges, no Martin Luther King. He didn’t summon up the power of passive resistance and change the course of civil rights history by quietly refusing to sit at the back of a bus. Nor did he face down a torrent of racist parents to break the stranglehold of school segregation. And he certainly didn’t sacrifice himself knowingly in pursuit of the “dream” of equality for all.

Reactionaries clearly have a thing about George Floyd, and not just because of his less than righteous character. While the perma-fulminating doyen of the Right, Fox News attack dog and all-round GOP brown-nose, Candace Owens sees a flawed Floyd as imperfect, morally reprehensible and thus somehow unworthy of hero status, he’s little more than a metaphor to her and other Reptards whose real target is what they see as a scheming, devious and conspiratorial Left hellbent on rotting everything it encounters from the inside out.

In the wake of Chauvin’s conviction last month on multiple counts of murdering Mr. Floyd over the course of a nine minute and 29 second “execution” as the Guardiancalled it, Ms. Owens raged against the American criminal justice machine, tweeting: “Prosecutors knew for a long time that George Floyd died from a drug overdose. But they wanted black people rioting and looting across the country…”

One can only assume that Ms. Owens is well-stocked up with tinfoil, canned food and a diesel generator as the idea that US prosecutors plotted killer cop Chauvin’s conviction in some smoke-filled room somewhere, simply to create widespread chaos and anarchy, is so off-grid it makes Roswell UFO, 9/11 truther and moon landing conspiracies look plausible in comparison.

Needless to say, the Left isn’t without sin when it comes to cynically using George Floyd’s death as a trope. While Black Lives Matter and the wider Afrocentric civil rights movement in the US and beyond clearly have a legitimate right to market Floyd’s death as yet another potent symbol of racial inequality, for the purpose of its activism, Joe Biden and the Democrats’ bandwagoning of it is patently less about the 46-year-old addict’s tragic life and more about galvanising the black vote in order to outflank a Republican army emboldened under Trump.

To this end, the death of George Floyd isn’t really about the death of George Floyd but about the rebirth of a distinct form of political “showbusiness for ugly people” activism, which was captured in all its parodic glory in Tom Wolfe’s 1987 novel, ‘The Bonfire of the Vanities’. For the Left, Floyd’s untimely demise and the groundswell of protests it has engendered mirrors the fate of the novel’s Henry Lamb, a sacrificial black youth who dies after becoming the hit and run victim of wealthy WASP stockbroker, Sherman McCoy and his capricious mistress, Maria Ruskin.

The real Floyd and the fictional Lamb alike both find themselves unwitting, and ultimately posthumous poster boys for the Left as opposed to being living, breathing civil rights heroes and cultural icons such as Bridges or Parks, who helped bring an end to systemic school segregation and post-plantocracy Jim Crow laws. And both find a slew of campaigning white liberal lawyers, thrusting district attorneys, cynical politicians, black activists and evangelical community leaders, as well as a rapacious news media hungry to scapegoat an establishment white villain for killing a black man against a tumultuous backdrop of prosaic “black on black crime” – the like of which no one gives a shit about due to the lack of traction such everyday mayhem offers in terms of career advancement, PR or outright financial gain.

In ‘The Bonfire of the Vanities’, Wolfe’s tub-thumping civil rights activist, Reverend Bacon is patently a pastiche of Baptist minister, talk show host, politician and titan of the black community, Reverend Al Sharpton. Sharpton, whose phrase “get your knee off our necks” became a clarion call for black Americans during last June’s Minneapolis memorial for George Floyd, returned to the pulpit days later to give a powerful eulogy at our man’s funeral in Houston, Texas. Tomorrow, Sharpton will lead Floyd’s remembrance rally in Minneapolis. Likewise, Reverend Bacon leads his flock, as well as a bunch of liberal elites, craven media types and a credulous public by the nose against the “white devil” which results in McCoy losing a $12 million civil suit to the Lamb family. The Floyd family, not least because of the spiritual intervention of Sharpton and others, in contrast, managed to relieve the City of Minneapolis of $27 million in damages. Praise the Lord.

Arguably, the Left has found something of an accidental hero in George Floyd, such is his currency, name recognition and, dare I say, civil rights ‘brand’. But through right-wing grifters such as Owens, Tucker Carlson, Ben Shapiro et al and their dribbling shills and nodding dogs on social media, for whom everything is a Marxist conspiracy or left-wing coup waiting to happen, Floyd is also something of a useful idiot. That Floyd was less than a saint makes it easy for the Right to indulge itself in its favourite parlour game: assassinating the character of black men in order to titillate its base into action.

From scaring its fearful, easily suckered constituencies into buying semi-automatic weapons to cajoling it to vote for any bouffant moron who comes along making all the right existential noises, the neo-right needs its George Floyds to shovel its agenda down white people’s throats. In America, for black people, race politics is about economic and social progress – for all; but for those white folks being led over the cliff edge by an increasingly maniacal, irrational and desperate commentariat race is clearly about an end of days extinction complex.

George Floyd may well have been a criminal, a drug addict, a lost soul. But that’s what makes him such a critical figure as the “land of the free” battles with fundamental questions over liberty and the “home of the brave” confronts a political establishment crippled by cowardice. For a nation wrestling with the weight of societal breakdown, corporate greed, widespread corruption, systemic inequality, a moral, cultural malaise and chronic insecurity about its national identity, perhaps it takes a failed man and divisive figure such as George Floyd to bring about reflection and much-needed “healing” to this increasingly Disunited States of America.