Home / WORLD / A viral dance video, a best-selling book and a lead in the polls: Meet the firebrand poised to be Italy’s first female PM

A viral dance video, a best-selling book and a lead in the polls: Meet the firebrand poised to be Italy’s first female PM 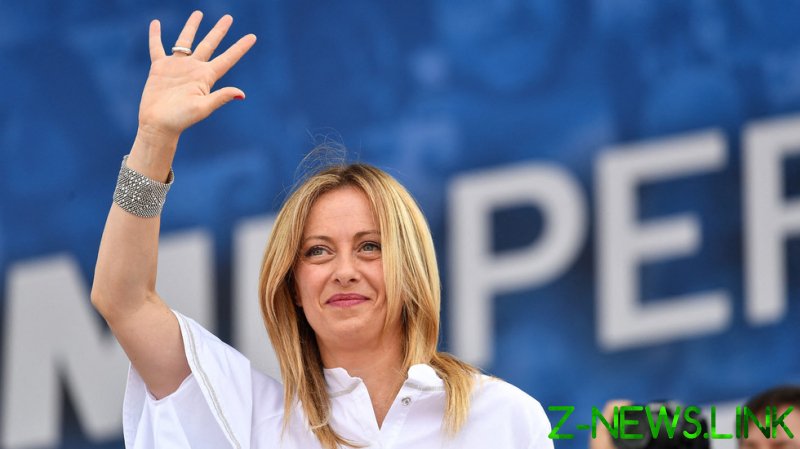 When sisters Giorgia and Arianna Meloni competed as children for their grandfather’s affections by singing the schmaltzy Neapolitan ballad, Parlami d’amore Mariu (Speak to Me of Love, Mariu) over and over, neither dreamt that one of them would one day achieve gold record status… let alone a bestselling book and the prospect of becoming Italy’s first female prime minister.

Even in the tumultuous world of Italian politics where anything can happen, Giorgia Meloni, now aged 44, has had an incredible rise and, with the leader of Fratelli d’Italia (FDI or Brothers of Italy) now poised to take on the highest office in Italy, the liberal establishment is in a panic. This was never meant to happen.

An unmarried mother but with very strong Christian and family beliefs, she has taken the party from less than 2% to a point where recent polls have shown it as the country’s most popular. FDI has overtaken its right-wing rival, Matteo Salvini’s La Liga (The League), which, while it can boast of being part of the governing coalition, appears to have sold out, at least to many who’d previously supported La Liga for its hardline views on immigration and Europe.

Elections are not due until 2023 in Italy, but many observers expect post-pandemic politics will result in voters going to the polls earlier. Can FDI hold on to the momentum? If it can, then FDI and La Liga would be expected to form a coalition of the right, with Meloni the most likely prime minister.

Earlier this year, Meloni chose not to join the current ruling coalition and that decision has seen a surge in FDI support, as right-wing, anti-government sentiment has boosted its popularity; but it’s not the first time that good luck has come the way of the firebrand leader.

When Milanese DJ duo MEM & J sampled one of the FDI leader’s 2019 speeches to a crowd of more than 200,000 in her hometown Rome’s Piazza San Giovanni, and paired it with a thumping disco beat as an LGBTQ response to FDI’s archly conservative messages, the track went viral on social media, soon notching up more than 11 million views on YouTube, reaching gold record status and fulfilling a childhood dream for the unlikely pop star.

A thumping bass accompanied Meloni as she declared, “I am Giorgia. I am a woman, I am a mother, I am Italian, I am Christian. You will not take it away from me!”, and it took off, ironically, in gay clubs across Italy and simultaneously won over the younger TikTok generation, who loved her fresh approach. Hundreds of thousands took up the #iosonogiorgiachallenge. Money cannot buy that reach.

A concerted attempt to mock the politician then backfired spectacularly. As the two despondent DJs said afterwards, “We would have liked anything except that it became an acronym for Meloni.”

But the FDI boss was delighted. So much so that she even named her recently released autobiography “Io Sono Giorgia” (I Am Giorgia), and it rocketed to the top of Amazon Italy’s bestseller list, where it remains.

In recalling the runaway success of the dance track, Meloni says in her book, “[MEM & J] had obviously done it with the intention of overturning its content and satirising it, in order to ridicule its message.  But the piece was too good, too danceable, and in some ways too revolutionary, despite having a political content.”

While the incident proved a stroke of luck, Meloni’s rise up through Italian politics has had more to do with 25 years of hard graft than chance. Her father abandoned the family when she was still young, and while she suffered through weight problems and eating disorders growing up, it was when she found herself involved in student politics that she also discovered herself and jumped in feet first.

While her peers obsessed over fashion, discos and shopping on the Via del Corso, Meloni had her attention elsewhere. “When you have the ambition to change the world, there is no room for anything else,” she writes. “When there’s a whole nation to save, surrendering to your personal desires becomes an unforgivable whim.”

She grew both personally and politically as a key member of the Italian Social Movement and later the National Alliance and now fondly recalls the friendships she made during those formative years, believing the basis of deeply-held political beliefs made for better people.

“I believe that student political commitment is an instrument of extraordinary training for anyone who wants to succeed in life, not only in politics. One must have courage, persuasive ability and quest for truth, there is no room for shyness and hesitation,” she says in her book.

Shyness and hesitation are not characteristics anyone would associate with a woman who, at 30 years old, became the youngest ever minister in an Italian government, when she was handed the youth portfolio by then-PM Silvio Berlusconi.

As a woman isolated not only by her political beliefs but by her sex, Meloni needed bags of self-belief if she was to succeed. She adopted the maxim of Charlotte Whitton, Mayor of Ottawa in the 1950s, who observed, “Women have to do anything twice as good as men to be judged half as good. Fortunately it is not difﬁcult.”

So she delights in calling out former PM Matteo Renzi, who, upon launching his party Italia Viva, proclaimed it to be the most feminist party in Italian history “because he had chosen to put Teresa Bellanova at the helm and Maria Elena Boschi as group leader at the Camere (Chamber of Deputies).

“With us, things don’t work like that. Whether you’re a woman or man, wherever you are you have to get there by ability and not at the discretion of an elite. If a woman succeeds then it is not thanks to a man.”

Not only has Meloni borne the brunt of sexism in the corridors of power, she has also been attacked by the gender warriors of her own sex. Meloni recounts how actress and filmmaker Asia Argento, a high-profile supporter of the #MeToo movement, secretly photographed her dining out in a restaurant and posted the image to social media with the caption “Back fat of the rich and famous shameless fascist spotted grazing.”

For a woman who claims to champion oppressed females everywhere, this was not very sisterly, particularly, as Meloni points out, she was struggling with her weight after giving birth to her daughter just a few months earlier and she took exception to Argento’s snide post on behalf of women in general, not just herself.

This might seem a thin-skinned reaction, but it’s an honest one. No woman likes being criticised for her weight, let alone by an entitled star like Argento. And no woman likes being patronised by men who tell her how lucky she is to have reached a position of power, in a realm they view as exclusively their own, after she has spent 25 years working towards that point.

The situation in Italy is hardly a populist upsurge. Many political and media commenters are quick to label any party not of the establishment with that tag but, in many cases, it’s just not true. The Guardian called Meloni’s rise “alarming,” but the FDI has a long history, with many of its personnel spending time in previous governments. To decry populism, however, validates fears that insurgents are at the palace gates and we are all under threat.

Meloni quotes philosopher Lao Tse in her book, saying “What the caterpillar calls the end of the world, the rest of the world calls a butterfly.”

She might be bold and brash, an argumentative and unconventional conviction politician, a contradictory, single-minded character not to everyone’s taste, but to many Italians sick of the same old careerist faces and inept leaders, Giorgia Meloni might just be that butterfly.