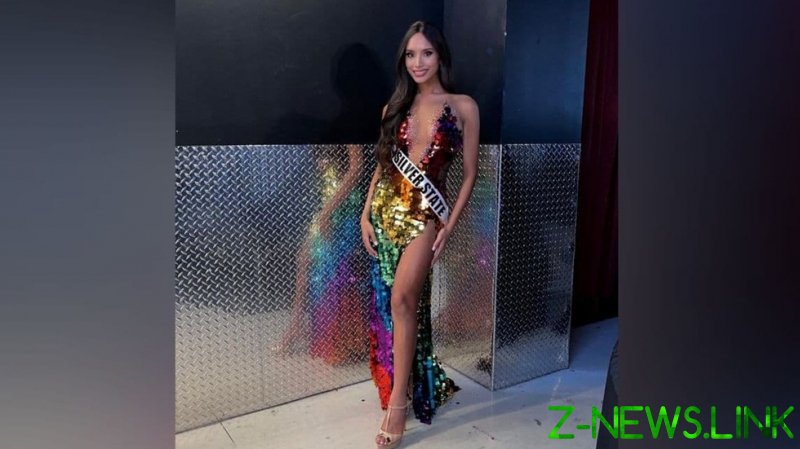 Awesome. I’ve got my make-up bag, a nice frock and a big roll of gaffer tape, so I’m good to go.

Call me weird, abnormal. But it has literally never been my ambition to win a beauty pageant. Plus, well, I always thought maybe it was a closed shop to someone like me, you know? On account of me being, well, a bloke, a dude, a man.

I’d take to the stage to be examined by those brutal judges and I’d be carrying the wrong equipment, if you get my drift. And there’s only so much you can do with gaffer tape when you’re wearing a bikini, right?

I’m in with a genuine chance in this woke world we’re falling into face-first, though. So, hey – as long as I can have a go pre-op, I’m in, I’m game, I’ll have a bash! Why not?

But not if I have to become a eunuch. Oh no. There’s only so far I’ll go for a story. A man needs to have his limits, and I, like most men, am rather attached to the family jewels.

Kataluna Enriquez, 27, has forged the way. She won Miss Nevada at an event in Las Vegas on Sunday, and has her sights set on America’s top beauty pageant in November: Miss USA. She’s genetically a fella, same as me. Awesome. However, I don’t know whether she’s had the required surgery yet – surely yes?

She beat 21 other hopefuls, and presumably they weren’t all trans. It’s Pride month, though, and maybe that was a disadvantage for the also-rans, if those judges felt the need to make a wokey statement.

“No words can describe how much I am grateful of you,” Kataluna oozed to her ‘pageant mommy’ on her Instagram feed. “Huge thank you to everyone who supported me from day one. My community, you are always in my heart. My win is our win. We just made history. Happy pride.”

CNN in the Philippines says Ms Enriquez is a Filipina-American. Aha! This makes it all a hell of a lot clearer to me then.

I was a correspondent for two years in Manila a while ago and did a fair few stories on ‘ladyboys’, as they were called down there at the time. Hey, Twitter mob! Drop your digital pitchforks (for now), as I didn’t coin the term! It’s really what they were called, even among themselves. And, I have to say, if you stood a genetically female beauty queen next to a ‘ladyboy’ beauty queen, not many people could have told the difference between the two. It was, I have to say, a little unnerving.

It’s not the same in Europe. Nope. No way. Not in my albeit limited experience. On Sunday, for example, there was a Pride march near my house and there was an elderly bloke – he was at least 70 – who had basically just thrown on a wig and a dress and was tottering around on high heels, struggling to keep up with the other marchers. Also – and don’t ask me why – he had a cushion rammed up his blouse as if he were pregnant. That was wrong on so many levels – even if he were capable of gestating a foetus, he was way too old.

Lately, it seems the direction of travel is men – blokes, dudes, chaps, fellas like me – muscling in on female terrain. Take Laurel Hubbard, for example, who made headlines across the world recently after being picked for the female New Zealand weightlifting team despite having gone through puberty as a man.

And what about transgender women – that’s trans folk born male – wanting to be banged up in all-female jails? I’ll tell you something: I’d much prefer to be locked up in a female jail too. Next time I get arrested, I’ll make sure I have a frock in my bag.

Come on, though, girls – don’t give up hope. And there are options for you guys, too. There’s activity in the other direction – take blogger and weightlifter Aydian Dowling, for example, or Chaz Bono, born as a daughter, to pop duo Sonny and Cher. Or Thomas Beatie, the world’s first-ever pregnant ‘man.’ There’s loads of role models!

Is boxing your thing? Well then, you can ‘float like a butterfly and sting like a bee’, just like Muhammad Ali. Hmm, not quite, but you can be a bit like Patricio Manuel, the first transgender male to fight in a professional boxing match in the US.

Oh, wouldn’t Patricio and Kataluna make a wonderful couple? One coming from one direction, the other coming from the other direction. Pow! Kataluna won her beauty pageant in Las Vegas, and Vegas is a boxer’s kinda town. They could get married in any number of non-conventional ceremonies – getting hitched by Elvis is a perennial favourite. Or I could dress up as a trans Elvis – that’d be a bit different. Give me a call, guys. I’m in if you are.