Home / WORLD / A third of US liberals want ‘weaker arguments’ to be given less coverage by the media, but who decides which views these are?

A third of US liberals want ‘weaker arguments’ to be given less coverage by the media, but who decides which views these are? 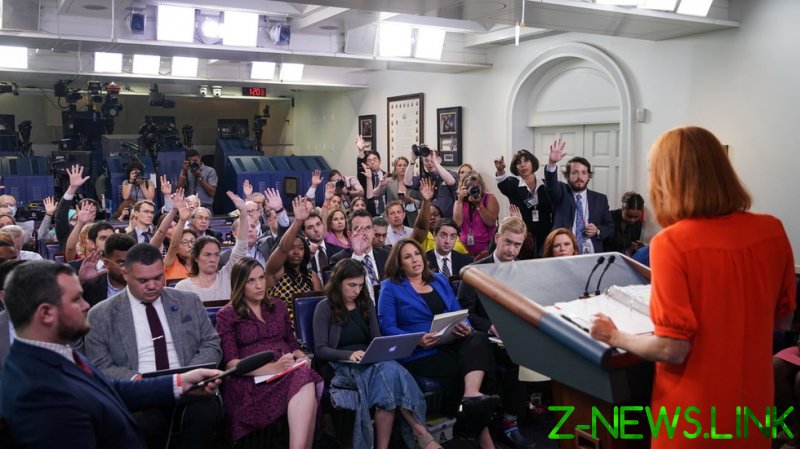 According to the survey from Reuters Institute, a majority of people want a wider range of views in their media and a sizable portion want what they deem to be “weaker arguments” to be given less airtime.

The study, based on a focus group of “politically and racially/ethnically diverse” people regularly engaged with the news, found that 69% of US consumers want media organizations to present a “range of views and leave it up to people to decide.” Respondents in the UK, Germany, and Brazil responded even more favorably to this philosophy.

Where the results get more concerning is when participants were asked whether networks should be giving “equal time” to all sides of a debate. A majority, including over 60% in the US again, said that equal time should be given to different sides of an argument, and only 15% said that “weaker arguments” should not be given equal time.

That number increases significantly when results are divided into left and right. “Sizable majorities on the political left,” the survey found, are more vigilant in what opinions they believe should be given a platform. In the US, 35% responded by saying they believe “weaker arguments” should not be as tolerated. Only 5% of conservative respondents agreed with this sentiment. Results were fairly similar for Germany (24%/10%) and the UK (22%/10%). It is sadly ironic that the US, a country that prides itself on free speech protections, has the highest number of people looking to silence arguments.

You may find yourself asking: what is a ‘weaker argument’ exactly? Wouldn’t such a statement be based entirely on opinion?

Topics mentioned in the Reuters study that participants found did not need a wide range of opinions included Covid-19 vaccinations, Donald Trump’s claims of a fraudulent election, and climate change.

In other words, a growing number of liberals are aligned with the current administration in that ‘weaker argument’ is just another way of saying ‘misinformation’.

According to President Joe Biden, Facebook is “killing” people by allowing “misinformation” about Covid-19 vaccines to be published. Cryptically saying they have identified 12 people recently as the biggest spreaders of Covid-19 misinformation, the White House has attempted to pressure social media companies like Facebook into essentially punishing political speech they don’t approve of.

If ‘misinformation’ were truly the concern, the White House would publicly identify these 12 people and present specific arguments against something they feel is factually wrong. To simply deem something ‘misinformation’ and demand it be kept from the public as a matter of life and death is a dangerous precedent to set.

Following the White House’s push on social media ‘disinformation’, faithful press allies were quick to muddy the waters by targeting specific conservatives who have robust followings on Facebook. NPR found themselves facing waves of criticism after they published a hit piece on Ben Shapiro and his Daily Wire site, seemingly tying them to the vague argument that misinformation is spreading on Facebook, but admitting in their own text that the site “rarely posts falsehoods.” The trouble with the content, NPR argued, is that it is “overtly conservative” and has a specific – and clearly admitted – viewpoint.

The theory that Covid-19 may have started in a Wuhan lab was once ‘misinformation’ and a ‘weaker argument’ from those pesky conservatives no one wants to hear from. Facebook went as far as to start policing posts that suggested the ‘conspiracy theory’ was correct. Today, that decision has been reversed and the ‘conspiracy theory’ has evolved into a mainstream discussion.

Then there’s the infamous Hunter Biden laptop. It was a damning story from the New York Post that was quickly suppressed by social media platforms like Twitter who claimed the Post was violating their terms by breaking some vague rule about posting hacked materials. It was nonsense, but it gave the media an excuse to ignore the story and pretend a whistleblowing ex-business partner and hordes of alleged emails suggesting corruption were a ‘conspiracy theory’ built by Biden critics. Months after this, Hunter Biden was blessed with some gushy mainstream media interviews and he essentially shrugged off the scandal, and even admitted it was entirely possible the laptop was his, something numerous pundits were quick to dismiss when the story first dropped.

People’s instinct for wanting more information and viewpoints available so they can make their own informed opinion shows us that at least most know that when choosing between more and less information, more can be better, especially if the alternative is having to rely on the government or Silicon Valley to decide what information you should see. The sizable number of liberals who believe some arguments should be silenced is one that can only end in enabling an administration like the current one to decide what opinions and information are and aren’t in the best interest of the public.

That’s a dangerous idea, no matter who is in office, because ‘weaker arguments’ and ‘overtly conservative’ viewpoints to one liberal are punishable ‘misinformation’ to others, and those ‘others’ happen to be in the White House right now.